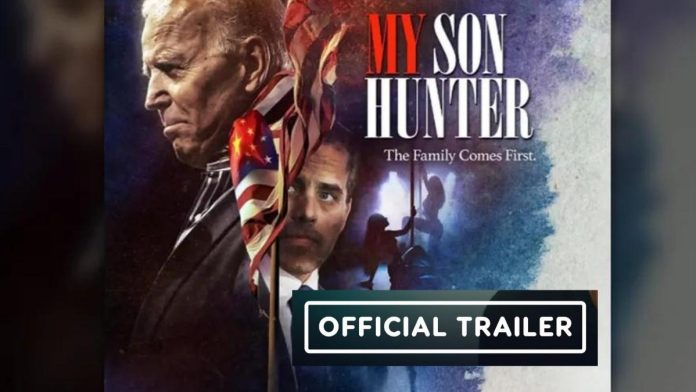 of US President Joe Biden’s son, Hunter Biden, in Central Europe, Russia, and Communist China. The producers say the film will depict Hunter Biden’s “lifestyle” as well as his foreign business dealings.

Since its release on Thursday, the full trailer for My Son Hunter, a film depicting the alleged life stories of Hunter Biden and his father, President Joe Biden, has received 1.3 million views on Twitter as of Saturday afternoon.

Toward the end of the trailer, the words “witness the sensational, bombshell, unbelievable, scandalous, corrupt, censored, shocking true story” of the Biden family appear on the screen.

According to the film’s website, Laurence Fox plays Hunter Biden and John James plays President Biden in the film, which is directed by Robert Davi. The film is set to be released on September 7.

Gina Carano’s Secret Service agent, who also serves as narrator, tells the story. Some disturbing scenes include James, who plays Biden, sniffing Carano’s hair and kissing her on the neck, as well as images of President Biden standing uncomfortably close to women and children, which immediately raises Americans’ concerns.

More about the movie

The Hunter Biden movie directed by Bond villain Robert Davi starts off with the words, “This is not a true story, except for all the facts.” Director Davi has gone to great lengths to successfully create a visually stunning surrounding to portray Hunter Biden on full display.

My Son Hunter depicts high-level corruption and immorality in the Democratic Party, the federal government, and the “news” media. Adult viewers, on the other hand, are advised to proceed with extreme caution due to immoral carnal behavior, images of women dressed inappropriately, and strong foul language. The film’s initial announcement mentioned a private crowd funding site where it hoped to raise 2.5 million dollars. The project has currently raised over 2.5 million dollars through crowd funding, according to its official website. In Serbia, production began in October 2021 and lasted four weeks. The film is being distributed by Breitbart News, an American far-right media company. Gina Carano, who plays a secret service agent in the film, stated, “The script was instantly intriguing and side achingly hilarious to me, especially after being newly exposed to the political realm in 2020. Robert Davi is someone who reached out to me as soon as I was ‘cancelled’ in Feb. 2021. I signed on in support of him and one of my favourite humans, Laurence Fox.”

The film, which is being released and distributed by the conservative website Breitbart, follows Hunter Biden as he deals with a variety of issues in his life, including drugs, Chinese spies, Ukrainian oligarchs, and international business deals.