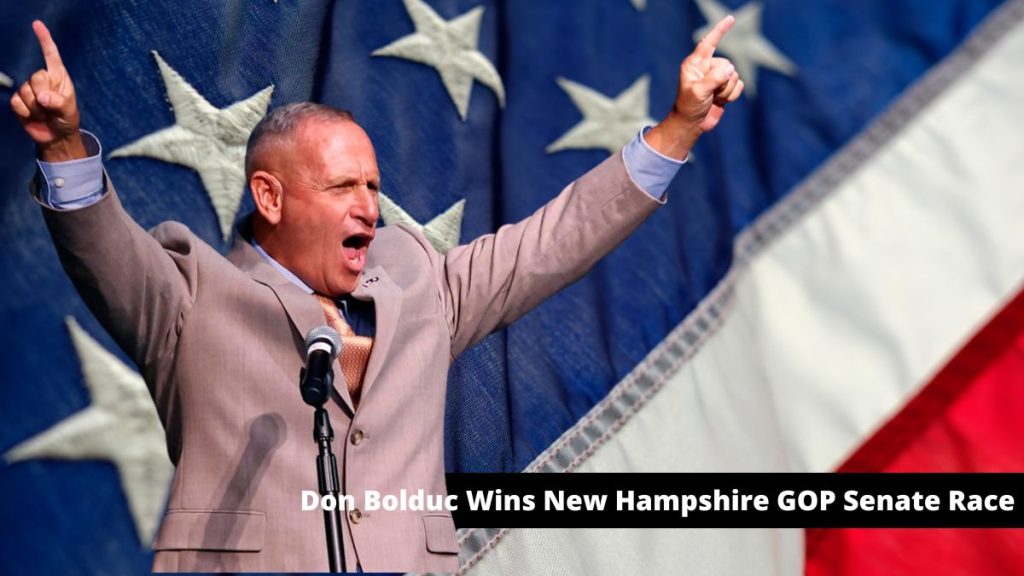 Don Bolduc Wins New Hampshire GOP Senate Race – Voters in New Hampshire selected Don Bolduc to compete against Democratic incumbents for Congress in one of the last primaries of 2022. He prevailed by a microscopic margin.

In November, Democratic incumbent Maggie Hassan will square off against Don Bolduc.

Mr. Bolduc defeated Chuck Morse, the president of the New Hampshire state senate and a moderate Republican backed by Governor Chris Sununu, who referred to him as “the candidate Senator Hassan is most afraid to face.”

Republican primary voters in New Hampshire have chosen candidates Don Bolduc, Karoline Leavitt, and Robert Burns, who have all attempted to associate themselves with former President Donald Trump, in three crucial primaries.

Instead of beginning the primary season for this year’s midterm elections, New Hampshire, which is famed for doing so for presidential races, finished it. In Rhode Island and Delaware, where Biden flew late on Tuesday to cast his vote, the races weren’t as widely publicized.

Mr. Bolduc posted a tweet resplendent with gratitude for his supporters. “I am grateful for the trust Granite Staters placed in me tonight, and I pledge to ALWAYS be their champion in Washington. God, Family, Community, and Country. God bless you all…And LIVE FREE OR DIE!” the tweet reads.

I am grateful for the trust Granite Staters placed in me tonight, and I pledge to ALWAYS be their champion in Washington.

God bless you all…

From Arizona to Florida and Michigan to Maryland, Trump backers have won primaries. Several Republican incumbents who have openly opposed Trump were defeated.

Now they must demonstrate that they can win over the more moderate voters who frequently participate in general elections.

It was interesting to note that some Democratic organizations paid for primary commercials endorsing Bolduc in the belief that he would be Hassan’s relatively less onerous challenger.

Democratic-aligned groups have supported pro-Trump candidates in significant contests around the nation, a move that some have criticized as having the potential to backfire if those candidates go on to win their general elections.

Bolduc was not formally endorsed by Trump, although Trump was quoted hailing him as a “strong guy, a tough guy.”

In the 1st Congressional District of New Hampshire, where Leavitt, a former press secretary for Donald Trump, defeated several more seasoned Republicans with ties to the former president, many of the same forces affecting the former president were also in play on Tuesday. She will compete against Democratic Rep. Chris Pappas in a potentially close election in November.

Having just turned 25, Leavitt may be one of the first members of Generation Z to serve in Congress. She stated that she was “sending a strong and clear message to the Washington, D.C., establishment, and our Democratic opponent that our votes cannot be bought, our conservative voices can not be silenced.”

She also attacked Pappas, claiming that he “has campaigned his entire political career as a moderate, bipartisan voice for our district. But he has voted as a far-left socialist Democrat.”

Pappas was also quick to turn on Levitt, saying, “I will fight with everything I’ve got to stop extreme politicians like Karoline from hijacking our democracy.”

An onerous race ahead

The midterm campaign’s dramatic finale for the primaries took place. Republicans have centered much of their election-year messaging on Biden and his handling of the economy, notably the rising cost of living.

But as the race nears its conclusion, Democrats are feeling cautiously optimistic as Biden’s approval rating holds steady and inflation slows for the second straight month, albeit still being high.

Democrats may have the motivation they need to reverse the defeats that traditionally follow a new president’s first midterm elections after the Supreme Court’s decision to invalidate a constitutional right to an abortion as a result of its ruling.

Last month, Mitch McConnell, the leader of the Senate’s Republican party, acknowledged the difficulty, suggesting his party could have a better chance of ending Democrats’ tenuous hold on the House than the Senate. He lamented that “candidate quality” might influence some results in his chamber.