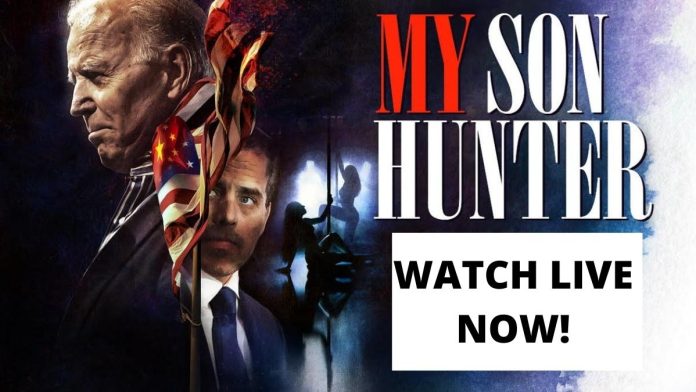 My Son Hunter is a biographical drama about US Vice President Joe Biden and his son, Hunter Biden, and their business dealings in Central Europe, Russia, and Communist China. The producers say the film will depict Hunter Biden’s “lifestyle” as well as his foreign business dealings. Breitbart Media, a right-wing conservative publication, distributes the film.

My Son Hunter follows a narrative style and is intentionally funny, with animated interludes and characters speaking directly to the audience in a style reminiscent of the hit TV show The Office. The audience at Wednesday’s screening laughed at the beginning of the film, where a disclaimer says: “This is not a true story. Except for all the facts.” The release date for the movie My Son Hunter is 7th September 2022.

There is no confirmation yet if the movie will be available on online streaming platforms such as Netflix on Amazon Prime.

“I don’t believe any voice should be held down in America, as the left is doing”… Inside the private screening of the Hunter Biden Movie

The My Son Hunter movie was screened in a private, invitation-only screening room in Los Angeles on Wednesday without the pomp that premieres like these are usually characterized by. There was no red carpet or hoards of photographers according to reports. Guests were served just popcorn and water instead of the usual sushi and martinis.

The cast of the movie was also absent, and director Robert Davi addressed the attendees virtually through a Zoom meeting. In a separate statement to a major news outlet, Davi said, “I don’t believe any voice should be held down in America, as the left is doing… In Hollywood today, most conservatives are afraid to speak up. That has got to change.”

Nevertheless, the movie received a standing ovation with praises pouring in for the courage of producers Phelim McAleer and Anne McElhinney, and several of the attendees had positive remarks about the My Son Hunter movie.

A famous producer who wished to remain anonymous said he enjoyed the movie but said that “it’s a shame I can’t tell most of my colleagues about it, though. Hollywood is in such a hyper-cancel mode today.”

Lois & Clark actor Dean Cain said in a statement, “This Hunter Biden situation is a story that needs to be told, and it hasn’t been by the mainstream media. This is unprecedented. The media was in bed with Joe Biden and wanted the last election to go a certain way.”

President Joe Biden, who has repeatedly denied the accusations made against his son, has declined to make any comment on the movie several times. The film is directed by Robert Davi and developed by conservative Irish filmmakers Phelim McAleer and Anne McElhinney via crowdfunding. The movie was shot in Serbia because of its “resemblance to Ukraine” according to McAleer. “To accurately depict Hunter Biden’s life, you need strip bars and a lot of beautiful women. Serbia has a lot of both,” McAleer further explained.

Gina Carano, in a statement referring to the script for My Son Hunter, said, “The script was instantly intriguing and side-achingly hilarious to me, especially after being newly exposed to the political realm in 2020.”