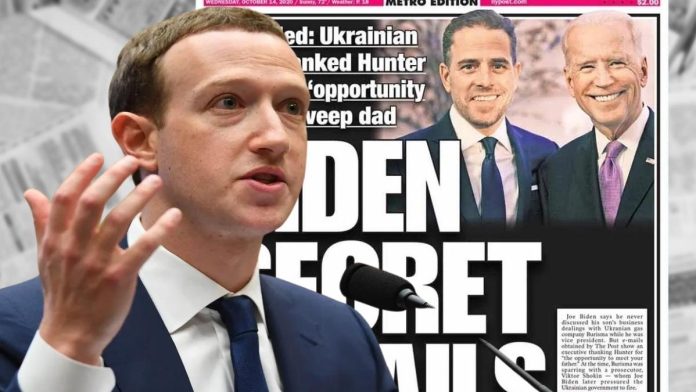 In yet another classic example of ‘big tech tyranny’, Facebook founder Mark Zuckerberg revealed that on the request of the FBI, the social media company had algorithmically censored the Hunter Biden laptop story for an entire week.

During a recent episode of the Joe Rogan podcast, the Facebook founder was asked by host Joe Rogan about how the social media company handles controversial topics like the one on US President’s son Hunter Biden’s laptop. Zuckerberg replied saying that the FBI approached some people on the team and requested that they be “vigilant” as there might be some ‘false propaganda content’ similar to the Russian hoax in 2016. “They (FBI) were like, hey, just so you know…you should be on high alert. We thought there was a lot of Russian propaganda in the 2016 election, we have it on notice. That’s basically… there’s about to be some kind of dump that’s similar to that. So just be vigilant.”

Zuckerberg, while slamming its rival Twitter for completely shunning the topic, admitted that Facebook had decreased the reach for the Hunter Biden laptop story by censoring it for almost a week. “So our protocol is different from Twitter. What Twitter did is…they said… you can’t share this at all. We didn’t do that. What we did was…if something is reported to us as potential misinformation…important misinformation, we also run third-party fact-checking programs because we don’t want to be deciding what’s true and false and…I think it was five or seven days when it was basically being determined whether it was false, the distribution of Facebook was decreased, but people were still allowed to share it,” Zuckerberg said.

He added later that the story could still be shared and consumed, but the distribution of the story had been decreased by lowering the ranking and newsfeed.

Amid the controversy surrounding the laptop, Republicans accused Facebook of suppressing conservative voices.

“We kind of thought, hey, look if the FBI, which I view as a legitimate institution in this country…they come to us and tell us that we need to be on guard about something, then I want to take that seriously,” said Zuckerberg. According to a major news outlet, over 50 former senior intelligence officials signed a letter claiming that the laptop story “has all the hallmarks of a Russian information operation.”

When Joe Rogan asked if Zuckerberg regretted Facebook’s response to the story, he said, “Is there regret for not having it evenly distributed and for throttling the distribution of that story?”

In 2020, a major news outlet published an exposé revealing the existence of tens of thousands of emails between US President Biden‘s son Hunter and business associates from Ukraine. According to the exposé, the emails revealed how Biden’s son used his political connections in his overseas business dealings. Three weeks before the 2020 US presidential elections, Sohrab Ahmari, the op-ed editor of the New York Post, revealed that Twitter was no longer allowing him to post stories about “corruption by a major-party presidential candidate, Biden.”

Following Twitter’s refusal to allow the New York Post’s Biden article, US President Donald Trump took to Twitter and wrote. “So terrible that Facebook and Twitter took down the story of “Smoking Gun” emails related to Sleepy Joe Biden and his son, Hunter, in the @NYPost. It is only the beginning for them. There is nothing worse than a corrupt politician. REPEAL SECTION 230!!!”