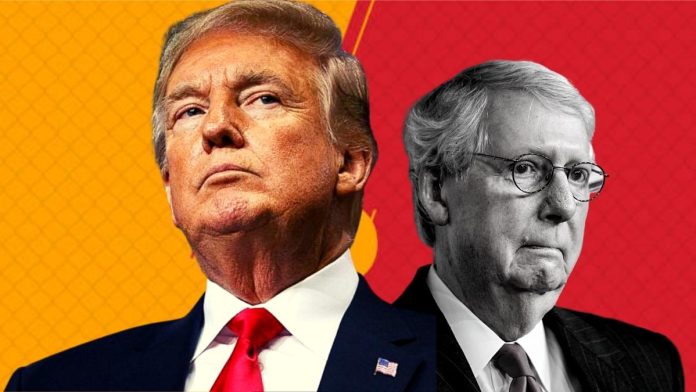 In the latest development of the Trump-McConnell rivalry, ex-President Donald Trump lashed out at Senate Minority Leader Mitch McConnell and his wife in a Truth Social post over McConnell’s stance on the former President’s Senate endorsement picks. “I think there’s probably a greater likelihood the House flips than the Senate. Senate races are just different — they’re statewide, [and] candidate quality has a lot to do with the outcome,” said McConnell last week on Thursday.

The comments about “candidate quality” did not sit well with former president Trump, and he lashed out at the Senate Leader in a Truth Social post, calling him a “broken down hack politician.”

“Why do Republicans Senators allow a broken down hack politician, Mitch McConnell, to openly disparage hard working Republican candidates for the United States Senate? This is such an affront to honor and to leadership,” wrote the former President on his Truth Social media.

The erstwhile President also targeted Mitch McConnell’s wife in the same Truth Social post, calling her “crazy” and asking McConnell to stop helping her and her family “get rich in China.”

“He should spend more time (and money!) getting them elected, and less time helping his crazy wife and family get rich in China!”- read the former President’s post.

The Senate Leader’s wife, Chao, has previously served as Donald Trump’s Transportation secretary until she resigned from the post after the riot at Capitol Hill on Jan 6. Chao said that the riot “deeply troubled me in a way that I simply cannot set aside.”

Chao’s family has ownership of a shipping company named ‘Foremost Group‘ based in China. She has no official ties with her family’s shipping business but has been faced with allegations several times whilst serving the former President’s Cabinet. The accusations of conflicts of interests indicated that Chao used her position as a Cabinet minister to help her family business.

Former president Donald Trump has publicly expressed his disappointment with Mitch McConnell several times. The Trump-McConnell feud has its roots way back in 2017 when it first caught the media’s attention over a health bill.

It is speculated that the feud was kick-started by McConnell himself when he expressed doubts about the former President and whether he could salvage his presidency. “Our new president has, of course, not been in this line of work before, and I think had excessive expectations about how quickly things happen in the democratic process,” said McConnell at an event in Kentucky in early August 2017.

Rumors indicate that McConnell has been critical of then-president Trump in private as well, expressing doubts over his ability to hold office.

The rivalry between Donald Trump and Senate Minority leader Mitch McConnell became a full-fledged public feud when McConnell failed to pass Mr. Trump’s legislative agenda. The former President expressed his disappointment in Mitch McConnell, saying that the Senate’s failure to pass a health bill by just one vote was a “disgrace.”

The rivalry has only grown deeper since, and Mitch McConnell, in the former President’s eyes, has been reduced to a “dour, sullen and unsmiling political hack.”