Trump agrees with a post on Truth Social which predicts a civil war in the U.S 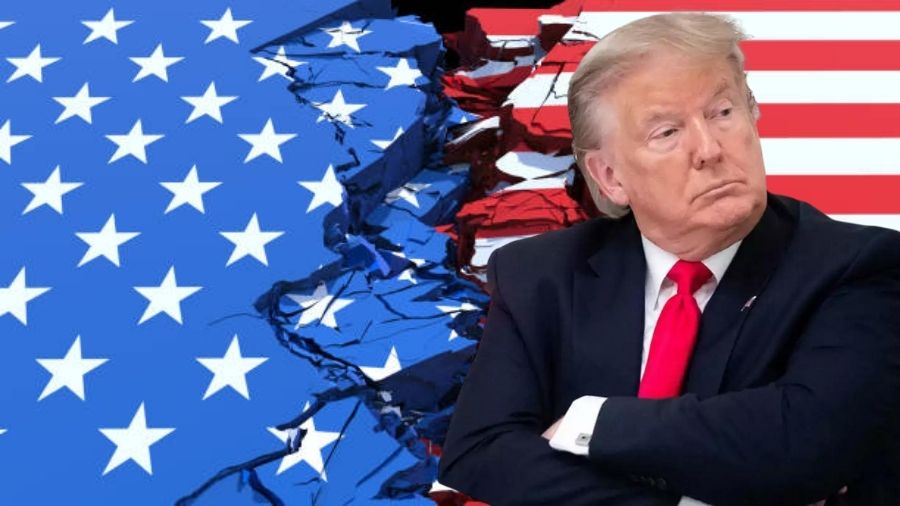 Trump agrees with a post on Truth Social which predicts a civil war in the U.S

Former President Donald Trump reshared a post on Truth Social that seemed to predict that the United States was headed towards a civil war because of an “enemy from within”.

A Truth Social user with the username “MAGA King Thanos” quoted a Truth post from Fox Nation host Lara Logan that was a screenshot of Nayib Bukele’s tweet. The post was ‘retruthed’ by Trump.

Bukele is the millennial President of El Salvador — a controversial figure who once took to his Twitter bio to declare himself “the coolest dictator in the world.”

El Salvadoran President Nayib Bukele had previously posted on his official Twitter account ‘The most powerful country in the world is falling so fast, that it makes you rethink what are the real reasons. Something so big and powerful can’t be destroyed so quickly unless the enemy comes from within.’  He was quoting an op-ed article published by Bloomberg titled ‘Inflation Stings Most If You Earn Less Than $300K. Here’s How to Deal.’

Prices are now 8.3 per cent higher than a year ago as of April, and gas prices have risen for two weeks in a row, reaching a record high of $4.60 per gallon on Monday. Bukele’s hardline immigration stance has brought him into conflict with Trump, causing tensions within the Biden administration.

The State Department released a statement in April expressing concern about threats to press freedom, and spokesman Ned Price added on Twitter, “The U.S. government continues to support El Salvador in its efforts to reduce the proliferation of gangs. We urge El Salvador to protect its citizens while also upholding civil liberties, including freedom of the press.”

Bukele responded, saying that El Salvador only got support to fight crime under the administration of Donald Trump and that now only the civil liberties of the gangs are getting support from the US.

“The U.S. government continues to support El Salvador to reduce the proliferation of gangs’. Really? Yes, we got support from the U.S. government to fight crime, but that was UNDER THE TRUMP ADMINISTRATION. You are only supporting the gangs and their ‘civil liberties’ now.”– Bukele wrote.

The erstwhile president’s post on Sunday received an onslaught of backlash from his critics.

Illinois Republican Rep. Adam Kinzinger who is one of the staunchest critics of Trump within the GOP, wrote on Twitter, “Any of my fellow Republicans wanna speak out now? Or are we just wanting to get through ‘just one more election first…?”

Rep. Eric Swalwell, D-Calif. wrote, “Donald Trump is calling for Civil War. Of course, like Vietnam and the walk to the Insurrection, he won’t be man enough to fight it.”

Anti-Trump conservative George Conway wrote on Twitter, “Nothing to see here. Just a former president of the United States sharing a social media post advocating or predicting civil war in the United States. No biggie.”

Another recent storm created on social media by the former president last Friday came when he said in another post on Truth Social that Elon Musk buying up Twitter is “probably illegal.”

‘Gee, Elon Musk never told me that until now he voted for Democrats. Actually, it was quite the contrary, but now it seems, with all of his problems with a probably illegal  purchase of Twitter he wants to be a Republican because the Dems are “a party of hate.” I could have told him that a long time ago, but actually they are a Party of sickness, greed, corruption and absolutely horrible policy. Good luck Elon, have fun!!!’ –Trump posted on Truth Social.

Although Musk has promised to allow Trump to return to Twitter if his buyout is successful, Trump has repeatedly stated that he will not return, and his post on Friday was the latest indication of that.

Also read| Elon Musk will vote for Republican party in 2024

Trump was banned from Twitter on January 6, 2021, following his loyalists’ attack on the US Capitol, after the company claimed he violated their ban on glorifying violence.
He lashed out at Musk as his own social media venture faces increased competition if Musk acquires Twitter and allows previously banned conservatives greater access to the site.