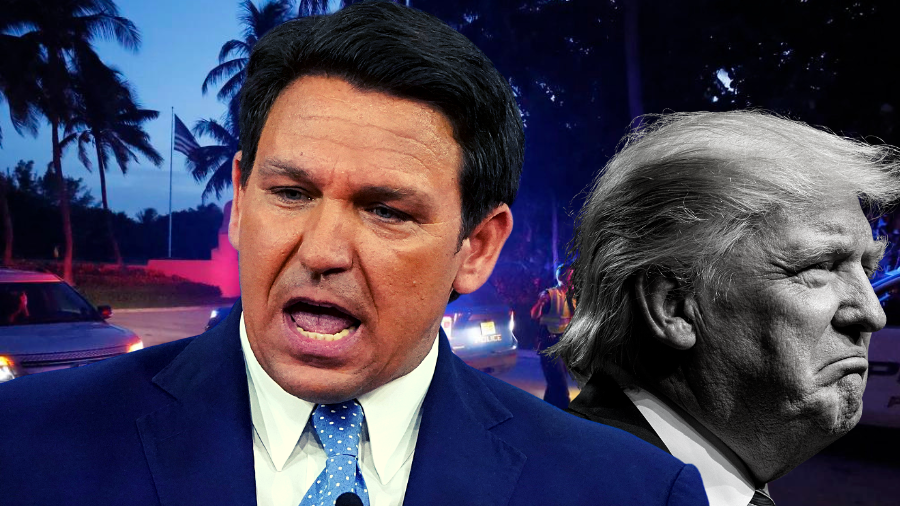 During the event hosted by conservative group Turning Point Action, Florida Governor Ron DeSantis spoke for about 45 minutes in support of Republican Senate nominee Blake Masters and Republican gubernatorial nominee Kari Lake, both of whom were backed by former president Trump before their primaries. DeSantis compared last week’s events at Mar-a-Lago to the FBI’s investigation into Hillary Clinton’s use of a private email server while she was serving as Secretary of State. “And you look at the raid and Mar-a-Lago, and I’m trying to remember, maybe someone here can remind me about when they did a search warrant at Hillary’s house in Chappaqua when she had a rogue server and she was laundering classified information,” DeSantis said.

The Florida Governor also mentioned recent threats made against Supreme Court justices in the run-up to the Court’s decision to overturn the historic Roe v. Wade decision. DeSantis brought up the recent incident where a man was charged with an attempt to murder after showing up near Justice Brett Kavanaugh’s house and admitting his attempt to kill him.

In addition, he also mentioned recent vandalism and attacks on anti-abortion pregnancy centers in the aftermath of the court’s decision.

“What I hope we see if Republicans take majorities is use the power that you have under the Constitution to bring accountability to a bureaucracy that’s totally off the rails,” said DeSantis. The Florida governor made his entrance to the “Real American” theme song of former pro wrestler Hulk Hogan, a new flourish, declaring that Republicans would “fight back” on Election Day. At the rally, DeSantis urged Arizonans to “be united against the Democrats,” and the Republican Governors Association along with the National Republican Senatorial Committee to be “all in” on this election. “Once areas go left, buckle your seatbelt. It’s not going to be an easy ride. I don’t want to see that happen in Arizona,” DeSantis said.

DeSantis, who was elected governor of Florida in 2018, has become a national figure for, among other things, signing the “Don’t Say Gay” bill, rolling back trans protections, and opposing mask mandates during Covid.

During the Turning Point Action rally with Ron DeSantis, Arizona gubernatorial candidate Kari Lake captivated the audience with her “high-minded admiration” for the Florida governor’s qualities.

“I’ll tell you what he’s got,” Lake said. “I don’t know if you heard of this, but he’s got BDE. Anybody know what that means? Ask your kids about it later.”

The ‘BDE’ comment did not sit well with many people, including former legal aid to Donald Trump, Jenna Ellis. A while after Kari Lake made the comment, Ellis tweeted, “Am I the only young conservative who thinks this kind of rhetoric at a TPUSA event is grossly inappropriate?” In a statement released later, Ellis said that she continues to support Kari Lake wholeheartedly, clarifying that what she doesn’t agree with is the notion that “strong conservative women must make explicit sexual innuendo in order to connect with a young audience or be popular,” Ellis said, adding that she too has said and tweeted things in the past that she regrets, and hopes that Kari does the same thing. “ I admire what she is doing in Arizona and look forward to her victory in November,” the former Trump legal advisor stated further.