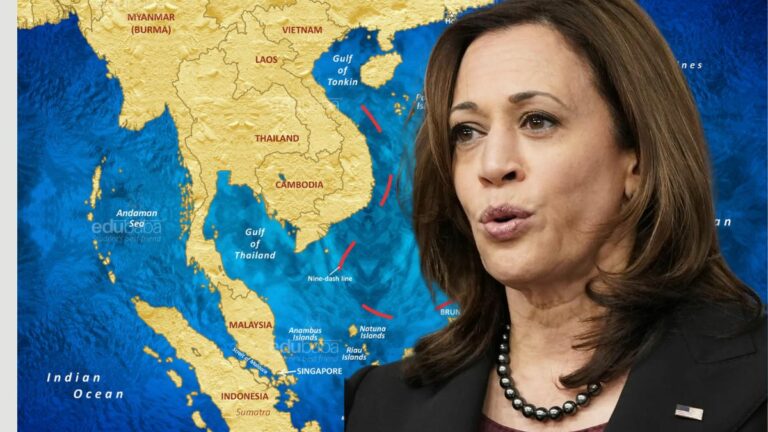 Kamala Harris is to visit Contentious South China Sea Island. During a tour to the Philippines, U.S. Vice president Kamala Harris will illustrate America’s allegiance to safeguard its treaties by flying to an island territory facing the clashed South China Sea, where Washington has blamed China for provoking smaller nations.

Later this week, Kamala Harris will visit Palawan territory, where she will be the highest-ranking U.S. leader to visit the frontier island at the front line of the long-seething territorial including China, Philippines, Vietnam, Malaysia, Brunei, and Taiwan.

Commodore Armand Balilo, the Coast guard Spokesperson, said that the Philippines coast guard is expected to welcome Kamala Harris on board one of its largest patrol ships. It is in BRP Teresa Magbanua, Palawan, where she will also deliver a speech.

Philippine Ambassador said to Washington Jose Manuel Romualdez that Harris’ trip to Palawan depicts the level of American support to an associate and concern over China’s actions in the debated sea.
6T6
Romualdez told The Associated Press, “That is as obvious as you can get, that the message they’re trying to impart to the Chinese is that ”we support our allies like the Philippines on these disputed islands.”

Beijing and Washington have been on a destruction course in the contested waters for a long time.

Kamala Harris spoke with Chinese leader Xi Jinping in detail over the weekend while moving into a closed-door conference at APEC. She was asked if she had talked about Taiwan or North Korea; in response to this, Kamala said that they talked about “keeping open lines of communication.”

Harris will also meet the daughter of Marcos’ forerunner Rodrigo Duterte Vice President Sara Duterte. She has saved her father’s deadly “War on Drugs” that left thousands of suspects dead and scintillated an International Criminal Court inquiry as a potential crime against humanity.

Kamala Harris has planned a meeting with civil society reformers to bring the commitment to light and continued support of the U.S. for human rights and democracy after she met with Marcos Jr.