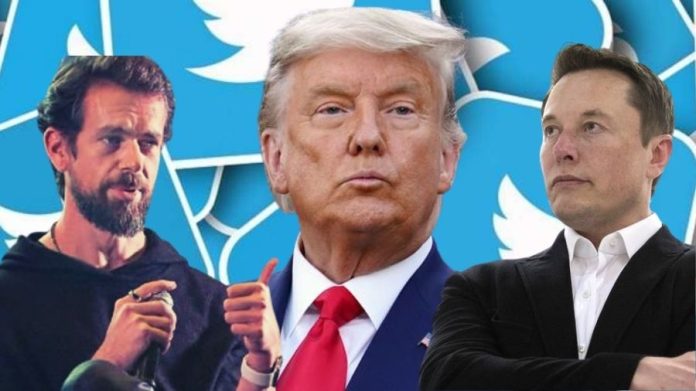 The co-founder of Twitter Jack Dorsey admits to his mistake of banning former President Donald Trump from Twitter. Jack adds that banning Trump was a ‘bad business decision.’ Dorsey agrees with Tesla CEO Elon Musk that Donald Trump’s Twitter account should be restored. Although Jack Dorsey was the CEO who took the decision to ban Trump, he expressed that he regretted that move. ” I do agree,” Dorsey tweeted, agreeing with Musk that it was a foolish decision to ban the Former President.

“There are exceptions (CSE, illegal behaviour, spam or network manipulation, etc), but generally permanent bans are a failure of ours and don’t work, which I wrote about here after the event (and called for a resilient social media protocol),” Said Dorsey. The co-founder further added that banning Trump was not something he feels proud about but he believes it was the right decision for Twitter at the time. “I believe this was the right decision for Twitter. We faced an extraordinary and untenable circumstance, forcing us to focus all of our actions on public safety. Offline harm as a result of online speech is demonstrably real, and what drives our policy and enforcement above all,” says Dorsey.

Why was Former President Donald Trump banned from Twitter?

Former President Trump was banned from Twitter on an alleged charge of incitement of violence that went against Twitter’s ‘Objection to Glorification of Violence’ policy. Trump had allegedly used his Twitter account to encourage the people who stormed the U.S. Capitol on 6th January 2021. His account was permanently banned after a pro-Trump mob stormed the Capitol building. Before the company permanently banned Trump’s Twitter account, Twitter had previously temporarily suspended Trump’s tweets for violating its policies on civic integrity and violence. The company claims to say that they had warned the former President that if he kept violating their policies they would be forced to ban him. After his permanent ban, Trump later launched his own social media platform called ‘Truth Social.’

On 14th April 2022, Tesla Motors CEO had offered to buy Twitter for $44 Billion. Musk is expected to serve as the temporary CEO in the months after all the necessary formalities for the takeover are done. Tesla’s stock sank by more than $125 billion the next day, because of this large dip in the stock, Elon Musk lost approximately $30 billion of his net worth. According to Musk, the social media platform needs to undergo a lot of changes.

It has been alledged that the Tesla Motors CEO sold 9.6 million shares worth $8.4 billion to fund the Twitter deal. On 25th April, the board was directors accepted Musk’s offer of $54.20 per share or $44 billion for the whole company. Musk started accumulating shares of Twitter in January, and later in April revealed that he had already accumulated a 9% stake in the company, making him the biggest individual shareholder in the company. Musk wants Twitter to be a platform that practices free speech. Musk is inclined to shape the company and the application as he pleases. He also intends to reinstate Trump’s Twitter account which was banned in January 2021.

The path forward for Elon Musk after acquiring Twitter

Musks says that he intends to reinstate Donald Trump’s Twitter account after he has acquired Twitter. “I do think that it was not correct to ban Donald Trump. I think that was a mistake because it alienated a large part of the country and did not ultimately result in Donald Trump not having a voice. He further added that it was morally wrong and flat-out stupid” Musk said. Elon Musk has said he wants to buy Twitter to encourage more free speech and went on to say that he thinks the platform should only ban accounts in rare cases to remove bots, spammers and scammers “where there’s just no legitimacy to the account at all. Otherwise, permanent bans undermine trust.” Musk said.

“I am not going back to Twitter. I am going to stay on Truth. I hope Elon buys Twitter because he’ll make improvements to it and he is a good man, but I am going to be staying on Truth” Trump said in an interview last month.