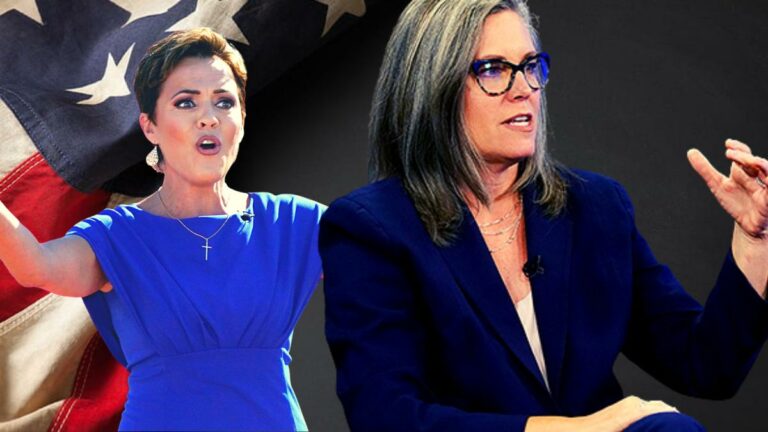 Republican Governor of Arizona Doug Ducey congratulated Democratic nominee Katie Hobbs on her victory to succeed him on Wednesday, after Republican nominee Kari Lake refused to concede the race.

Hobbs was announced as the winner of the high-profile gubernatorial race last week. Governor Ducey met with her on to offer his full support for the transition even as GOP allegations of voter disenfranchisement continue to make the rounds.

“Today I congratulated Governor-elect Katie Hobbs on her victory in a hard-fought race and offered my full cooperation as she prepares to assume the leadership of the State of Arizona,” said the Arizona Governor in a statement.

“My administration will work to make this transition as smooth and seamless as possible,” he added. “Our duty is to ensure that Arizona’s 24th Governor and her team can hit the ground running and continue our state’s incredible momentum.”

Governor Ducey further went on to say that everybody took the success of Arizona into account while casting ballots, thus it does not matter “who we voted for.”

More than a week after her victory was declared and days after the last ballots were counted, Ducey met with Hobbs in his office.

Ducey was a co-chairman of the Republican Governors Association, which spent more than $10 million on television ads criticizing Hobbs, but he was not a big fan of Lake. He backed her opponent in the GOP primary, and despite endorsing the entire GOP ticket in the general election, he did not campaign with Kari Lake.

Hobbs, the current secretary of state, has formed a transition team that is vetting potential staff and preparing her to become the first Democrat to hold the state’s top office since Janet Napolitano stepped down after the 2008 election to become U.S. Homeland Security secretary.

Hobbs’ opponent Kari Lake, on the other hand, has not yet conceded and has attempted since the election to draw attention to voters who claim to have been affected by a problem with ballot printers at some Maricopa County polling places.

Despite Hobbs leading her by about 17,000 votes, a margin that triggers an automatic recount, Republican Senate nominee Kari Lake, who received former President Trump’s endorsement, has refused to concede the race. Several times before the election, the Arizona Republican refused to say whether she would accept the results of the race.

In the two-and-a-half-minute video, the Republican candidate for Arizona Governor focused on the long lines at the polls on election day and falsely claimed that “tens of thousands” of voters in Maricopa County had been disenfranchised. She proposed going to court, claiming to have put together the “best and brightest” legal team.

“I am busy here collecting evidence and data. Rest assured, I have assembled the best and brightest legal team, and we are exploring every avenue to correct the many wrongs that have been done this past week. I’m doing everything in my power to right these wrongs,” Lake said in a short video posted to her Twitter account.

Former President Donald Trump too appears to support Kari Lake’s claims of fraud in the Arizona elections, and has called to “redo” the process all over again.

“This Election was a disgrace, everything was geared by Republicans toward Election Day and then, when it finally came around, the Republican machines were systematically broken. They should at minimum redo the Arizona Election,” read a statement from the former President.

Katie Hobbs lashes out at Kari Lake in interview