The Russia-Ukraine war has been raging for the past 22 days now, and the world is still waiting for Joe Biden to come up with an idea to stop Putin. Former President Donald Trump has been quick to comment several times that Putin wouldn’t have dared to invade Ukraine, was he the one in the office, and a large majority of swing voters, Trump/Biden voters seem to follow suit with that belief.

“As everyone understands, this horrific disaster would never have happened if our election was not rigged and if I was the president” -said Trump.

Poll data and facts seem to agree with Trump

This claim that Donald Trump has made, literally over a hundred times, isn’t exactly hypothetical, considering the data from recent polls which indicate that a vast majority of Americans believe exactly that. As per an excerpt from The Hill, a new Harvard Center for American Political Studies (CAPS)-Harris Poll survey released Friday found that 62 per cent of those polled believed Putin would not be moving against Ukraine if Trump had been president. When looking strictly at the answers of Democrats and Republicans, 85 per cent of Republicans and 38 per cent of Democrats answered this way.

To stir the pot further, let’s take a look at some facts, shall we?

Putin didn’t invade any country while Trump was in power. However, he did annexe Crimea while Barack Obama held office.

Under Trump’s administration, ISIS went from a major threat during the Obama years to almost non-existent. The ISIS “caliphate” was brought down in Syria and Iraq, and attacks on Westerners came to a halt. Even North Korea appeared surprisingly well-behaving while Trump held power, and went from threatening to wipe out the US and carrying out regular missile tests in neighbouring countries, to shutting down all these actions for over 18 months.

The first step to stopping the war would be to hit Putin where it really hurts- by putting America’s energy sector back on its feet and stopping depending on Russian resources. Sanctioning the Nord Stream 2 pipeline didn’t really help much.

A recent HarrisX poll asked, “In light of Russia’s attack on Ukraine and soaring gasoline prices, should the Biden administration ease its focus on climate change and allow more oil and natural gas exploration in the U.S. or not?”, to which 69% of the respondents, including Democrats, said ” yes”. 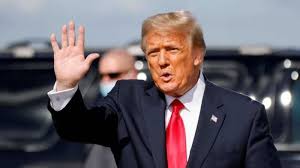 But President Biden isn’t budging. He suspended drilling leases in the Arctic National Wildlife Refuge and also shut down the Keystone pipeline as soon as he took office.

Of course, none of this hypothetical brainstorming on who to blame the war on is going to help the brave Ukrainians with saving their lives, freedom or dignity. The need of the hour is not to argue or hold discussions about why or who, but to actually take action and bring an end to the suffering of innocent lives in Ukraine.