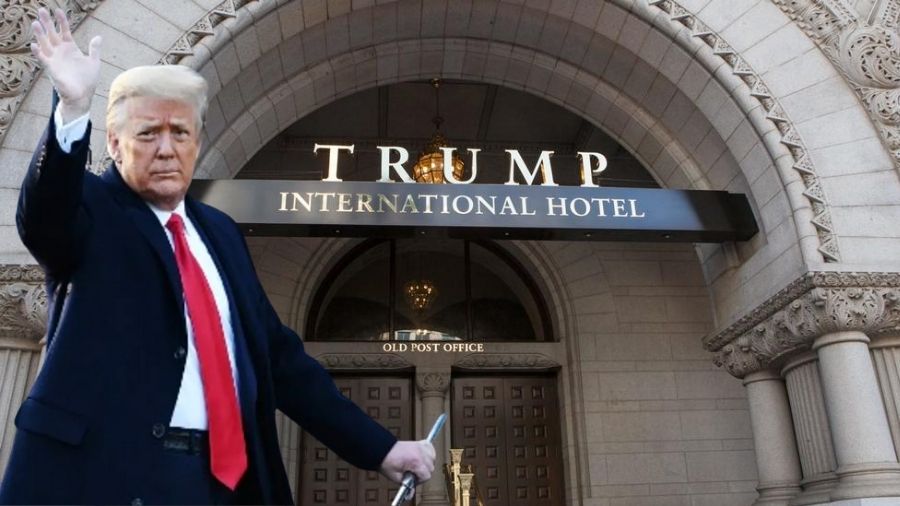 The lease to the Trump family’s Washington, D.C. hotel, which served as a symbol of his authority to GOP politicians who assembled there and of corrupt practices to his critics, has been sold to a Miami-based investor fund.

The Trump Organisation announced on Wednesday that it had finished the sale of a long contract of the Trump International Hotel to CGI Merchant Group of Miami for a record per-room price in the city.

According to sources close to the deal who requested anonymity to explain the private transaction, the price was $375 million, giving the Trump family business a profit of up to $100 million.

The hotel will be renamed Waldorf Astoria after the new owners eliminate the Trump name from the facade. Former Yankee slugger Alexander Rodriguez is among the group of investors, according to the Associated Press.

Many hotel brokers, owners, and consultants were surprised by the high price paid for the 263-room hotel across the street from the White House. During Trump’s four years in office, the hotel lost more than $70 million, including each year before the pandemic shutdowns.

Read on as we examine some of Donald Trump’s and his organisation’s worst past business moves, from lending his name to a variety of flop products to failing businesses. All figures are in US dollars.

Democratic lawmakers have questioned the high price, which is more than $1.4 million per room. CGI was asked to provide documents listing all of its investors by the US House Oversight Committee earlier this month.

Lobbyists, diplomats, and others seeking to curry favour with the president flocked to the hotel. Democrats claimed it tainted the president’s reputation, pitted his financial interests against the public good, and possibly broke the law.

Several legal challenges to his ownership have failed. The hotel is housed in the former Old Post Office building, which is still owned by the government. The Trump Organisation was granted permission to renovate the building and operate it as a hotel in exchange for paying the govt annual rent and foregoing profit.

The hotel was a magnet for Trump officials and supporters

The former president’s hotel, the Trump International Hotel in Washington, D.C., had its signage removed Wednesday night in preparation for its transformation into a Waldorf Astoria later this year. Former President Donald Trump’s Washington hotel first opened its doors in September 2016, just weeks before he won the election in November.

In 2013, his company agreed to a 60-year lease with the government for the property. The hotel, which is located on Pennsylvania Avenue, was a magnet for Trump officials and supporters before it even opened. Chef José Andrés backed out of plans to open a restaurant in the hotel in 2015, citing Trump’s anti-Mexican remarks.

The hotel received more than $3.7 million from foreign governments

Trump was accused of billing lobbyists and foreign governments who wanted to curry favour with his administration at the hotel. According to the House Oversight Committee, the venue received more than $3.7 million from foreign governments between 2017 and 2020 and hosted events for groups with ties to Saudi Arabia, Bahrain, and Kuwait.

According to a report by Citizens for Ethical Government, or CREW, a government watchdog group that covered Trump, public officials visited the hotel 973 times while he was president, more than any other Trump company property. CREW president Noah Bookbinder said in a statement last year that Trump should have never been allowed to keep his D.C. hotel as president.

“He should have sold it, along with the rest of his holdings, before taking office.” Instead, he used it for political corruption and constitutional violations for four years.” The hotel has been cleared out this spring in preparation for a summer reopening under the Hilton banner. BLT Prime, Trump’s only meal as president (according to Washingtonian, his order was shrimp cocktail, fries, and a well-done steak with ketchup), closed in April.

What did Carolyn Maloney say about this?

Rep. Carolyn Maloney, D-N.Y., chair of the House Oversight Committee, said in a statement Wednesday that the hotel’s sale was “the latest in a long line of questionable deals, conflicts of interest, and constitutional violations involving former President Trump and his Washington, D.C., hotel.”

“The former president will profit tens of millions of dollars by selling his lease at a significant premium over market rates, but the American public has no idea who is paying for this deal,” Maloney said. The hotel’s lease was purchased by CGI Merchant Group, an investment management firm that announced its partnership with Hilton on Wednesday. The former Trump hotel, known as the Old Post Office Building, was once Washington’s post office and is the second tallest structure in the city, after the Washington Monument.