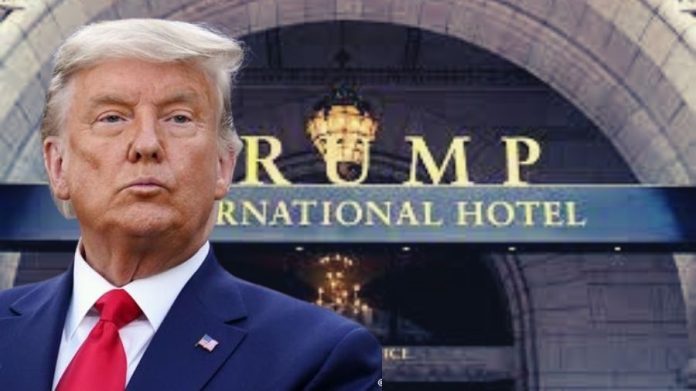 The signs atop the ‘crown jewel’ of former president Donald Trump’s real estate empire, The Trump International Hotel in Washington were torn down just hours after control over the property was passed on to the new owners, the CGI Merchant Group.

The CGI Merchant Group which includes former MLB superstar Alex Rodriguez and former boxing champ Floyd Mayweather, struck a deal for $375 million last year to buy the hotel. The deal was closed on Wednesday, with the signs coming down shortly after.

While Trump was in office, the hotel suffered $70 million in losses, but according to the Washington Post, this deal with the CGI Merchant Group will yield a profit of $100 million for the former president.

While the federal government owns the building, Trump won a lease on it in 2012 and opened it as a hotel in 2016. After he was elected president, it became a destination for those looking to be seen and gain favour in his eyes.

The hotel has also been a centre of attraction for ethics allegations, as Lobbyists and foreign interests spent a lot of money at the hotel, which earned Trump and his family millions of dollars.

But business soon dried up, when Trump left office. Kevin Chaffee, senior editor of Washington Life said “Those people no longer have any reason to meet and try to find out what’s happening on the scene because the man is gone. So it must be like a ghost town.”

Even during Trump’s presidency, the hotel struggled financially, with a congressional report released during that time revealing that it lost $70 million over four years. According to the Associated Press, the House Committee on Oversight and Reform, the Trump Organisation was forced to loan the hotel $27 million and seek preferential treatment in order to delay payments on a $170 million loan. The hotel was also the subject of a lawsuit in which Trump was accused of profiting financially from his presidency in violation of the Constitution. The Supreme Court eventually dismissed the suit, but Congress is still looking into the arrangements for potential conflicts of interest.

Noah Bookbinder, president of Citizens for Responsibility and Ethics in Washington, told a news outlet that the ex-president should have been forced to leave the property before he assumed office as President. But instead, Trump “rode out four years of using it for influence peddling and constitutional violations.”

“Selling it now that he’s out of the office and the grift dried up is, to say the least, too little, too late,” -Noah added.

With the signs torn down from the hotel on Wednesday, critics of the former president took to social media to bid it a ‘fond’ farewell.

“The Trump Hotel in DC is no more. Good riddance to a sinkhole of corruption.” -tweeted the Citizens for Ethics.

“The Trump Hotel in Washington DC is no longer. There should be a historical marker placed nearby as to all the crimes that were committed inside.” -tweeted another, while another Tweet read, “AMEN! Buh-Bye to the #TrumpHotel in #DC! Its signs are taken down! I will now happily walk inside! I’ve loved the Old Post Office Pavilion since I was a kid, but wouldn’t step foot inside once Trump got his hands on it, as I wasn’t about to give him a dime of my $$.”

One Twitter user said that the property needs an insane amount of sage to purify it, while another asked, “Anyone want to suggest which political ghosts will linger in the soon-to-be-former Trump International Hotel DC?”