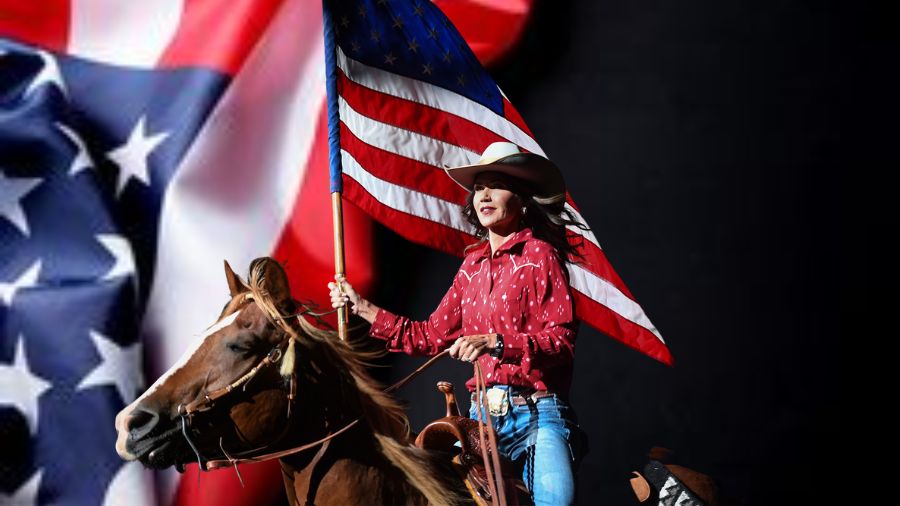 Incumbent Governor of South Dakota Kristi Noem has emerged victorious in the GOP state primary election. Noem defeated Steve Haugaard, the former Speaker of the state House in a landslide victory with a total of 76.4% of the votes.

Trump’s ally, Kristi Noem, wins in South Dakota –“We’re pushing back on Joe Biden’s America and what he’s doing to this country”

At an election watch party in Sioux Falls Noem said “And now, with your support, we’re going to have the chance to go to a November election and make sure that we’re pushing back on Joe Biden’s America and what he’s doing to this country.”

Since the pandemic, Noem’s hands-off approach to COVID-19 has increased her national profile and state approval. She is a close ally of former President Donald Trump and is known for her conservative views on guns, abortion, taxes, and other social issues. She even hosted a 4th of July fireworks show with him at Mount Rushmore in 2020, and she received his endorsement for governor earlier this year. Noem expressed gratitude for being nominated again.

“We’ve got an incumbent governor who is extremely popular within her own party,” says Jon Schaff, a political science professor at Northern State University in Aberdeen, S.D.

Her belief in the race was evident throughout the campaign. During the primary, she barely engaged Haugaard; the two candidates never debated. In addition, she outraised and outspent her opponent.

Nonetheless, Haugaard stated that he believed he saw an opening in the race. Noem narrowly defeated Republican Marty Jackley in the 2018 governor’s race. In the general election, she received 51% of the vote to Democrat Bille Sutton’s 48%. Republican voters overwhelmingly nominated her for the general election on Tuesday. Noem will then face off against House Minority Leader Jamie Smith, a Democrat from Sioux Falls. Tracey Quint, a libertarian, is also running for governor.

This week has brought the Republicans some more major wins in addition to Noem’s victory. Democratic District Attorney Chesa Boudin, known for his highly contentious tenure in San Francisco over crime and homelessness, has been successfully recalled. On Wednesday, some ballots were still being counted. However, an overwhelming majority of the more than 123,000 voters who voted in the recall election wanted Boudin removed from office.

But on the other hand, former President Donald Trump’s adversary incumbent John Thune also handily won his primary in the Senate race. Thune, the majority whip, is widely regarded as the next in line to succeed U.S. Sen. Mitch McConnell as Senate Majority Leader. Twenty minutes after the polls closed, Thune’s race was called.

Thune has been in the former President’s bad books since he refused to support him in the effort to overturn the results of the 2020 Presidential election that resulted in Joe Biden’s victory. Thune said during Trump’s attempt to overturn the 2020 election results that the efforts were “going down like a shot dog.”

In response to Thune’s remark, the former president took to Twitter to respond.  “RINO John Thune, ‘Mitch’s boy’, should just let it play out. South Dakota doesn’t like weakness. He will be primaried in 2022, political career over!!” -he wrote in a post.