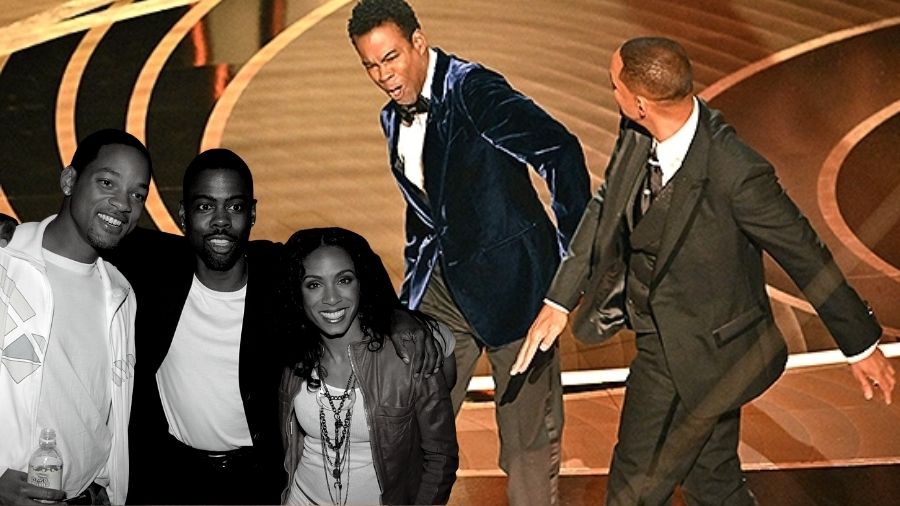 Amidst the recent controversy, it has emerged that Chris Rock had once vowed to never poke fun at Jada and Will. It has also been revealed that Chris’s relationship with Jada and Will had a lot more complexities than people realized. We will get to all of this and more in this article.

Hollywood’s reaction to the incident

Jaden Smith, Will Smith’s 23-year-old son, also reacted to the event. He posted a tweet in favour of his father’s actions, saying, “And That’s How We Do It.”

Judd Apatow has now removed a tweet in which he suggested Smith “could have killed” rock onstage.

According to Insider, the actor stated in a tweet Sunday night, “That’s pure out of control rage and violence,” “In the previous three decades, they’ve heard a million jokes about them. In the worlds of Hollywood and comedy, they are not novices. He lost his mind.” Apatow said on a Monday broadcast of SiriusXM’s Pop Culture Spotlight that he doesn’t “mind taking tweets down,” and doesn’t “need people debating my stupid impulsive comments for the rest of my life.”

Apatow also claimed that he hadn’t seen the incident “in the context of the show,” misinterpreting Rock’s joke as implying that Pinkett Smith was a “badass” in the same way that Demi Moore’s G.I. Jane was. He said there might have been “more levels to it that I don’t understand.” according to presenter Jessica Shaw. He termed the incident a “sad moment” and said it “might make someone a little quicker to jump up on the stage at a comedy club somewhere.” in another interview footage released Monday. On Monday morning, Nicki Minaj posted a barrage of tweets in support of Smith. “I love Chris Rock,” the rapper tweeted in the first of several tweets. “I don’t think he would’ve made that joke had he known what Jada recently shared- but between him & the whole team @ the #Oscars you mean to tell me not One of y’all heard this woman just share this heartbreaking story? #ComeOnSon…”

“You just got to witness in real-time what happens in a man’s soul when he looks over to the woman he loves & sees her holding back tears from a ‘little joke’ at her expense,” Minaj continued. “This is what any & every real man feels in that instant. while y’all seeing the joke he’s seeing her pain.”

In subsequent tweets regarding the event, Minaj expressed compassion for Pinkett Smith’s hair loss and said that social media has made people believe that men having a “front-row seat” to their wives’ suffering wouldn’t show up in real life.

Jamella Jamil, star of “The Good Place” tweeted her support for Smith’s actions, along with a photo of a Malcolm X quotation. “Will Smith said ‘Not Today.’ A man big enough to absolutely floor him slapped him softly enough that Chris barely moved because he made fun of his wife’s alopecia on a world stage,” Jamil tweeted several hours after the Oscars ended. “Don’t say #protectBlackwomen for two years and then only condemn Will here. Come on…”

In a Sunday night tweet, comedian Kathy Griffin expressed her disgust at Smith’s conduct, “Let me tell you something, it’s a very bad practice to walk up on stage and physically assault a Comedian,” Griffin wrote. “Now we all have to worry about who wants to be the next Will Smith in comedy clubs and theatres.” Liam Payne also commented on this event, saying, “I believe whatever he felt that he did, he had the right to do,” Payne said.

“I also felt there were three losers in one fight,” he continued. “He didn’t know, being Chris Rock, he didn’t want to do what he had to do, being Will Smith, and she did nothing, being Jada.”

Smith’s acceptance speech for best actor was a “powerful moment,” according to Payne, who called Smith “one of the world’s best emoters.” Richard Williams, the father of Venus and Serena Williams, whom Smith played in his Oscar-winning performance, was a “fierce protector of his family.” Smith said at the start of his statement. Smith also sobbed and expressed regret to the Academy of Motion Picture Arts and Sciences as well as his fellow candidates. “I had to leave my chair, I’ll be honest with you, it cut me really deep,” Payne said.

John Leguizamo had one of the best responses. According to Entertainment Tonight, Leguizamo first mistook the scene for a farce until he understood there was a “punch not a punchline.” He also stated that he would have preferred Smith to apologize to Rock more personally.

“I thought Will’s performance was amazing and I’m sorry that he tarnished it with this behavior,” Leguizamo told ET. “I mean, we all, nobody likes to be made fun of but you gotta have a sense of humor about yourself. Can’t take yourself that seriously. I mean, we’re just acting, you know, let’s just relax.”

“Y’all gave Supreme Court Judge Nominee Ketanji Brown Jackson a lot of love for showing restraint last week and she deserved that, but can we please drop one of the Clue’s bombs for Chris Rock?” Charlamagne Tha God said. “Cause not only did he show restraint, he kept the show moving, he had commentary after that incident happened, he’s never stopped being Chris Rock, he never stopped being a professional,” the host continued. “I respect his restraint because that could have went a whole different way, and he did that just to get to that moment for Questlove.”

After hitting Smith, Rock went on to present the prize for the best documentary feature to Ahmir “Summer of Soul,” Thompson’s “Questlove” a film about the 1969 Harlem Cultural Festival.

Charlamagne also slammed those who dubbed the 2022 Oscars the “blackest Oscars ever,” stating he doesn’t appreciate individuals who “acting like violence and ignorance is Blackness.” Smith, he added, “stepped on his own moment.”

Stern spoke about the incident on his SiriusXM show on Monday, Page Six reported.

“This is a sign of great mental illness when you can’t control your impulse,” Stern reportedly said. “Not only that, it was hardly an insulting joke. It was not even a good joke.”

“You don’t provide security?” Stern said on the show, according to The Hollywood Reporter. “You don’t have someone come up there? Chris Rock was just trying to make people laugh at the fucking ceremony, which was so long and boring.”

Jason Momoa told People at the 2022 Vanity Fair Oscars Party that he was “pretty shocked” by the event.”You never know where people are at, you know? There’s a tipping point for everyone, right? I’ve had my places,” Momoa told People.

“He can ask for forgiveness. Sometimes you’re just sensitive. We’re all sensitive. I’m not walking in his shoes, [but] I’ve definitely been in places like that.” “It’s just people, we’re under a microscope,” Momoa continued. “I don’t know what really it was for him, but he’s an amazing human being. Both of them. And they’ll work it out.”

Sophia Bush, an actress, took to Twitter to denounce Smith’s conduct as well as Rock’s initial joke. “Violence isn’t ok. Assault is never the answer,” she wrote. “Also? This is the 2nd time that Chris has made fun of Jada on the #Oscars stage, & tonight he went after her alopecia. Punching down at someone’s auto-immune disease is wrong. Doing so on purpose is cruel. They both need a breather.”

Chris Rock once vowed not to pick at Jada

Amidst the recent controversy, it has emerged that Chris Rock had once vowed to never poke fun at Jada and Will. It has also been revealed that Chris’s relationship with Jada and Will had a lot more complexities than people realized. The 57-year-old comedian also featured in a 1996 episode of The Fresh Prince Of Bel-Air with Will, 53, and quipped years later that The Matrix star hadn’t even gotten her own invite to the Academy Awards, which he was presenting in 2016. Chris and Jada looked to be close friends only a few years before the embarrassing dig when they travelled the world together for press junkets, movie premieres, and red carpet appearances to promote three Madagascar flicks between 2005 and 2012.

The public altercation at the Oscars appears to have wrecked hopes for a fourth episode, which was supposed to be published in 2018 before being postponed.

In the cartoon franchise, Chris voiced Marty the Zebra and Jada played Gloria the Hippo, and while they didn’t appear together on-screen, they definitely put up nice shows when promoting their films. Will also appeared at the 2005 Nickelodeon Kids’ Choice Awards, when the two presented the award for Favorite Voice From An Animated Movie. The Grown Ups actor commended Will and Jada’s daughter Willow’s 2011 hit, 21st Century Girl, during the marketing tour for Europe’s Most Wanted.

‘Hey, my kids listen to your kids!’ he informed the pair, according to Fuse. In his NBC sitcom, the former SNL star collaborated with the Gettin’ Jiggy Wit It hitmaker for the first time in the preceding decade.

He made cameo appearances as a fake comic named Maurice Perry and his sister Jasmine, who had a date with Will soon after. Chris’ bond with the power couple was so strong that he once stated that his off-the-cuff remarks about Will, Barack Obama, and Brad Pitt would never be directed at them. ‘(Obama’s) just one of those guys, you know, like Will Smith,’ he said on CNN in 2009. There are no Will Smith jokes in this film. There are no jokes about Brad Pitt.