In a rather controversial move, Tiffany Haddish defends Will Smith for slapping Chris Rock. This is when all of the internet seems to be filled with people cheering for Chris Rock and bashing Will Smith. “It was the most beautiful thing I’ve ever seen,” she said. She was referring to how she thought about Smith standing up for his wife. She also states that seeing a “black man” standing up for his wife meant “so much” to her. We will see how people and other celebrities react to this claim and more in the article below.

If by some miracle, you haven’t heard of Will Smith slapping Chris Rock at the Oscars, then, that is exactly what it is. However, why did Will Smith feel so inclined to get this aggressive on camera? Trust me, I am not one for celebrity gossip, but this situation is a little infuriating or ingratiating, depending on whose side you’re on.

What happened was that Chris Rock made a joke about Jada Smith’s (Will’s Wife) bald head, which was caused by alopecia. “I love you, Jada, G.I Jane 2, can’t wait to see it.” Will Smith was first seen laughing but Jada came across to be extremely uncomfortable with the joke. This is when Will Smith calmly walked on stage and slapped Chris Rock, with (I must say) an amazing technique and even better footwork. 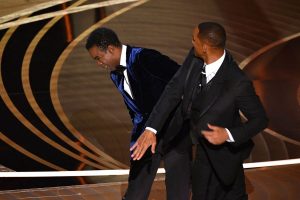 The sound of the slap reverberated throughout Dolby Theatre and Chris Rock was visibly shocked, “Wow!” he exclaimed. Then, Will Smith, who walked back and took his seat among the stunned crowd, went on to say (Extremely Aggressively) “Keep my Wife’s name out of your f**king mouth,” to which, a visibly shocked and hurt Chris replied, “I’m going to.”

Alright, I’ll admit the joke was pretty bad. Every single respectable and great comedian always knows it’s better to punch up not down. However, I did find a clip of Will Smith also making a joke about baldness. Remember that Will’s rise to fame also came through rather insensitive jokes. This clip is from 1991 when Will made a joke about a jazz player who was bald. “He has rules, he follows the rules, he has to wax his head every morning, he follows the rules.” When the jazz player seemed uncomfortable, Will said, “Aw, come on, these are jokes.”

Also read| Will Smith dubbed a hypocrite after resurfaced video shows him mocking a bald man.

I totally side with Chris Rock in this situation, the way he calmly handled the situation and didn’t fight back Will showed an incredible display of self-control. Also, violence is not the answer to any situation, if you don’t like a joke, you don’t just go and smack the comedian, unless you’re Will Smith or a self-absorbed idiot. The way Will handled the situation was incredibly childish but Chris’s handling was incredibly mature and calm. If anybody else was in the shoes of Chris Rock, they would’ve devolved into childish rage as well.

Other celebrities’ reactions to the incident

Stephen A. Smith’s reaction to the slap was poignant and to the point. “What Will Smith did tonight was straight bullsh*t. Props and congratulations to him for winning the Oscar, [be]cause damnit, he deserved it, and I love the brother and I’m proud of him, but boy was that a shameful act for him to commit tonight.” “No excuse for it ladies and gentlemen, don’t even try to justify it. I never dreamt in my wildest dreams that I’d be saying this about Will Smith.” 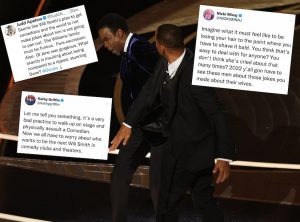 Tiffany Haddish’s reaction to the incident

In an extremely controversial move, Tiffany Haddish defended Will Smith for slapping Chris Rock when it seems like the entire internet is divided between people cheering for Chris Rock and bashing Will Smith.

Haddish rose to fame after guest-starring on many television shows before landing the role of Nekeisha Williams on the NBC sitcom The Carmichael Show (2015–2017). 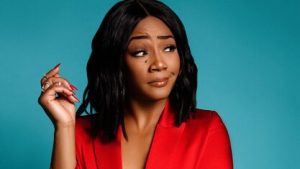 Her breakthrough came with a prominent part in the comedy film Girls Trip (2017), for which she received several plaudits, including two Critics’ Choice Award nominations. Haddish’s performance was named one of the finest cinema performances of the twenty-first century by The New Yorker in 2021. She earned a Primetime Emmy Award for hosting a Saturday Night Live episode in 2017 and wrote a novel, The Last Black Unicorn, about her experiences.

Haddish was born and raised in the Los Angeles neighbourhood of South Central. Tsihaye Reda Haddish, her father, was of Ethiopian Jewish ancestry and was a refugee from Eritrea. Her mother, Leola, was an African-American woman who grew up in a Christian home and had a modest company. Haddish’s mother remarried after her father abandoned her when she was three years old, giving birth to Haddish’s two half-sisters and two half-brothers. 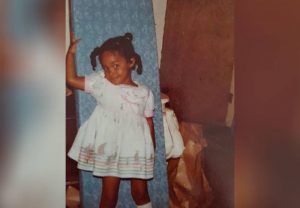 Haddish’s mother, Leola, was in a vehicle accident in 1988 while her family was residing in Colton, California. It was thought to be the source of Leola’s schizophrenia; Haddish claimed her mother became irritable, aggressive, and violent as a result. Haddish, who was nine years old at the time and the oldest of five siblings, took on the role of primary caregiver for the family. Haddish realized her ability for making people laugh about this time. She said, “I was less likely to be beaten if I could make [Leola] laugh and transform her rage into joy. Similarly, if I could make the students laugh at school, they’d help me with my studies and defend me from bullies.”

Her stepfather eventually admitted to Haddish that he tampered with the brakes on her mother’s automobile with the intent of killing Haddish, her siblings, and her mother in order to collect on their life insurance policies. The children, on the other hand, elected to stay at home that day, and her mother was not killed in the tragedy. 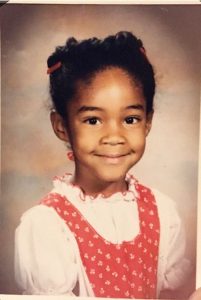 Haddish and her siblings were placed in foster care when she was 13 and were briefly separated from one another. She utilized humour to cope with being among strangers while she was there. She and her brothers were reunited with their grandma when she was 15 years old. She was hospitalized with toxic shock syndrome at a certain point in her life.

She went to Woodland Hills’ George Ellery Hale Middle School and graduated from Woodland Hills’ El Camino Real High School, where she was the school mascot. She admitted that she struggled with reading until high school, but that she improved after receiving assistance from a teacher. Despite her award-winning participation in theatre contests performing Shakespearean monologues, she got into a lot of problems at school. Haddish said in 2018 that she was raped by a police cadet when she was 17 years old, which she claims contributed to her aggression in repelling unwelcome attempts from males. Haddish was homeless after graduating from high school and spent time living in her car.