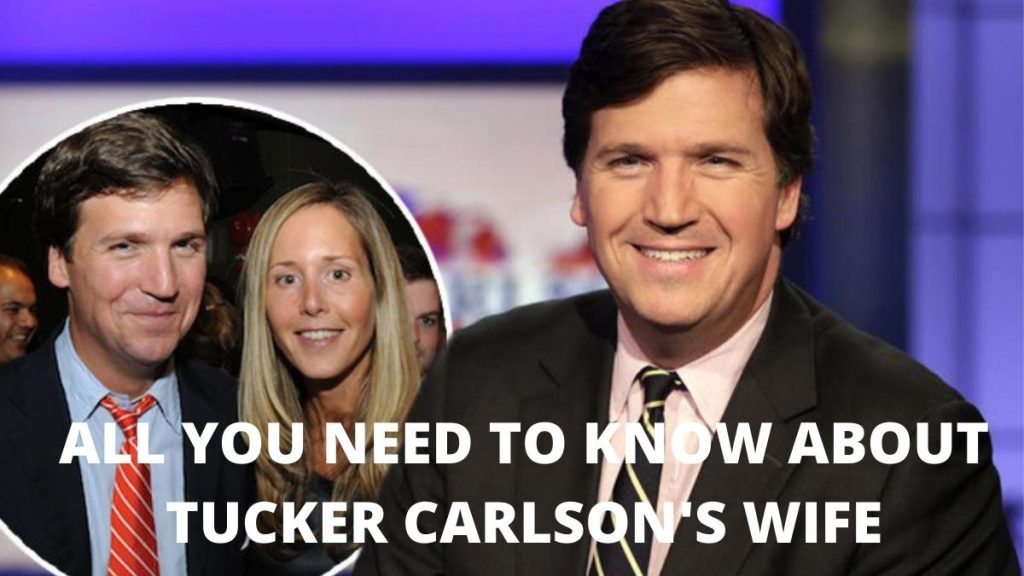 Tucker Carlson wife Susan has a cutest love story. When it comes to marriage, primetime TV host Tucker Carlson has a bit of advice for you. If she cries when she gets mad at you, she’s marriage material. If she yells? She’s not your girl! According to Carlson, early marriage and “having more kids than you can afford” is the best thing that you can do as the comfort they can provide you in your final hours on this earth is well worth all the effort you put into raising them.

Even though we know a little too much about his views on domestic life, what do we know about Tucker Carlson wife? Read on to find out!

Who is Tucker Carlson wife?

Tucker Carlson is married to Susan Andrews. The two tied the knot in 1991, and have happily shared their lives ever since.

Tucker Carlson and Susan Andrews have known each other since they were 15 years old in high school. Carlson has talked about his wife several times during events and interviews. He shares the first time they met during the first week of 10th grade, recalling Susan as the “cutest 10th grader in America,” who was also the headmaster’s daughter. (Carlson must have definitely had nerves of steel, dealing with that kind of pressure!)

Susan too fondly recalls 10th grade Tucker Carlson as an optimistic and cheerful young man in “khaki pants and a ribbon belt,” walking with a bounce in his steps. After completing high school, Tucker Carlson went off to Trinity College in Hartford, CT, when the two maintained a long distance relationship. Six months before completing graduation, Carlson gathered up quite a bit of courage, and in a “very 19th century move,” asked Susan’s father for her hand in marriage.

Following Susan’s father approving of the union, the two got married in 1991, and have been together for more than 30 years! In the three decades that they have been married, Tucker Carlson and his wife have built quite the life together. Even though Andrews does not have her own show, she has remained a pillar of support in his career throughout their long partnership.

While Susan Andrews may not be making headlines with her views and opinions like her husband Tucker Carlson, she hasn’t been idle, either.

Marriage to a public figure presents its own set of hurdles, which Andrews juggles alongside taking care of the couple’s four children: Hopie, Buckley, Dorothy, and Lillie. Hopie, according to a major news outlet, is the oldest, followed by Buckley, Lillie, and Dorothy.

For better or for worse…

Tucker Carlson wife, though not sharing the limelight with him, has stood firm by the conservative TV host through some of the most trying times of his life.

Andrews stood by and supported her husband after a woman named Kimberly Carter falsely accused Carlson of sexually harrasing her in the early 2000s. The accusations alone might have been enough to end Carlson’s marriage, but Carter later apologised and admitted that she was diagnosed with a mental health problem that made her believe her claims.

In 2018, the Carlsons were victims of a break-in, as they explained to a major news outlet. “ “I called my wife,” Carlson explained. “She had been in the kitchen alone getting ready to go to dinner and she heard pounding on the front door and screaming. Someone started throwing himself against the front door and actually cracked the front door.” Carlson further stated that, “It wasn’t a protest. It was a threat. They were threatening me and my family and telling me to leave my own neighbourhood in the city that I grew up in.”