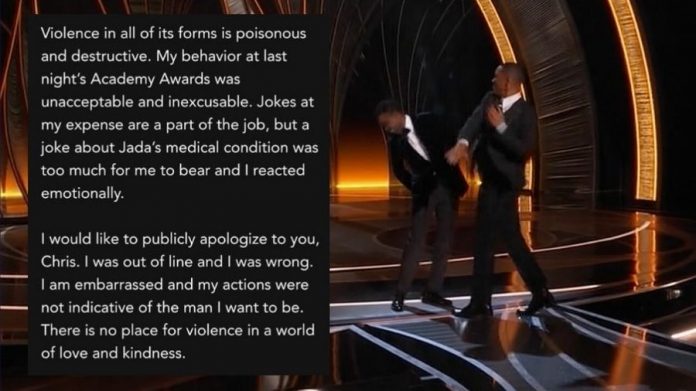 Rock for slapping him across the face on the Oscars stage Sunday night. The apology comes hours after the Academy of Motion Picture Arts and Sciences on Monday condemned Smith’s actions and launched an official inquiry into the incident.

The altercation between Smith and Rock happened after the comedian made a joke at the expense of Smith’s wife, Jada Pinkett Smith. When Rock took the stage to present the Oscar for best documentary feature, he directed his comedy to the couple. Rock said he was looking forward to seeing Pinkett Smith in G.I. Jane 2 — making fun of her shaved head. She has shaved her head because of the hair loss condition alopecia.

“Violence in all of its forms is poisonous and destructive. My behaviour at last night’s Academy Awards was unacceptable and inexcusable,” Smith wrote on Instagram. 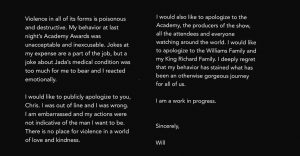 Smith wrote in his apology, “Jokes at my expense are a part of the job, but a joke about Jada’s medical condition was too much for me to bear and I reacted emotionally.” ”I would like to publicly apologize to you, Chris.  I was out of line and I was wrong.  I am embarrassed and my actions were not indicative of the man I want to be. There is no place for violence in a world of love and kindness”

In a statement Monday, the film academy said, “The Academy condemns the actions of Mr. Smith at last night’s show. We have officially started a formal review around the incident and will explore further action and consequences in accordance with our bylaws, standards of conduct and California law.”

Also read| Will Smith dubbed a hypocrite after a resurfaced video shows him mocking a bald man.

The fallout from Smith’s onstage assault continued Monday, as Hollywood and the public continued to wrestle with a moment that stunned the Dolby Theater crowd and viewers at home.

Chris declined to file a case against Smith

The episode upstaged the rest of the three-and-a-half-hour show and was sure to become one of the most infamous moments in 94 years of Academy Awards. It may cost Smith his sterling reputation in Hollywood, but not a criminal charge, at least for now, as Los Angeles police said Rock declined to file a police report. Chris didn’t feel like putting a file against the actor, Will smith.

Pinkett Smith looked visibly upset and rolled her eyes at the quip. The Red Table Talk host has been vocal about her struggles with alopecia – an inflammatory condition that causes excessive hair loss. Pinkett Smith has been public about the fact that she is living with alopecia and has been candid about it: “Me and this alopecia are going to be friends … period!” she wrote on Instagram last December.

Celebrities’ reactions to the incident

Some academy members, like writer-producer Marshall Herskovitz, called for the academy to take disciplinary action against Smith. “He disgraced our entire community tonight,” wrote Herskovitz on Twitter. Whoopi Goldberg, a member of the Academy’s board of governors, said Monday on ‘The View’, “We’re not going to take that Oscar from him. There will be consequences, I’m sure.”

“In a way, I feel bad for Will Smith, too, because I think he let his emotions get the better of him, and this should have been one of the great nights of his life,” said former Oscar host Jimmy Kimmel on Bill Simmons’ podcast. “And now it’s not. Was there anyone who didn’t like Will Smith an hour ago in the world? Like no one, right? Now he doesn’t have a single comedian friend — that’s for sure.”

Should Will Smith have been allowed to collect an Oscar after he slapped Chris Rock?

Some questioned whether Smith should have been allowed to continue to sit front and centre after smacking Rock. Several stars rushed to counsel and calm Smith, including Denzel Washington, Bradley Cooper and Tyler Perry. But the timing was also awkward because the best actor category was due up soon after, and Smith had long been considered a favourite to win the award.

How did people unrelated to Hollywood royalty react

“I know we’re all still processing, but the way casual violence was normalized tonight by a collective national audience will have consequences that we can’t even fathom in the moment,” wrote Janai Nelson, president and director-counsel of the NAACP Legal Defense Fund, on Twitter. “Maybe the world might not like how it went down, but for me, it was the most beautiful thing I’ve ever seen because it made me believe that there are still men out there that love and care about their women, their wives,” Haddish told People magazine.

Smith merrily took pictures and posted them on Instagram

Smith, meanwhile, merrily posed for photographs with his family outside the Vanity Fair party.

Inside, cell phone videos captured him dancing to “Gettin’ Jiggy Wit It” while clutching his Oscar. Their son Jaden tweeted: “And That’s How We Do It.” On Instagram, Smith posted: “Me ‘n Jada Pinkett Smith got all dressed up to choose chaos.”