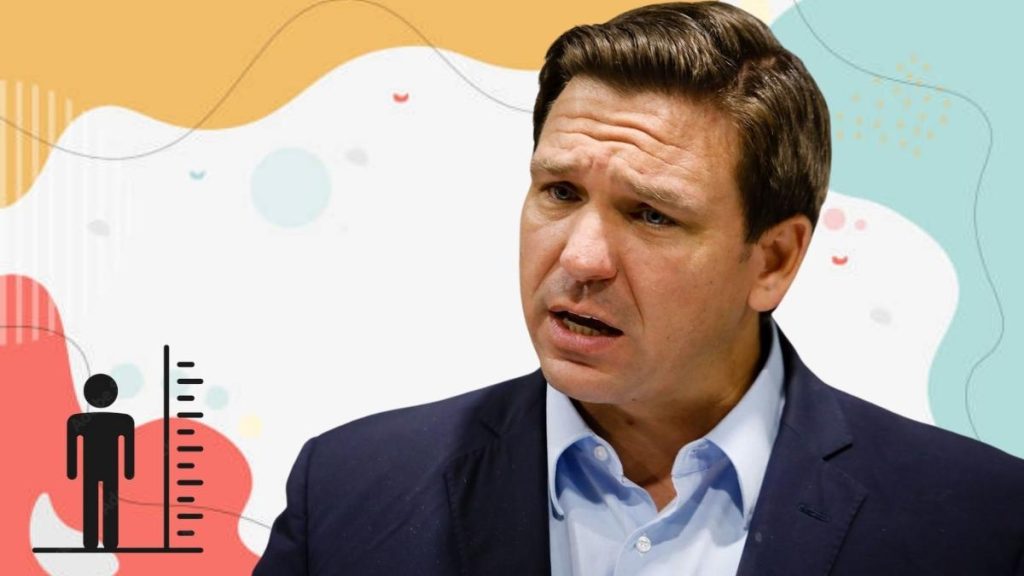 Ron DeSantis is a conservative Republican politician and the incumbent Governor of Florida. He represented the 6th Congressional district of Florida from 2013 to 2018 as a member of the Republican Party in the US House of Representatives. Read on to find out more including Florida Governor Ron DeSantis’ height.

Ron DeSantis height: How tall is the Florida Governor? Florida Governor Ron DeSantis stands at the height of 5’9, or 180 centimetres.

Ron DeSantis has been married to former TV host Casey Black since 2010, and has three kids, Madison, Mason, and Mamie. Casey has actively spearheaded several initiatives in the Republican Governor’s administration in Florida centred around mental health and substance abuse.

In a 2018 interview, Casey revealed how she met DeSantis while practising golf at a driving range. “I kept looking over my shoulder because I wanted the bucket of balls that somebody had left,” she said in the interview. “As I’m looking over behind me, Ron is over there. He thinks I’m looking at him. I was really looking at the balls. Long story short we started to talk and that’s how we met.”

Casey was recently diagnosed with breast cancer in 2021, which Ron DeSantis labelled as the “test of her life.” She was declared completely cancer-free as of March 2022. The Florida First Lady resumed her official duties a few months ago declaring she is “fit to fight”. “I’m feeling good, and I’m here, and I’m fit to fight, and that’s a lot due to your encouragement,” said Casey at an event.

The couple shared what life is like with their three kids, saying that it’s a challenging job making sure that the kids don’t destroy any of the “irreplaceable history of Florida” sitting in every nook and cranny of the Governor’s mansion.

“You go into the dining room, you see stuff from the USS Florida. You see the late 19th-century wallpaper, and I don’t think that orange crayon would look good on that,” shares Casey, with DeSantis adding, “We tried to baby-proof this place, but there are so many nooks and crannies, and they find all the nooks and crannies.” DeSantis was born on 14th September 1978 to Karen and Ronald Daniel DeSantis.

DeSantis’ mother worked as a nurse, and his father installed Nielsen television rating boxes. When he was six years old, his family moved to Orlando, Florida, before relocating to Dunedin, Florida. His sister Christina Marie DeSantis was born on May 5, 1985, in Orlando and died in 2015. He was a member of the Dunedin National Little League team that advanced to the 1991 Little League World Series in Williamsport, Pennsylvania. DeSantis was a student at Our Lady of Lourdes Catholic School and Dunedin High School, graduating in 1997.

In recent years, Florida Governor Ron DeSantis has emerged as one of the most popular GOP members after former President Donald Trump. DeSantis has made himself a national image as an avid opposer of coronavirus precautions and someone who doesn’t shy away from occasional clashes with culture. In recent months, the Florida Governor has signed several “cultural war” bills including the infamous ‘Don’t Say Gay’ bill, that bans the discussion of sexual identity in schools of Florida from kindergarten classrooms through Grade 3, citing that teaching kids that “they can be whatever they want to be” is “inappropriate.”

Ron DeSantis captures everything that an ideal MAGA candidate would have; a high-profile leader who embraces all the ultra-conservative aspects of the movement like opposing covid lockdown measures, attacking the ‘woke’ leftist culture and more recently, imposing the ban on abortion in Florida.

DeSantis’ campaign communication director Lindsey Curnutte says he is just what America needs after “Joe Biden’s destructive policies” have plagued the nation. “[His] Freedom Agenda has been the much-needed antidote for Joe Biden’s destructive policies — and he’s eager to support bold leaders who are fighting for freedom in their own states as November approaches.”- she says in a statement.

Indeed; DeSantis’ Trump-like stance without all the legal trouble is exactly what is needed. The Florida Governor resembles the former president even in his regular jibes. “Someone needs to grab that little elf and chuck him across the Potomac,” says DeSantis at a rally, referring to Joe Biden’s top medical advisor, Anthony Fauci.

The 46th Governor of Florida has served the United States Navy since 2004. As of 2022, he is still a member of the US Navy Reserve. Ron DeSantis has been honoured with several awards during his military career including the Bronze Star Medal, the Navy and Marine Corps Commendation Medal, the Iraq Campaign Medal and the Navy and the Global War on Terrorism Service Medal. DeSantis was commissioned as an officer in the United States Army during his second year at Harvard Law in 2004. Navy Judge Advocate General Corps (JAG). In 2005, he graduated from Naval Justice School. Later that year, he was assigned as a prosecutor to the JAG Trial Service Office Command South East at Naval Station Mayport, Florida. In 2006, he was promoted from lieutenant, junior grade to lieutenant. He worked directly with detainees at the Guantanamo Bay Joint Detention Facility for the commander of Joint Task Force-Guantanamo (JTF-GTMO).

DeSantis reported to the Naval Special Warfare Command Group in Coronado, California, in 2007, where he was assigned to SEAL Team One and deployed to Iraq with the troop surge as the Legal Advisor to the SEAL Commander, Special Operations Task Force-West in Fallujah.

DeSantis returned to the United States in April 2008, and was reassigned to the Naval Region Southeast Legal Service. He was appointed by the United States Department of Justice as a Special Assistant United States Attorney in the Middle District of Florida. DeSantis was assigned as a trial defence counsel until his honourable discharge from active duty in February 2010. He also accepted a reserve commission as a lieutenant in the Judge Advocate General’s Corps. Ron DeSantis made his political debut in 2012, when he announced his candidacy for the 6th Congressional District of Florida and won the six-way race with 39% of the vote. He was re-elected in 2014 and 2016.

Ron DeSantis announced his candidacy for the Governor of Florida in 2018 against the Republican incumbent Rick Scott. His campaign for Florida Governor heavily emphasised DeSantis’ support for former president Donald Trump, that included an ad where he was seen teaching his kids (one of them was dressed in a ‘Make America Great Again’ jumper) how to “build the wall.”

DeSantis was announced the winner of the race on November 17 and assumed office as the Governor of Florida on 8th January 2019.

The Florida Governor is now gearing up for the midterm elections where he will face Democrat challenger Charlie Crist.