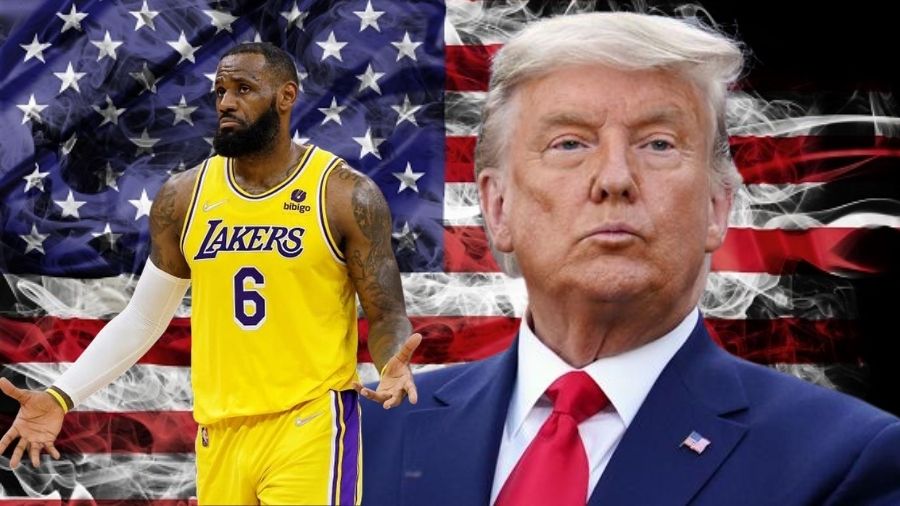 The former president has a long going one-sided feud with LeBron James since James did not support the Republican party but their opponents the Democrats. Since then he has not let go of any opportunity to ridicule the star. Even during the Save America Rally in Nebraska, the Former President made several attempts to ridicule the NBA star.

Initially, Trump had praised James when he won an NBA title with the Miami heat. However, when James began talking bad about the Former President and supporting their opponent in the 2020 presidential elections Trump kept the feud going.

James has paid no heed whatsoever to the Former President’s words. James feels that Trump’s statements towards him are very trivial and he prefers to give attention to the real social problems that need it. Plus he is trying to work on himself to get over the disappointing 2021-2022 NBA season.

During the Save America Rally in Nebraska, the former president did not leave a chance to ridicule the NBA star. While extending his support to a Republican Gubernation candidate, Trump spoke about transgender athletes. This is when he dragged the NBA star in.

The former President asked the LA Laker star if he would join his fictitious women’s basketball team. Trump further went on to ask him if he has ever considered becoming a woman.

“I’ll say this to LeBron James who I don’t like very much. I’ll say, ‘LeBron, did you ever have thoughts about going woman? Because if you did I’d love to have you on my basketball team,'” Trump said.

LeBron has won many basketball championships. He has won two Olympic gold medals, four NBA championships, four NBA MVP awards and many more awards. James started playing organized basketball when he was in fifth grade. He even played for the local basketball team called Amateur Athletic Union (AAU). The team enjoy success at a local and national level.

LeBron James’ professional career started when he was picked by his hometown team, Cleveland Cavaliers in 2003. LeBron set a new record for the pre-pro players. He scored 25 points against the Sacramento Kings setting a new NBA record. He was the first player in his team the Cleveland Cavaliers to receive the NBA rookie of the year award.

Lebron rose to stardom when he was named the NBA All-star Game Most Valuable Player. In 2018 LeBron James decided to opt-out of his contract with the Cleveland Cavaliers and later announced that he was joining the LA Lakers. One of the most famous teams in basketball. By 2019 – 2020 LeBron has already won Four NBA championships.