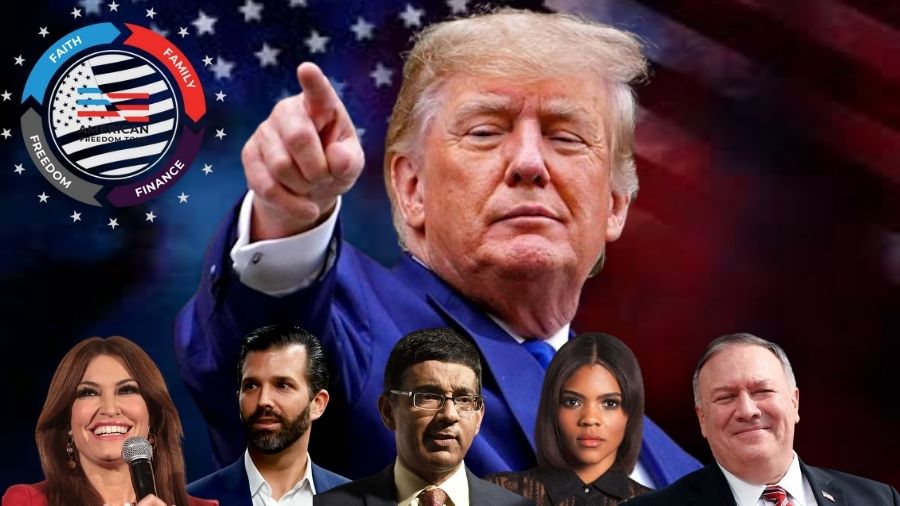 A national event series has been created for the first time to advance American ideals and values while also shaping opinion and culture on a local and national scale. The American Freedom Tour brings together patriots to celebrate rather than criticize America. The event is intended to foster vital connections and aid in the promotion of a conservative agenda while also protecting America’s future.

Along with former President Donald Trump, the American Freedom Tour will feature an impressive lineup of influential conservative speakers such as Candace Owens, Kimberly Guilfoyle, Mike Pompeo, Dinesh D’Souza, and Sheriff Mark Lamb, among others.

Candace Owens (born Candace Amber Owens Farmer) is a conservative politician, author, political commentator, talk-show host, and political activist from the United States. On April 29, 1989, the author, 32, was born in Stamford, Connecticut. Owens, unlike some politicians who avoid unnecessary controversy, is not afraid to speak her mind. Anti-vaccine Owens stated in a 2021 interview that “Trump only touted vaccines because he’s too old to know how to find alternative sources online.”

She has backed a number of other conspiracies, including former President Donald Trump’s election fraud plot, among others. If Trump wins the seat in 2024, Owens is being considered a potential Republican candidate for the upcoming Vice President elections.

Mike Pompeo (born December 30, 1963) is an American politician, diplomat, and businessman who served as Director of the Central Intelligence Agency (CIA) under President Donald Trump from 2017 to 2018 and as the 70th Secretary of State of the United States from 2018 to 2021.

Pompeo is a former officer in the United States Army. From 2011 to 2017, he represented Kansas’s 4th congressional district in the United States House of Representatives. He served on the Republican National Committee as a representative from Kansas. Pompeo is also a member of the Republican Party’s Tea Party movement. Once a critic of Donald Trump, whom he called an “authoritarian,” Pompeo became one of his staunchest supporters after Trump was elected Republican presidential nominee in 2016.

He created the viral documentary 2000 Mules, which provides solid evidence of voter fraud in the 2020 presidential elections. Dinesh D’Souza’s 2000 Mules has elicited numerous reactions from the conservative community, including one from former President Donald Trump himself.

Sheriff Mark Lamb was elected as the 24th Sheriff of Pinal County, Arizona, in 2017. He is a member of the right-wing.

Mark previously worked for the Salt River Pima–Maricopa Indian Community’s police department for six years. Mark Lamb has been confirmed as a speaker for the American Freedom Tour event on June 18th.

Kimberly Ann Guilfoyle is a former adviser to Donald Trump, the 45th President of the United States. She was also San Francisco’s First Lady during Gavin Newsom’s first two years as mayor.

She is also Donald Trump Jr’s fiancee. Kimberly Guilfoyle first became involved in politics in December 2016 when she was considered for the position of press secretary to then-President Donald Trump. Guilfoyle has since become one of Trump’s staunchest supporters. In addition, she was rumoured to be the chair of the Trump Victory Committee’s finance committee in 2020.

Tickets for the American Freedom Tour in Memphis are on sale now at the event’s official website. The ticket prices range from $9 to well over $4000. You can book your tickets here.

The Landers Center in Southaven, Memphis, is a cutting-edge 8,400-seat multi-purpose arena. There are games played by the Memphis Hustle of the NBA G League, a minor league basketball team affiliated with the Memphis Grizzlies.

The Landers Center has over 3,000 parking spaces. Parking for disabled guests is available at all entrances. You may park in any available/open lot if you are attending a sporting event, concert, or family event. If you are attending a Convention Hall event, please park on the building’s west side, near the Nissan entrance. For all arena events, parking is usually $5 cash.

The American Freedom Tour in Memphis will start in the early morning at 8:15 AM and will continue 5:00 PM CDT in the evening.