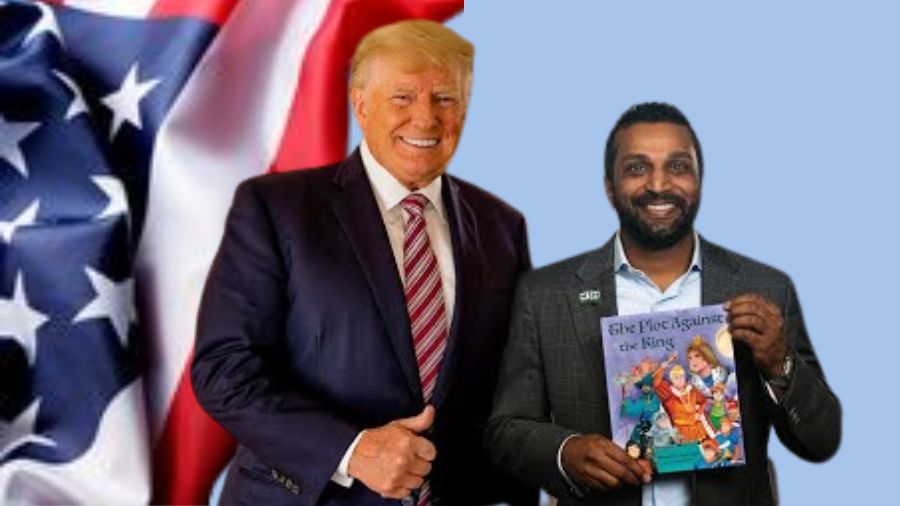 The Plot Against the King is a children’s book written by Trump aide Kash Patel and published by conservative publishers Brave Books publishing house. It was officially released on 1st April 2022. The storyline narrates the events of the Trump-Russia election scandal presented with a slight overlay of fairytales to make it palatable to children.

The plot of the book revolves around “Hillary Queenton’s” evil plot to accuse “King Donald” of conspiring with the “Russionians” to seize power. Mr Patel also appears as a “wizard” named ‘Kash, the Distinguished Discoverer’in the book, attempting to prove that “King Donald” was wrongfully accused. According to media outlets, the book is centred on the Steel Dossier story and subsequent allegations that Russian President Vladimir Putin aided Mr Trump’s campaign. The book implies that the dossier was written by “Hillary Queenton” in order to undermine Donald Trump’s claim.

“A key player in uncovering one of our nation’s biggest injustices tells the whole story—for kids! Kash Patel partners with Beacon of Freedom Publishing House, an imprint of BRAVE Books, to bring a fantastical retelling of Hillary’s horrible plot against Trump to the whole family. Full of fake heralds and keeper Komey’s spying slugs, this is a story of daring and danger. But never fear! Kash the Distinguished Discoverer will win the day.” -reads the official description of the book.

The “fantastic retelling of the true story” narrates the story of how “Hillary Queenton and her shifty knight had spread lies that King Donald had cheated to become King. They claimed he was working with the Russionians! But how could that be? Join Kash, the Distinguished Discoverer as he uncovers the plot against the King, and who was really behind all the lies.”

There’s more truth in Kash Patel’s Children’s book “The Plot Against The King” than in anything you read in rags like NYT and WaPo.

Support Kash & get your kiddos a copy of his book! https://t.co/R7Nli1aJB4

Our events are FULL of kids. I think we’ll be doing a reading soon! pic.twitter.com/1x1QTpeVSz

The Plot Against the King by Kash Patel is unfortunately unavailable for download. However, you can purchase the book, either at your local book store or online through Amazon and the official website of the publishing house, bravebooks.us. The book is available in three different formats in the market. The paperback version costs around $20 on Amazon, the hardcover version, $22, while the DVD format is priced around $24. A signed copy of the book is available on the official website of the publishing house which is priced at $59.

Here’s how you can purchase the book online:

The Plot Against the King book review

The book has been reviewed by several people, including former president Donald Trump himself. In a post on his social media platform Truth Social, he wrote, “The Plot Against the King is a true story about the Russia Collusion hoax written for children by my friend @Kash. Live the tale thru the eyes of great characters like the handsome King Donald and Kash the Wizard. This story showcases how Hillary Queenton and a Shifty Knight tried to destroy our democracy, but truth and the MAGA King prevailed…Order yours now…”

A parent wrote, “This book is AWESOME! Thank you to Kash Patel for caring enough about our children to make sure they have the TRUTH about these issues! I ordered this for my grandchildren because I refuse to let The history of this unprecedented time be lost.”

Another wrote, “A great non-fiction for kids to understand what really happened in American history. Illustrations come to life for those of us who survived this evil plot.”

“This is an awesome children’s book. It is very well written with beautiful illustrations with a captivating and ingenious storyline that is eerily parallel to the sneaky reality of what dishonestly happened to our own president.” -read another review.

In the days following the publication of The Plot Against the King, Google’s ad platform temporarily suspended the account of a conservative children’s book publisher. Later Tuesday, Google confirmed to Fox News Digital that the suspension had been lifted.

BRAVE Books, which has published children’s books defending the Second Amendment and warning against critical race theory, was notified Monday that its account had been suspended for violating Google’s “Circumventing Systems policy.” Google Ads did not provide any additional information about the specific violation.

Following the suspension, the former president wrote on Truth Social, “Kash Patel wrote the bestselling children’s book in the country, The Plot Against the King, which I recommended two weeks ago via Truth Social, telling our youth the Russiagate story. Google just banned his book’s entire ad campaign…”, to promote sales.

In a recent post on Truth Social, Donald Trump wrote that he wants the book in all schools in the United States to let kids know the actual truth. “Let’s put this amazing book in every school in America. Big tech should not get to suppress the truth,” -he wrote.