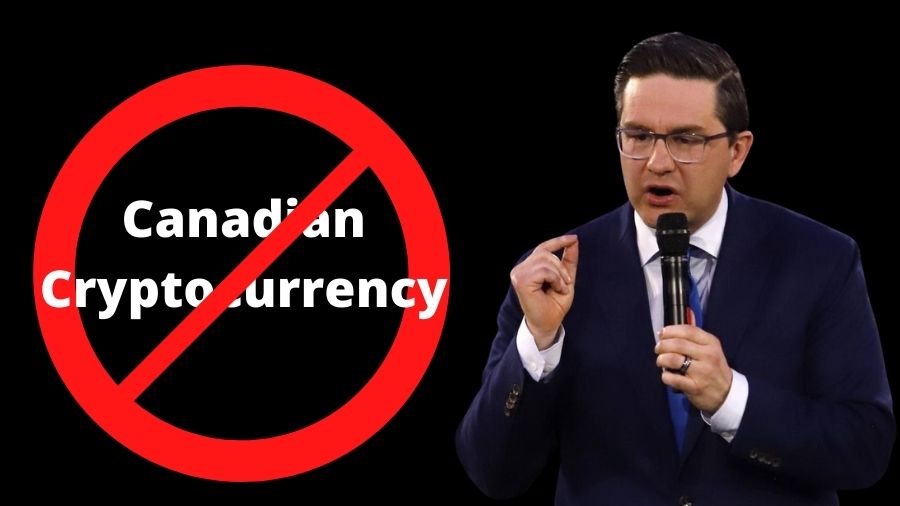 The front-runner for the Conservative Party in the race to become Canada’s next leader said on Thursday that if elected, he would prohibit the Bank of Canada from issuing a central bank digital currency. Pierre Poilievre, who is running on a promise to make Canada the world’s blockchain capital, also stated that the central bank’s balance sheet would be audited on a regular basis, including the COVID pandemic bond-buying program.

“A Poilievre government will ban a central bank digital currency and allow Canadians to have the economic and financial liberty that they deserve,” Pierre told reporters that had gathered outside the central bank of Canada building in Ottawa.

Pierre Poilievre has been a Conservative member of parliament since 2004 and is polling at the top of all polls ahead of a September vote that will be choosing a new leader for the main opposition party in Canada. If elected, Poilievre will most likely have to wait until 2025 for the next federal election because Prime Minister Justin Trudeau’s Liberals have a political support agreement with the New Democrats which is a smaller left-wing party.

Erin O’Toole was ousted as Conservative leader in early February after failing to defeat Trudeau in last year’s election, triggering the leadership race.

All throughout his election campaign, Poilievre has placed the blame for record inflation rates on the central bank’s purchases of government bonds during the pandemic, saying cryptocurrencies such as Bitcoin would prove to be a good way to “opt-out of inflation.” Poilievre is a big supporter of cryptocurrencies like bitcoin. He has suggested that by putting money into these investments, Canadians can “opt out” of inflation, and he does not want the Bank of Canada to offer a competing product.

Bitcoin has had a volatile recent run as central banks have raised interest rates to combat pandemic-driven inflation, making speculative investments less appealing. Bitcoin’s price has fallen by 40% since its peak in November 2021.

“Justin Trudeau has threatened the Bank of Canada’s independence with a half-trillion dollars of deficits that required the central bank to print money and cause inflation,” he said. “That’s ‘Justinflation,’’ he said, using a gag name for inflation rates under the Liberal government. “I will end it, by restoring central bank independence, mandating an independent audit of all the money printing and stopping the risky central bank digital currency.”

In March, Canadian inflation reached a 31-year high of 6.7%. Countries all over the world are dealing with escalating prices as a result of high demand and supply chain constraints. Russia’s invasion of Ukraine has increased commodity prices, exacerbating the situation.

But the officials of the Bank of Canada have rejected the claims this week. The Senior Deputy Governor of the Bank of Canada, Carolyn Rogers said to lawmakers on Monday that they “don’t see cryptocurrencies as a way for Canadians to opt-out of inflation or as a stable source of value.”

According to Governor Tiff Macklem, the Canadian dollar will continue to remain at the centre of the financial system of the country. On Thursday, the Bank of Canada did not respond immediately.

For several years, the central bank of Canada has been in the process of developing a digital currency (CBDC). The CBDC is currently in development, but the federal government has the power to make the final decision on its launch.