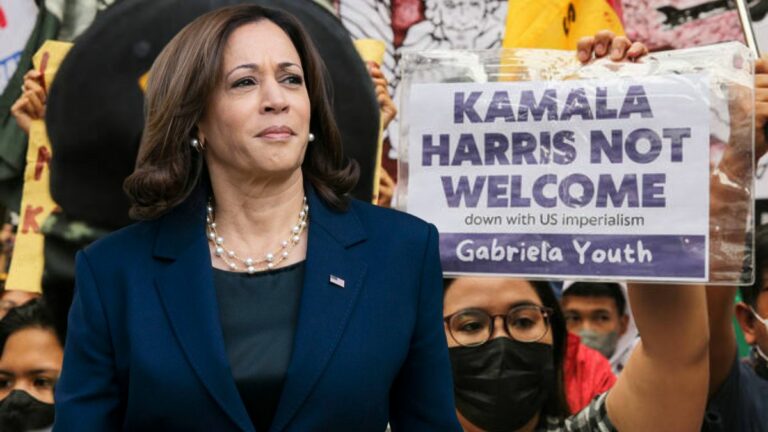 US-Philippines sparked a protest against Vice President of the US Kamala Harris; many protestors came to the streets of Manila to rebel against her visit and also alleged the US of “warmongering” over its military grounds in the Philippines.

On Monday, Kamala Harris met Philippine President Ferdinand Marcos Jnr and reasserted Washington’s “unwavering commitment” to its treaty ally. All the protestors marched outside and took out the rally with different symbols, and the cops formed barricades.

Liza Maza, Secretary General of the International League of People’s Struggle, an anti-imperialist group, said, “We don’t want our country to be used as a springboard or launching pad for the wars of the US against China or any other country.” Further, she said, “We are also against the warmongering of the US for the sake of asserting its hegemony in this part of the world … We want a peaceful Philippines and a peaceful region.”

Demonstrators also include the League of Filipino Students, a left-wing youth institution, and they protested with the slogan “Stop funding state terrorism in the Philippines,” “stop US military aid to the Philippines,” and “US Imperialism #1 Terrorist.”

Kamala Harris appended five new military provisions in the Southeast Asian country, where Washington will imbue a further US $66.5 million to increase its military presence, renewing the Enhanced Defence Cooperation Agreement (EDCA) that was signed in 2014 but was put on a halt by former President Rodrigo Duterte at the time when the US was badly criticized.

The Philippines’ assertions about the South China Sea have set off a long-running controversy with Beijing.

Harris said that Washington backs up Manilla in defense of international regulations and standards and promised that a strike on the Philippine armed groups, public vessels, or aircraft in the South China Sea would petition the US mutual defense commitment.

Marcos said that he didn’t see a future for the Philippines that didn’t incorporate the United States.

Assistant professor of political theory at the University of the Philippines Diliman Jan Robert Go said that Marcos had taken a resistant step on the South China Sea but was also eager to cut the advantage of trade with China, which would upgrade his standing domestically.

Go said that “Especially since the Philippines is facing difficult economic challenges, on top of his campaign promises to lower commodity prices, anything that would improve the economy, reduce the effects of inflation, and temper social sentiments would be a good step for his administration.”

The US Indo-Pacific policy, started under former President Donald Trump and carried by Joe Biden, looks for a stronger strategic and economic presence in Southeast Asia to cope with China’s increasing influence.

Go said that excluding the most vocal civil organizations, the Filipino community is neither encouraging nor against the engagements with Washington.

“But caring less about the possible implications of Washington’s moves in the region does not preclude Filipinos from being bothered by the aggressiveness of the US in the region, which is seen as a competition with an equally aggressive China.”

Harris pleaded with the women to take part in economic activities and be involved in civil groups before the representatives of many Filipino women’s groups.

The ILPS blamed US economic policies for getting worse and also for increasing poverty. It has requested the Philippines to control the presence of the US military, facilities, and military exercises. The activist group released a statement that reads it was the same in the past; UT hoped that the presence of the US military, women, children, and the LGBTQ group would become more dangerous to crimes and violence performed by US soldiers.

Go said that the resistance organizations such as ILPS are seen negatively by some Filipinos, and it is happening due to former president Rodrigo Duterte’s “hasty labeling” of opponents as “rebels” and “communists.”

US politicians’ visit to Asia has typically increased both the ceremony and arguments.

Korean Confederation of Trade Unions and South Korean civic organizations protested when Kamala Harris met President Yoon Sul Yeol in the month of September. The US military presence on Okinawa has promoted regular large-scale objections dating back to the 1950s.