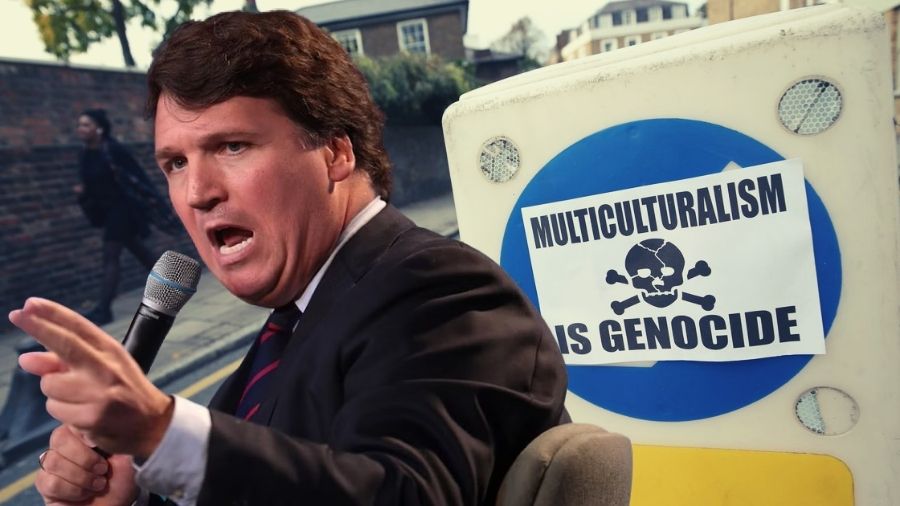 In 2021, during the time when Haitian migrants came seeking protection at the Del Rio, Texas border and many Haitian families were allowed to stay back in America and given asylum in the immigration court. The cable television host Tucker Carlson provided his own theory as to what was happening at the border.

In a segment titled “Nothing About What’s Happening Is an Accident,” Carlson said that the current U.S. border policy is designed to ‘change the racial mix of the country. … In political terms this policy is called the ‘great replacement,’ the replacement of legacy Americans with more obedient people from faraway countries.” Carlson concluded that President Biden’s policies with regard to the Haitian migrants have put the U.S. on a “suicidal” path.

“You’ve heard a lot about the great replacement theory recently, it’s everywhere we’re still not sure exactly what it is”

Since details of the Buffalo mass shooting emerged over the weekend, much of the media focussed on the shooter’s self-stated motivation: his belief in the “great replacement” theory, the notion that white Americans are being deliberately replaced through immigration. A gunman killed 10 people and wounded three others at the Tops Friendly Markets store in a predominantly Black neighbourhood in Buffalo. Eleven of the people who were shot were Black.

Carlson referred to the gunman as “mentally ill” and launched an attack on “professional Democrats” who had “begun a campaign to blame those murders on their political opponents”. The Buffalo gunman revealed that the motive of the shootout was the influence made on him by the white supremacists and extremists.

Carlson has made repeated efforts time and again to distance himself and the Great Replacement theory and now says that he is unsure of what it is.  “You’ve heard a lot about the great replacement theory recently, it’s everywhere … we’re still not sure exactly what it is. Here’s what we do know for a fact: There’s a strong political component to the Democrats’ immigration theory. We know this because they have said so … They say, out loud, ‘we are doing this because it helps us win elections,'” said Carlson.

Carlson has even made claims that the Democratic party is doing this to win votes during the elections. “The Democratic Party has decided that rather than convince you, people who are born here, that their policies are helping you and making the country better and stronger, they will change the electorate,” said Carlson.

What is the Great Replacement Theory?

The “great replacement” theory, in simple terms, states that welcoming immigration policies, particularly those impacting nonwhite immigrants are part of a plot designed to undermine or “replace” the political power and culture of white people living in Western countries. Multiple iterations of the “great replacement” theory have been and continue to be used by anti-immigrant groups, white supremacists, and others.

White supremacists argue that the influx of immigrants, people of colour more specifically, will lead to the extinction of the white race. The “great replacement” theory is sometimes seen in other ways such as claims of voter replacement and immigrants invading America, the first claim assumes that immigrants and nonwhite people will vote a certain way, ultimately drowning out the votes of white Americans.

According to the Anti-Defamation League (ADL), the “great replacement” theory has roots in books written during the French nationalism movement, dating back to the early 1900s. However, the theory’s more contemporary use is attributed to Renaud Camus, a French writer who wrote: “Le Grand Remplacement” which translates to “The Great Replacement” in 2011.

A core belief of the white supremacist movement is the 14-word slogan, “We must secure the existence of our people and a future for White children.” That slogan was coined by David Lane, a member of the white supremacist group The Order. Tucker Carlson was a very strong supporter of the Great Replacement Theory. Carlson has spoken in detail regarding this theory on his show.

Tucker Swanson McNear Carlson, born on 16th May 1969, is an American television host and conservative political commentator who has hosted the nightly political talk show Tucker Carlson Tonight on Fox News since 2016. Carlson began his media career in the 1990s, writing for The Weekly Standard and other publications.

An ardent advocate of former U.S. President Donald Trump, Carlson was described by Politico as “perhaps the highest-profile proponent of ‘Trumpism'”, while also noting that Carlson is willing to criticize Trump when he believes that the former president is straying from that ideology. Carlson is known to have had a great impact on the decisions Trump took during his presidency.

Carlson has been a leading voice of white grievance politics. Carlson’s TV show Tucker Carlson Tonight was one of the most-watched shows in July 2021. Carlson is a vocal opponent of progressivism and critic of immigration and has been described as a nationalist. Carlson has promoted conspiracy theories about topics such as demographic replacement, COVID-19  and the 2021 U.S. Capitol attack.

Carlson is a vehement critic of immigration and has been described by multiple writers as demonizing both legal and illegal immigrants. Carlson has repeatedly promoted a conspiracy theory that Democrats are seeking “demographic replacement” to increase their voter base, and in 2021 he described this as “the Great Replacement”, using white nationalist terminology. Carlson has been accused of being a racist but he denies all such acquisitions.” I’m not racist. I hate racism,” said Carlson.