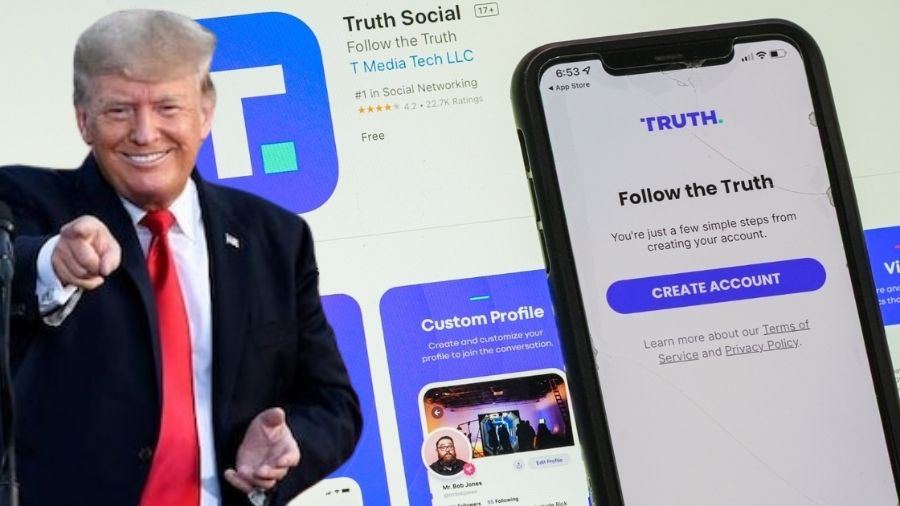 Truth Social is a brand new social media platform launched some time ago, this year by Trump Media & Technology Group, the technology firm of former US President Donald Trump (TMTG). The app was created in response to a ban on the former president imposed by Big Tech platforms such as Facebook, Twitter, and Youtube in January 2022, following the Trump supporters’ attack on the Capitol building. Trump claims that the Truth Social platform encourages free speech and a “cancel-culture.” “Truth Social is America’s “Big Tent” social media platform, encouraging open, free, and honest global dialogue regardless of political ideology.” -describes the Truth Social official website.

Former President Donald Trump’s Truth Social app has not yet been made available for those who use android devices. But the team could be underway to launch it on the Google Play Store. Former President Donald Trump announced at a recent rally that the android version is in the beta testing stage. Stay tuned with us for regular updates about the Truth Social android app

According to Chief Executive Devin Nunes, former US President Donald Trump’s Truth Social app will be available on a web browser at the end of May. Truth Social has yet to be approved for release in the Google Play store for Android devices, according to Nunes’ post on the platform. “End of May we will launch PWA (Web Browser) this will allow access from any device,” Nunes wrote. “After that, we will launch an Android App… pending approval from Google!”

Also read| Truth Social for Windows – Can I use TruthSocial.com on my PC

Truth Social app features and how it works

Truth Social is similar to other social networking apps such as Facebook and Twitter. You can make a profile, share your thoughts, and see what other users are posting here. You can also build a following. In the app, only the names of the features were changed.

Truth Social has a search feature that allows you to look up people, organisations, and news outlets of interest to you. You can also stay in touch with people by activating your notifications. However, as previously stated, before you can begin creating an account, you must first join the waitlist. Fill out the form on Trump’s website to do so.

Truth Social media works similarly to Twitter, but several features, such as polls and bookmarking, have been removed. Users can create “Truths” posts, similar to tweets, and share other users’ posts with “Retruths,” similar to retweets. Truth Social also has a newsfeed called “Truth Feed.”

Following the release of Truth Social’s press release, TMTG announced a merger with DWAC, causing the DWAC stock price to skyrocket. On October 20th, the stock price of DWAC was $9, and on October 21st, the stock price increased by 500% in a single day to $50. DWAC’s stock price is 95$ as of October 22nd. Trump Media & Technology Group has filed trademark applications for terms like “Truth Social,” “Truthing,” “Rethruth,” and “Post a truth.”

The brand new social media app has also added millions more to Donald Trump’s net worth. According to our calculations, Truth Social has increased the former president’s net worth by $430 million, bringing his fortune from $2.4 billion a year ago to $3 billion today.

In April 2022, the CEO of TMTG announced that Truth Social was migrating its website and application to the infrastructure provided by Rumble’s Cloud. This merger will have a significant positive impact on the development and performance of this application. Rumble’s stock price has increased since the collaboration.

During the initial period of launch, Donald Trump’s social media site Truth Social hit many roadblocks along its journey. Truth Social was one of the most downloaded apps on Apple’s app store on February 21st, the day of its release. However, several people who downloaded it discovered that they were unable to use the app. Some were unable to open an account, while others saw troubleshooting due to server overload. The app also saw huge hacking problems prior to its release. On top of that, there was a massive waiting list of nearly 1,500,000 people who were simply trying to register for the app. The app has still not been launched for android users or users outside of the  United States, but the team is working on that.

But all of the initial problems are starting to get resolved. The former president has also started posting on the app from his official account.

“I’M BACK!” Trump shared a photo of himself a few days ago on Truth Social. He also added the hashtag “#COVFEFE” at the end of the post, a reference to the bizarre tweet he made before being banned from Twitter in 2017.