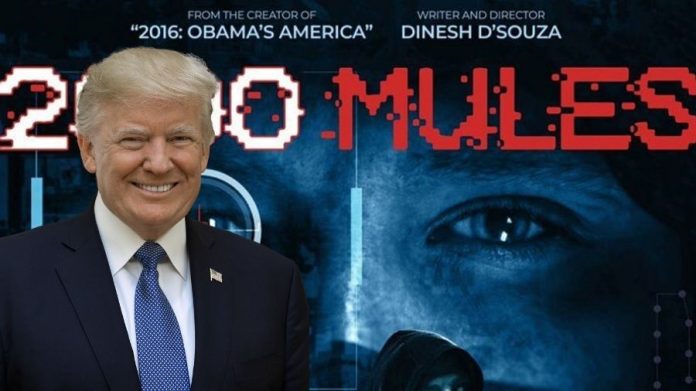 Former President Donald Trump recently hosted a Make America Great Again ball in his Florida resort at Mar-a-Lago. This ball was hosted in honour of the premiere of the movie 2,000 Mules. The plot of this movie is the alledged ballot trafficking that happened during the 2020 presidential elections. The former President’s most faithful allies were present at the premiere. The guest list included Kyle Rittenhouse, a few GOP representatives including Majorie Taylor Greene, Louie Gohmert, Matt Gaetz and Lauren Boebert, MLK’s niece Alveda King, Rudy Guiliani and Mike Lindell was also part of the guest.

The 2,000 Mules movie aims at bringing to light the 2020 presidential elections. This movie by Dinesh D’Souza supports the former president’s claims of a stolen election. The title ‘Mules’ makes reference to the agents who secretly dropped off ballots at various drop boxes during the 2020 elections. Mr Dinesh D’Souza, whose film titled ‘2000 Mules’ claims to have evidence of all the widespread fraud and swindling of votes done during the 2020 elections. All the evidence that is going to be exhibited in the documentary has been procured through video cameras and geo-tracking of cell phones.

2000 Mules shows surveillance video of Georgia voters dropping off multiple ballots. The movie hinges on the theory that 2,000 people in five states, including 242 in metro Atlanta, collected and delivered multiple absentee ballots, a practice called “ballot harvesting.” Georgia law prohibits voters from delivering anyone’s ballot besides their own, with exceptions for family members and caregivers of disabled voters.

In the movie, D’Souza promotes allegations made by True the Vote, a Texas-based organization that gathered drop box surveillance video and cellphone location data in parts of Georgia, Arizona, Wisconsin, Michigan and Pennsylvania. All were swing states where Biden won. True the Vote founder Catherine Engelbrecht said in the movie that her organization tracked cellphones that were near both drop boxes and unidentified nonprofit organizations, which she believes coordinated the ballot harvesting operation.

Trump is supporting this movie because its plot revolves around how the 2020 presidential elections were stolen from him by opponent and Democrat Nominee Joe Biden. “Highly Respected Dinesh D’Souza, working together with Catherine Engelbrecht of True The Vote, just released a trailer to their new movie ‘2000 Mules’ that shows the world exactly how the 2020 presidential elections were rigged. The movie exposes the lies of Democrats, RINOs and fake news who say it was the ‘most secure election in history.’

“It was perhaps the least secure in history. The ballot box was stuffed like never before and its all on video. Ballots were trafficked and sold in a massive operation in each swing state. The evidence is so damning, what will the cowards who sat and did nothing about the stolen election say now? The way our votes were taken away is a disgrace to our nation. It must be fixed.” – said Former President Donald Trump.

Former President Trump is very pleased with this move made by Mr Dinesh D’Souza to bring to the light and to the notice of people what went down during the so-called ‘most secure election in American history.

The film, produced by conservative documentarian Dinesh D’Souza, includes information about an investigation by election integrity group True The Vote and features its founder Catherine Engelbrecht and its election intelligence analyst Gregg Phillips.

Kyle Rittenhouse is a 17-year-old boy from Antioch, Illinois who shot two people and wounded one person. This took place in 2020 during the protest and riots that took place after a black man named Jacob Blake was shot though it was not fatal. Rittenhouse argued during his whole trial that he shot the people in self-defence and he was thus acquitted of all charges. Kyle Rittenhouse shot Joseph Rosenbaum, a 36-year-old unarmed Kenosha man four times in a parking lot and Anthony Huber, a 26-year-old and was shot once in the chest by Kyle. Rittenhouse even shot 26-year-old Gaige Grosskreutz once in the right arm, Gaige was severely injured though he survived.

Many right-wing politicians were very happy seeing that Kyle Rittenhouse had been acquitted as he shot in self defense. Former President Donald Trump showed support for the idea that Rittenhouse was acting in self-defense. The Republican senator Ron Johnson said that ‘Justice has been served’ when Rittenhouse got free of his charges.

Majorie Taylor Greene born on 27th May 1974 is an American politician, businesswoman and conspiracy theorist. Greene has promoted far-right, white supremacy and has promoted so many conspiracy theories in context with the 9/11 attack, white genocide and so many more. A member of the republican party and a strong supporter of former President Donald Trump. Majorie Greene was elected to Congress in 2020 after the retirement of Republican Tom Graves. Greene is also a strong supporter of Trump’s claims of a stolen election. Greene has repeatedly claimed that ‘Trump won the elections in a landslide victory that was stolen from him.’

Majorie Taylor Greene is facing allegations of organizing and promoting the 6th January 2021 attack on the U.S. Capitol. Though Majorie Greene has denied all the claims she is facing trials. Lawyers for voters seeking to bar the far-right Republican Marjorie Taylor Greene from Congress over her support for the January 6 insurrection have accused her of lying in a hearing in the case. Greene had been caught with a text message to Mark Medows then white house chief that showed her involvement in the Capitol attack and was caught lying that she had nothing to do with the 6th January attack. Majorie was spotted at the Mar-a-Lago resort in Florida attending the premiere of Dinesh D’Souza’s movie 2000 Mules.

Laurent Boebert born on 19th December 1986 is an American politician, businesswoman and gun rights activist. Boebert is a white supremacist and opposes abortion, same-sex marriage and sex education. Laurent is a Trump supporter and also supports his claims of election fraud. Laurent was also in support of the rioters who stormed the U.S. Capitol building on 6th January 2021. In 2021 Donald Trump has endorsed Colorado lawmaker Lauren Boebert for re-election to Colorado State. Laurent was also seen amongst the guests in attendance at the 2000 Mules movie premier.

Laurent Boebert was sworn into the Congress on 3rd January 2021. As of January 29, 2022, she had introduced 17 bills and seven resolutions out of which none was passed. the day before the storming of the U.S. Capitol, Boebert urged people to “remember these next 48 hours”, saying they would be among the most important in American history. Boebert went on to call the Capitol Attack the American Revolutionary War of 1977. Laurent Boebert is a strong advocate for Gun rights.

Crowd reaction to the movie 2,000 Mules

The people were in utter shock when the 2,000 Mules movie came out. People say that it is good the truth is finally out for everyone to see. The crowd reacted very positively to this film. In less than 12 hours the film has grossed more than one million dollars on in theatres and on Rumble. “The success of ‘2000 Mules’ on Rumble is a great sign for creators who do not want to be silenced or censored for their speech,” said Dinesh D’Souza.

Other reviews of the film