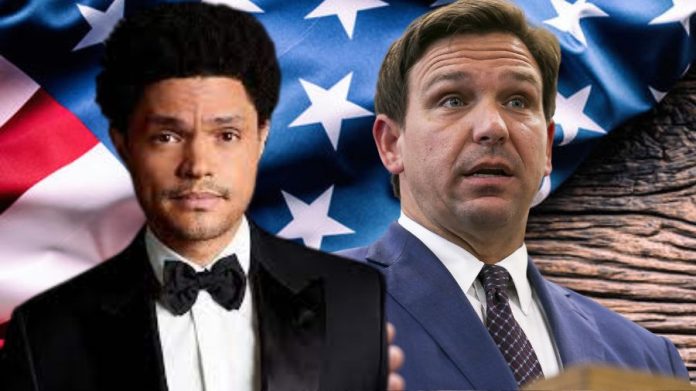 Florida Gov. Ron DeSantis tore into comedian Trevor Noah for “lying” about his attendance at the White House Correspondents’ Dinner last week, claiming that the annual event holds no interest for him. During Saturday night’s White House correspondents’ dinner, Trevor Noah, the host of The Daily Show, took shots at several prominent politicians and media figures.

Noah claimed the Republican firebrand was in the audience at one point during the show before launching a few jabs at the fictitious Floridian.

“Busy trying to outmanoeuvre Trump for 2024”

At one point during the show, Trevor said that the Florida governor was “busy trying to outmanoeuvre Trump” for the 2024 presidential elections. Ron DeSantis is also reportedly planning to run for president in the upcoming elections in 2024, even though the Florida Governor has dismissed any talk of his run.

“One of my favourites, Ron DeSantis, is here,” Noah declared. “Oh man, I’m actually surprised that he found the time. You know he has been so busy trying to outmanoeuvre Trump for 2024. I see you, Ron. I see you, player.”

“Trump was the original Terminator, DeSantis is like the T-1000,” -Noah said, calling DeSantis an upgraded version of the former president, using a classic movie reference.

“You’re smarter than him, you’re slicker than him, you can walk down ramps,” Noah said. “Because you see, no, Trump said he won the election, but everyone was just able to look at the numbers and see he was wrong. That’s why Ron DeSantis is one step ahead, first you ban the math textbooks, then nobody knows how to count the votes. Boom, my man!” -Noah said.

Also read| Ahead of 2024, Ron DeSantis Follows the Same Playbook as Donald Trump

The state rejected 54 math textbooks for prohibited topics and then released examples that it claims to support its decision to reject the textbooks. The Florida Department of Education released examples of critical race theory and social-emotional learning that Gov. Ron DeSantis claimed were discovered in unpublished books. Some of the books were eventually reinstated by the FDOE.

Noah also said that DeSantis was “being coy” for not revealing whether he received a Covid 19 booster vaccine.  “He won’t even tell people if he got the booster,”- he said. “Or as they say in Florida, don’t ask, don’t tell, am I right? I see you, Ron.”

“I would never attend that,” -responds Ron DeSantis

The Florida Governor seems to have taken the humorous jabs from Noah at heart, and clarified on Monday saying that he “would never attend that [the White House Correspondents dinner]”, at a press conference on Monday in Jacksonville. When asked about Noah’s routine, DeSantis said, “I have no interest in that.”

DeSantis expressed surprise at Noah’s “verifiable” lie, calling it a strange choice given the nature of the gathering. “Why they would want to perpetuate a lie about that I don’t know,” DeSantis said. “But I think it just shows you why that cabal of people in DC, NY is so reviled by so many Americans. I think it’s a reputation that’s been well-deserved.”

DeSantis said that his office did receive an invitation for the dinner, but it was later “rejected”.