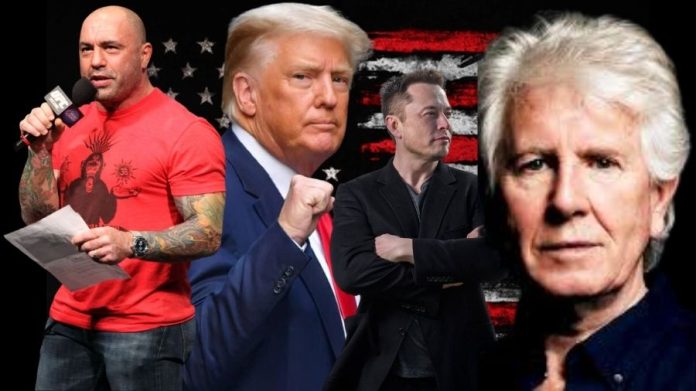 Graham Nash, the 80-year-old singer-songwriter conveyed his message on how he felt about some of the most famous and controversial names in America. He went on to share his opinions about the Tesla Motors CEO Elon Musk’s take over of Twitter, the former President of the United States of America Donald Trump and the 2020 presidential elections and his Twitter account being reinstated and last but not the least the comedian Joe Rogan’s controversial news of spreading false and wrong news regarding the pandemic on Spotify through his podcasts.

Nash, along with his bandmates of CNSY, took a joint decision of withdrawing their music from the audio streaming platform Spotify. The members of CNSY jointly came to this conclusion because they did not like Joe Rogan spreading misinformation regarding the COVID virus on his podcast. He also expressed concerns about if the former President’s Twitter account will be reinstated now that the application has a new owner, Elon Musk.

What does Graham Nash have to say about Elon Musk, Donald Trump and Joe Rogan?

“Some of the craziest people are using their voices for the strangest reasons,” Nash was quoted as saying.

Nash expressed his opinions on how he thought Joe Rogan is a very controversial person. There are a lot of controversies surrounding his past and present. Nash also let the people know about how he didn’t want his music on Spotify because of all the misleading information Joe Rogan kept spreading.

There’s an incredible amount of disinformation and misinformation going on, particularly with Joe Rogan and Spotify. When he puts on people that say: ‘You shouldn’t be wearing a mask’ and ‘You shouldn’t be getting these vaccinations because they’re putting seeds of information into your DNA…’ C’mon! It’s a f***ing virus and we’re trying to deal with it, you know? So yeah, I was happy to take my music off there.” – said the 80-year-old in an interview.

Nash had a lot to say about Elon Musk’s takeover of Twitter the Social Media application. Nash is of the opinion that social media can take a nasty turn and go very wrong if not handled with care and delicacy. “With Elon Musk taking over Twitter, maybe, there’s a whole other mess there. Is he gonna let Trump back on? We don’t seem to have learned from history, do we?” – said Graham Nash.

Nash wonders now that Musk has taken over Twitter will he let the former President’s account be reinstated. Nash has expressed clear dislike for former President Trump. Graham Nash says that he has never witnessed anything so dramatic in politics before. “When we were going through the madness with Nixon and Watergate we thought it couldn’t get any crazier than that. This is way crazier! Our very democracy is at stake here, in very real terms. The rise around the world of right-wing autocrats is very scary.” – Says Nash.

Graham Nash expressed his views even regarding Trump. He says that he is someone who has seen American politics for almost 50 years and said a lot about the 2020 presidential race. “I’ve been here since ’68 and watched every political contest going on and this is by far the strangest one, I have never seen a party in such disarray as the Republicans and such extreme levels of hatred and animosity towards other people.” – Nash tells in an interview.

Elon Reeve Musk born on 28th June 1971 is an entrepreneur, business magnate and investor. Musk is the CEO of many companies. He is the founder of SpaceX, Tesla Motors, The Boring Company and also co-founder of Neralink and OpenAl.

Musk started his career with his two internships in Silicon Valley in 1994. Musk even enrolled in Stanford University but dropped out of Stanford after merely two days deciding to join the Internet boom and launch an Internet startup. He further went on to receive a PhD in material science from Stanford University.

Musk’s net worth has been valued at around US$265 billion in 2022. Forbes and Bloomberg Billionaire’s index named Musk the wealthiest man in the world. Elon Musk’s latest venture is that he bought twitter for a whopping amount of $44 billion dollars on the 25th of April 2022.

After graduating from the Wharton School with a bachelor’s degree he became the President of his father’s real estate company and renamed it The Trump Organization. He diversified the business by entering the construction industry, he also had many side ventures. The Former President made many misleading statements and claims during his presidency and promoted many conspiracy theories. He later went on to call this deception a way of doing politics.

Donald Trump later joined politics. In 2000, he tried running for the California and Michigan primaries but later dropped out. Trump even contemplated running for the presidency in 2011 against Barack Obama but later announced that he won’t run. Trump contested in the 2016 presidential elections winning against Democrat Nominee Hillary Clinton. Trump served as the President till 2020 when he lost the 2020 presidential elections to Democrat Nominee Joe Biden. Former President Donald Trump’s political agendas have been described as populist, protectionist, isolationist and nationalist. Many of his comments and actions have been shown to display racism he has also been claimed to believe in white supremacy and many as misogynistic.

Joseph James Rogan born on 11th August is an American podcaster, comedian, actor and former television presenter. His podcast the Joe Rogan Experience is a podcast which discusses current events, comedy, politics, philosophy, science, and hobbies with a variety of guests. Rogan as a child was into basketball and martial arts. He attended the Unversity of Massachusettes but found it of no use and great importance to him so Rogan dropped out early. When Rogan was 19, he won the US Open Championship taekwondo tournament as a lightweight champion.

Joe Rogan had no real intention of becoming a comedian and wanted to establish a career in kickboxing but he was a big fan of comedy. As Rogan grew he performed for an open mic in Boston in 1988. This is when he did stand up for the First time. Rogan did stand up comedy for 6 years starting from 1988 to 1994. Rogan was also a part of hardball and the NewsRadio for 5 years. Rogan gained fame for being the UFC commentator and Fear Factor.

Graham William Nash born on 2 February 1942 is an English singer-songwriter and musician. He gained a light tenor voice for his songwriting contributions as a member of the English pop/rock group The Hollies. Nash wasn’t an American citizen in 1978. Nash is a photography collector and a published photographer. Nash holds four honorary doctorates including one from the New York Institute of Technology, one in Music from the University of Salford and his latest Doctorate in Fine Arts from Lesley University in Cambridge, Massachusetts.

Nash initially met the two people he was later going to form a band in 1966. Nash met both David Crosby and Stephen Stills in 1966 during a Hollies US tour. On a subsequent visit to the US in 1968, he was introduced to Crosby by mutual friend Cass Elliot in Laurel Canyon Los Angeles. Nash left the Hollies to form a new group with Crosby and Stills. The Group was a trio including Crosby, Stills and Nash but later went on to include Neil Young in 1969: Crosby, Stills, Nash & Young (CSNY).