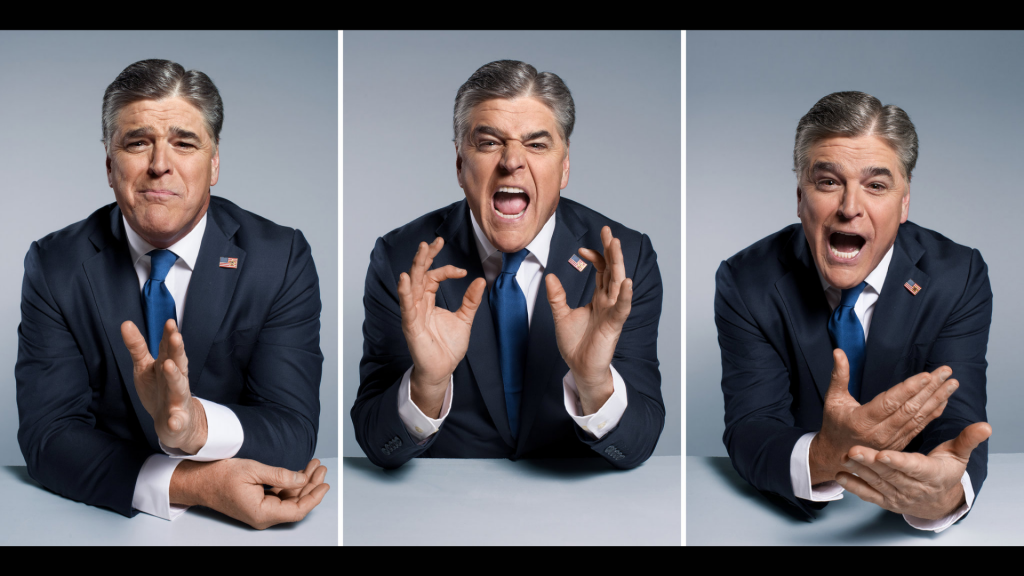 Sean Hannity, full name (Sean Patrick Hannity) an American talk show host and conservative political commentator said on Friday that Vladimir Putin was trying to play the ape of the former president of the United States Donald Trump when he staged a huge rally at Moscow’s Luzhniki Stadium.

On his radio show, Hannity stated that Vladimir Putin was “channelling his inner Trump” who once joined Trump onstage at a campaign event.

“He had what looked almost like ‘The Big House’ in Michigan. Their football stadium, I think, holds 110,000 people,” Hannity said of Putin’s huge flag-waving rally in support of Russia’s invasion of Ukraine.

“By the way, if you didn’t show up you possibly got in trouble,” Hannity noted. “My only guess, I’m sure many people showed up just out of fear. That’s what authoritarianism is all about, and we should know that by now.” Later, on his prime-time Fox News show, Hannity said the “manufactured” rally was Putin’s “best attempt to look like Donald Trump.” He also called Putin a “murderous thug” and said his war on Ukraine had become a “humiliating disaster.” Russians were “required to attend” the event,” he said, “unlike a Trump rally.”

He also attacked Joe Biden, current president of the United States of America.

“Vladimir Putin can’t get through a speech without screwing that up”- kind of like Joe Biden after having technical problems at the Moscow Rally.

According to the report, the stadium was filled with thousands of government workers who were compelled to attend the rally. Unlike a Trump rally, whoever stands against Vladimir Putin’s war in Russia is thrown in prison.

Sean Hannity spewed poison at Biden for his incompetence in handling the Ukrainian crisis, saying, “Vladimir Putin is not in a good place. And right now the world is facing an extremely dangerous and critical tipping point. And what happens in Russia and Ukraine will have reverberations all over the world. But guess what? Our fearless leader Joe Biden, he’s taken another weekend and Delaware ice cream, a lot of nap time.”

On his show on Friday night, Sean read an assertion which was issued by Putin’s spokesman, Dmitry Peskov, after Biden called Putin a war criminal. “Given such irritability from Mr Biden,” Hannity read, “his fatigue and sometimes forgetfulness … fatigue that leads to aggressive statements, we will not make harsh assessments, so as not to cause more aggression.”

“Now, like I’ve been saying, Biden’s weakness on the world stage is emboldening bad actors all across the globe,” Hannity said after reading the Russian talking point in the exact words.

Biden and Democrats had “abandoned the peace-through-strength strategy that was successful” under Trump and Ronald Reagan, the pro-Trump flack added.

Hannity attacked for his jibe at Ukrainian President Zelensky

Earlier this week, Hannity was criticised for saying Volodymyr Zelensky, the president of Ukraine, was “begging Joe Biden for help” but the US president was too “weak” and “frail” to appropriately come to his support;

As the Guardian reported, Putin spoke from a stage captioning slogans such as “For a world without Nazism” and “For our president”, and told “a large flag-waving crowd” Russia “hasn’t seen unity like this in a long time”.

Trump has continually applauded Putin for being “smart” regarding Ukraine, though he has also criticized the attack.

Hannity is a loyal supporter of the former president with a close understanding of Trump’s rallies and has also occurred at one in Missouri in 2018, which earned him an admonishment from his employer, as did his approval of Trump in a campaign video in 2016. In the 2020 campaign, Hannity apparently wrote Trump a campaign ad.