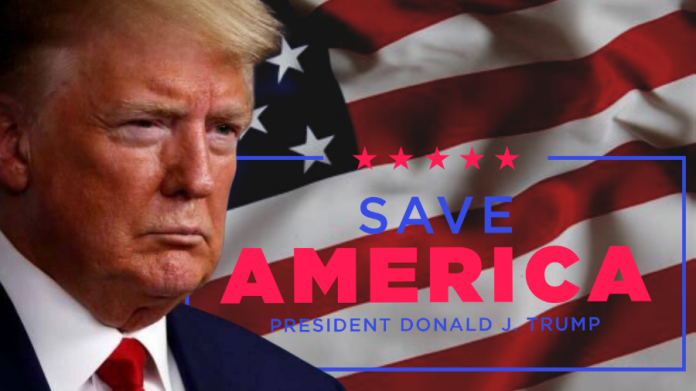 Donald Trump’s Save America rally in Wisconsin is scheduled to be held on Friday, August 5, 2022, at 7:00 PM CDT. The venue for the rally is Waukesha County Fairgrounds, 1000 Northview Road, Waukesha WI, 53188. Tickets for the Save America rally, Waukesha, Wisconsin are available at the official Save America website. Tickets are free, and you can register up to two tickets from a single mobile number. Follow the steps provided below to register for tickets:

Former President Donald Trump‘s Save America rally will be attended by thousands of his supporters in Wisconsin. If you will not be able to attend the event in person, we have arranged a live stream of the full event. We will be adding a live stream on the day of the event. Until then, stay tuned with us for regular updates.

Speakers for the rally

Former President Donald Trump will take the stage as keynote speaker at the rally. The official announcement for the rally reads,  “remarks in support of Tim Michaels for Governor of Wisconsin and the entire Wisconsin Trump Ticket.” Sen. Ron Johnson has announced in a statement that he will not be attending the former president’s rally, citing Trump’s endorsement of Michaels as the reason.

“Wisconsin will always welcome presidents of both parties. I hope former President Trump enjoys his time in our state and I’m sure those attending will enjoy rallying with others who love America,”  said Johnson. “Because this event supports one of the Republican gubernatorial candidates, I will not be attending. I do not endorse candidates in contested primaries. Instead I rely on the good judgement of Republican voters to choose our candidates and will be fully supportive of those who win their primary elections.”- he added further.

A previously scheduled rally in Arizona was recently postponed in light of Ivana Trump’s death. The former president released a statement saying that the rally will be held later in Prescott valley.

“Out of love and respect for Ivana, our big Arizona Rally will be postponed until next Friday,” the statement sent by Trump’s Save America political action committee reads. “On behalf of our family, I want to thank everyone for all of your thoughtful messages of prayers and support.”- said Trump.

GOP candidate Kari Lake who has been endorsed by Trump, shared the news along with her condolences in a Tweet.

“My heart goes out to President Trump and his children,” she wrote. “I am saddened to receive news that tomorrow’s Save America rally has been canceled, however I know firsthand that it is important to be surrounded by family when you lose a mother.”