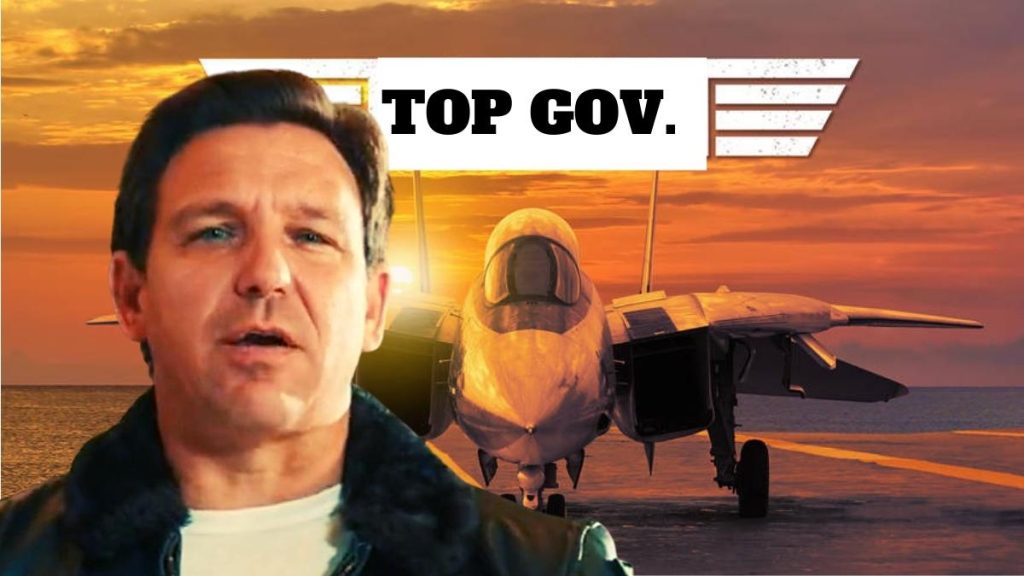 Governor Ron DeSantis has recently released a Top Gun-inspired campaign ad aimed at “corporate media.” The Florida governor’s wife, Casey DeSantis, shared the viral video on Twitter, where it has been viewed over 670,000 times.

Florida First Lady Casey DeSantis tweeted the ad, with a caption that read, “Top Gov… Dogfighting … Taking on the Corporate Media … Rules of Engagement are as Follows.”

Rules of Engagement are as Follows:

The ad titled “Top Gov,” shows Florida Governor Ron DeSantis dressed up as a Navy pilot, battling the corporate media. The commercial is based on the popular film “Top Gun” and its sequel, “Top Gun: Maverick.” Both of the movies were released earlier this year in the summer.

Ron DeSantis appeared in an interview with Fox News to discuss the advertisement.  He revealed that it was not his intention to cast himself as Maverick. “I think it was something that my wife initially thought about,” he said during the interview. “The rules of engagement are as follows: Number one—don’t fire unless fired upon but when they fire, you fire back with overwhelming force. Number two—never ever back down from a fight. Number three—don’t accept their narrative.” -DeSantis said in the campaign ad.

DeSantis’ only son, Mason who was born in 2018, also appeared in the video with him in the cockpit of a plane.

Florida Governor Ron DeSantis is one of only seven governors who are veterans of the United States. He is also the only one who has served in a combat zone. DeSantis served as the legal advisor to the commander of SEAL Team One, Special Operations Task Force-West in Fallujah, Iraq, in 2007. While attending Harvard Law School, he was commissioned as a Navy officer and assigned to the Navy Judge Advocate General’s Corps.

DeSantis is heavily favored to win reelection in November against both of his top potential challengers. The Florida Governor has raised $165.6 million since 2019. DeSantis leads former governor and current Rep. Charlie Crist (D-FL) by 6 points in the RealClearPolitics average of polls.

Reactions to the ad called it “so cringe”

Since its release on Twitter, the Florida Governor’s “Top-Gov.” campaign ad has been shared several times. It has also received a lot of criticism. Some point out the irony of the ad where DeSantis is dressed up as a “tough guy” while he hesitates to take questions from reporters in real life. Others say his priorities are “misplaced.”

“#Florida @GovRonDeSantis, who’s too scared to take questions from FL reporters about real issues, cosplays as a tough guy in campaign ad,” wrote one Twitter user.

#Florida @GovRonDeSantis, who’s too scared to take questions from FL reporters about real issues, cosplays as a tough guy in campaign ad. https://t.co/kNehIYhlmD

Another user wrote, “This is so cringe. I literally am frozen in a cringe position from the cringeyness of this video.”

This is so cringe. I literally am frozen in a cringe position from the cringeyness of this video. https://t.co/qJBP3J8htS

CTV anchor Ian White, with heavily loaded sarcasm in his tone, said, “Taking on the corporate media” in a commercial that airs on every TV newscast in Florida.”