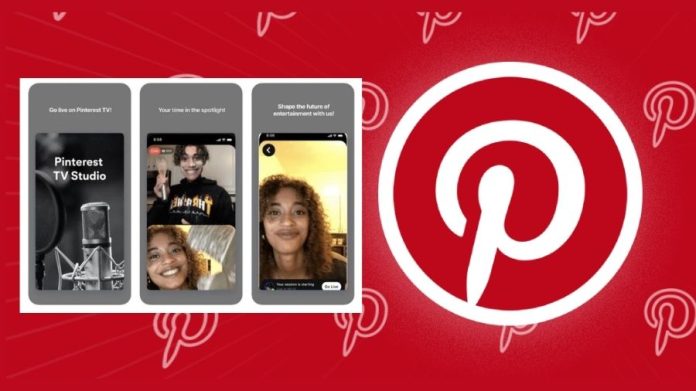 Pinterest is expanding its video offerings yet again, this time with the launch of a new, separate ‘Pinterest TV Studio’ app, which is designed to help live-stream creators improve their streaming setups with different cameras capability, improved editing tools, and more. Pinterest quietly released a new app earlier last week on both the Apple and Google Play stores, as first reported by TechCrunch, though it’s only available to a limited number of users at the moment. The launch of the app was not announced by the company, possibly because it is not yet available to all creators.

How can we gain access to live streaming on Pinterest’s new app?

“Upon first launch, creators must enter a code or scan a barcode provided by Pinterest in order to gain access to the live-streaming tools the app provides,” according to TechCrunch.

So it’s not officially released, but it does exist and is a working app for a select group of users. This signals the next phase of Pinterest’s video content push, as well as a possible shift into live-stream shopping that also has become more popular in social media circles in recent years.

Live-stream shopping has already been a big business in China, where revenue from the service is expected to reach $400 billion by 2022, which is nearly half of all eCommerce spending in the U.s. last year. Furthermore, live-stream commerce is becoming increasingly popular among younger audiences, with users aged 27 and under experiencing the fastest adoption. TikTok, Instagram, and YouTube have all developed their own live-stream buying approaches as a result of this, and it appears that Pinterest, too, is eager to jump on the live-stream shopping bandwagon as part of its expanded content push.

The app is essentially a supplement to Pinterest’s ‘Pinterest TV’ service, which debuted in November of last year. Initially airing a series of live, shoppable episodes featuring various Pin creators, Pinterest appears to be looking to expand the initiative even further, most likely into a continuous live stream of various brands and content producers showcasing their content, that can be purchased as you watch. Pinterest will need to vet the broadcasters it allows into the initiative now that it’s live, so while there’s a separate app for this purpose right now, it’s unsure how long it takes Pinterest to increase access to all users, if it ever does.

Again, live-stream marketing is already huge in China, and thousands of people are tuning in to various US-based influencers’ regular commerce-focused TikTok broadcasts. It appears to be a safe bet, especially given Pinterest’s focus on artisan goods and direct selling, and the platform’s recent declaration that video is “a fundamental medium for inspiration and planning,” indicating that it will likely increase its video focus in the future.

It may present significant opportunities for eCommerce businesses; we’ll keep you updated on any developments. The addition of a dedicated live streaming app, on the other hand, is another example of Pinterest rethinking its position in the broader social media landscape, where TikTok’s rise has pushed other platforms to adopt a video-first approach. Today, major social media platforms such as Instagram, Facebook, Snapchat, and YouTube all have a TikTok-style short video feature, and the majority of them also have live video features.

What kind of content will we see on the App?

Meanwhile, Pinterest has been focusing on video with the introduction of Idea Pins, a video-first mashup of TikTok-style short-form video content and clickable Stories. During last week’s earnings call, the company stated that the save-rate of Idea Pins has increased by over 25% quarter over quarter.

Pinterest users can follow numerous video creators who are more likely to visit the site than those who do not, according to the company. Meanwhile, Pinterest launched Pinterest TV in November, a series of live, shoppable videos from creators covering food, home, fashion, beauty, DIY, and more. The shows are broadcast live and then made available for on-demand viewing.

The brand-new Pinterest TV Studio app has been available on the Google Play store since May 2, 2022, according to Sensor Tower data. It hasn’t received enough downloads to place the app on any app store charts, and the company can’t estimate the total number of downloads at this time. Outside of the United States, the app is available in Canada, Australia, the United Kingdom, and Germany, indicating a potential global expansion of Pinterest TV efforts.

Pinterest issued a statement confirming the app’s launch but said it didn’t have any additional information at this time. “As more Creators use Pinterest TV to create innovative programming, we’re constantly experimenting with new ways to help them bring their ideas to life.”

Facebook
Twitter
Pinterest
WhatsApp
Previous articleTwitter Accounts on which ban will be removed after Musk takeover – Alex Jones, Mike Lindell and more
Next articleTruth Social Error- How to fix the error while opening TruthSocial.com