The People’s Convoy is an American counterpart of the Trucker’s Freedom Convoy that recently took the Canadian capital of Ottawa by storm in January. The group protests against the covid-19 vaccine mandates issued throughout the nation, as well as the state of emergency related to the pandemic. The protesters plan to rally in numerous places in the United States over an 11-day long itinerary.

The leaders of the People’s Convoy call themselves a “peaceful and unified transcontinental movement” consisting of hundreds of truck drivers in a 15 – mile long convoy. The People’s Convoy hit the road on 23rd February from Adelanto, California and has rallied in many places including Springfield and the Capital Beltway, an interstate highway surrounding Washington DC. 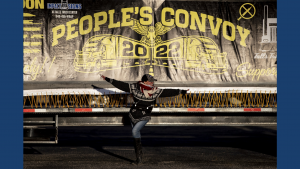 The People’s convoy has received support from a variety of faith – based groups like The Unity Project, The America Project, American Foundation for Civil Liberties and Freedoms, and the US Freedom Flyers. The protest has gained popular support from common citizens as well.

David Wright, a former truck driver from Springfield said,“We’re not getting (the government’s) attention any other way, (The People’s Convoy is) doing this to get someone’s attention to change things and they’re all sticking together on (the trip), and I like that.”  “I would love to follow them all the way.” -he added. 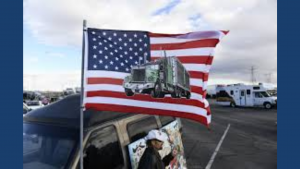 The US truckers’ protest has raised a huge amount of funds adding up to approximately $1 million, a few days into their nationwide rally, as claimed by the People’s Convoy website. The truckers also received non – monetary donations like gas, food and other essentials from vendors along the way. It appears that the protest has also drawn financial support from a conservative organisation called the American Foundation for Civil Liberties and Freedoms in partnership with controversial figures like General Michael Flynn and Dr. Aaron Kheriaty.

The truckers started from Adelento, California, making numerous stops along the way, with the final destination being the Capital Beltway interstate area in Washing DC. As listed on the People’s Convoy official website, the complete route is provided below: 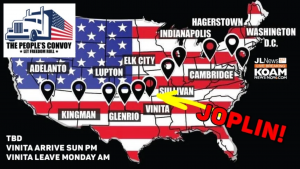 The truckers paused for a break in Indianapolis.

In preparation for the People’s Convoy heading to DC on March 5, officials have tightened security in the Capital Beltway area for they fear a scenario similar to the Jan 6 Capitol Hill insurrection. The officials are also concerned about possible traffic disruption in the Beltway area. The leaders of DC and the Capitol Police have requested the National Guard to be deployed. Lloyd Austin, the Secretary of Defense approved the deployment of 700 – 800 men from the National Guard on Tuesday. The troops will remain unarmed and no arrest shall be made. 50 “large tactical vehicles” will also be stationed alongside the troops for additional security.

The legacy of Freedom Convoy alive in People’s Convoy 2022.