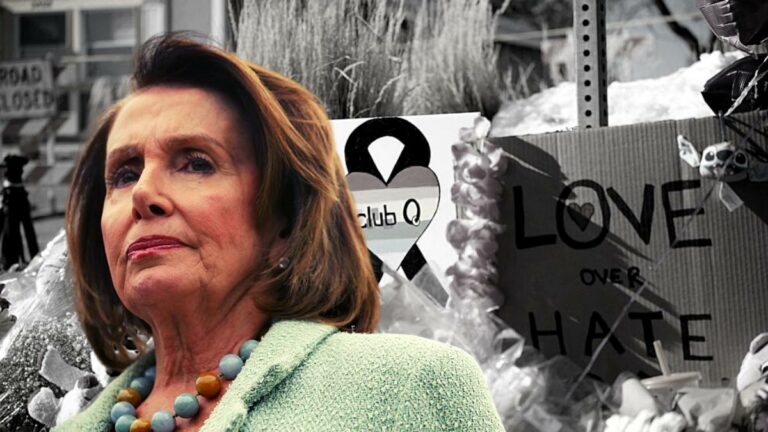 Democrat House Speaker Nancy Pelosi blamed “MAGA Republicans” for anti LGBTQ violence. Her remarks came before the news of the attack at Colorado Springs’ Club Q. She issued another press release in response to the news.

“Americans awoke this morning to horrific news: a brutal attack on an LGBTQ nightclub in Colorado Springs.  Our hearts break at the senseless slaughter of least five beautiful souls and the many more injured or forever traumatized, at what was a sanctuary of safety and solidarity,” she said.

To commemorate Transgender Day of Remembrance, the Speaker’s office issued a press release in which she blamed Republicans aligned with former President Donald Trump for the brutal attack on the LGBTQ community.

“As our nation marks Transgender Day of Remembrance, the House Democratic Caucus mourns the countless Americans stolen away by the scourge of transphobic violence, a crisis that continues to disproportionately harm trans people of color.  Today, and every day, let us offer comfort to grieving loved ones, honor the memory of those killed and continue fighting to save lives from the wicked forces of hate,” said Pelosi.

A gunman opened fire on an LGBTQ nightclub in Colorado Springs, Colorado, last Saturday night, claiming the lives of at least five people and injuring 25 others. Just before midnight, bullets ripped through Club Q, where patrons were enjoying the party and dancing to the sounds of thumping music.

After heroic club goers managed to take him down, a 22-year-old accused shooter wasimmediately taken into custody alive by the police. The entire lethal shooting took place in a matter of minutes.

The club described it as a “hate attack” on its Facebook page. El Paso County District Attorney Michael Allen said investigators were still determining a motive and whether to charge it as a hate crime. The suspect’s charges “will almost certainly include first-degree murder,” he said.

President Joe Biden said that though the objective behind the shootings was not yet clear, “we know that the LGBTQI+ community has been subjected to horrific hate violence in recent years.”

“Places that are supposed to be safe spaces of acceptance and celebration should never be turned into places of terror and violence,” he said. “We cannot and must not tolerate hate.”

The shooting brought back disturbing memories of the 2016 massacre at Orlando’s Pulse gay nightclub, which killed 49 people. Colorado has seen a number of mass shootings, including one at Columbine High School in 1999, another at a movie theater in suburban Denver in 2012, and another at a Boulder supermarket last year.

It was the sixth mass killing this month, and it came just a year after the deaths of 21 people in a school shooting in Uvalde, Texas.