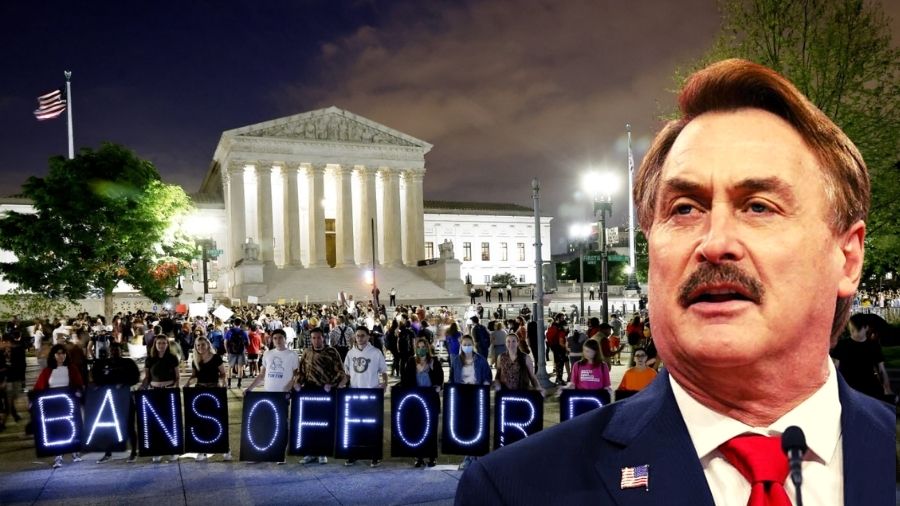 Lindell, who was in Arizona for a campaign event for gubernatorial candidate Kari Lake when the news broke, told The Daily Beast that the timing was “suspicious” and a “deflective” move because it came two hours before the premiere of “2000 Mules,” a film accusing illegal voting in the 2020 presidential election.

“You follow me? What kind of timing is that? So instead of more and more evidence and information about what happened in the 2020 election, that becomes the news, “Lindell said in an interview with the Right Side Broadcasting Network.

What was there in the draft which was released by the Supreme court?

In a leaked recent draft opinion released on Monday, Associate Justice Samuel Alito of the Supreme Court called the 1973 landmark Supreme Court ruling legalising abortion right across the country “egregiously wrong from the start.” Abortion would then remain legal in the United States until the court issues a final ruling, which could happen as soon as June when the bench rules on another abortion case.

The draft, however, was enough to make reproductive rights activists and abortion doctors nervous. If Roe v. Wade is overturned, abortion will be illegal in 23 states, with additional restrictions in several others. Lindell claimed in an interview with The Daily Beast that the leak was related to the release of “2000 Mules.” Former President Donald Trump praised the film, which was created by conservative film-maker Dinesh D’Souza, saying it revealed “great election fraud,” a claim that has been widely discredited since he lost the 2020 presidential election.

The Trump campaign had also filed dozens of lawsuits alleging voter fraud in the aftermath of the 2020 presidential election results, the majority of which have been denied, dismissed, or withdrawn. Independent election activist groups have repeatedly stated that voter fraud is not widespread.

The New York Times, for example, contacted election officials in every state after the results were released, and each said there was no evidence that fraud influenced the presidential election. Trump, however, has maintained that the vote was rigged even after leaving office. Lindell and other Republican lawmakers have echoed his unsubstantiated claims.

Michael James Lindell, also known as the “My Pillow Guy,” is a businessman, conservative political activist, and conspiracy theorist from the United States. He is the founder and CEO of My Pillow, Inc., a company that makes pillows, bedding, and slippers. Lindell has been a vocal supporter and adviser to former US President Donald Trump.

Lindell played a key role in supporting and financing Trump’s efforts to overturn the election result after Trump’s defeat in the 2020 presidential election, spreading false conspiracy theories about widespread electoral fraud. He’s also a proponent of oleandrin, a toxic plant extract, as an alternative medicine cure for COVID-19.

“2000 Mules,” directed by Dinesh Joseph D’Souza, is a unique documentary film that reveals the truth about the 2020 presidential election. “The election of 2020 frightens the American mind,” says celebrated filmmaker Dinesh D’Souza. “A lot of people have a gut feeling that there was a massive, coordinated fraud.”

No one has ever been able to demonstrate it–until now.” The new documentary 2000 Mules is also about a vast network of operatives who were paid to break election laws, and it depicts the truth of what happened behind the “too close for comfort” presidential election. All of the research resources in the film have been represented by a Texas organisation called ‘True the Vote,’ which describes itself as an anti-voter fraud organisation. Cell phone geo-tracking and video files were used to compile all of the evidence presented in the upcoming film.

Dinesh Joseph D’Souza was born on April 25, 1961. He is an Indian-American political analyst, agitator, writer, film director, and conspiracy theorist. D’Souza has written over a dozen books, including several New York Times bestsellers. D’Souza, a native of Bombay, came to America on an exchange programme and later attended Dartmouth College.

He became a naturalised citizen in 1991. From 2010 to 2012, he served as president of The King’s College, a Christian college in New York, before resigning due to an alleged adultery scandal. D’Souza and his wife each gave $10,000 to Wendy Long’s Senate campaign in 2012, with D’Souza agreeing in writing to credit $5,000 from his wife and $5,000 from him. He instructed two others to pay an additional $20,000, which he promised and delivered.

Individual political contributions were limited to $5,000 per candidate at the time under the Election Act. Two years later, D’Souza pled guilty in federal court to one felony count of making an illegal political contribution through a “straw donor.” He was sentenced to an eight-month stay in a halfway house near his home in San Diego, as well as five years of probation and a $30,000 fine. President Donald Trump pardoned D’Souza in 2018. D’Souza is often referred to as a neoconservative.

In the United States, he defines conservatism as “conserving the principles of the American Revolution.” D’Souza argues in his book Letters to a Young Conservative that conservatism is a hybrid of classical liberalism and old virtue, emphasising “the belief that there are moral standards in the universe and that living up to them is the right way to live a full and happy life.” He also criticises the liberal belief that “human nature is intrinsically good” and that “the world’s great conflicts… arise from terrible misunderstandings that can be resolved through ongoing discussion and UN mediation.”