Kemp to hold rally with Pence in Georgia 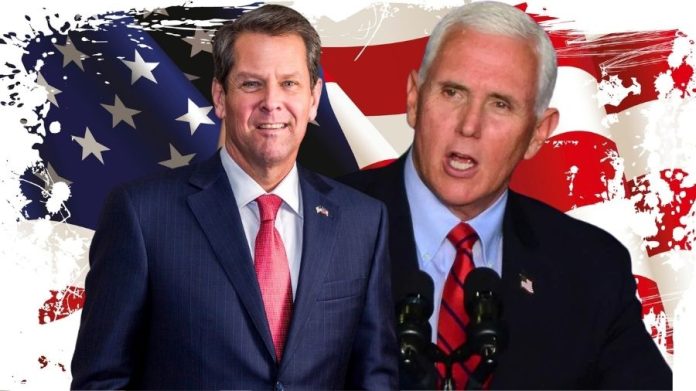 The former Vice President of the United States of America Mike Pence has extended his support to Brian Kemp, the Governor of Georgia who is running for re-election against Senator David Perdue who is backed by former President Donald Trump. Mike Pence believes that it was wrong of the Former President to think that Pence could have played a part in overturning the 2020 presidential elections.

Pence’s separation from Trump has been one of the most significant political breakups to date. The Former President’s top target for this primary is Brian Kemp as he refused to cooperate with Trump to overturn the 2020 presidential elections. Trump further says that there will just be another bad election if the people vote for Brian Kemp. The former president even called Kemp and Pence RINO’s (Republicans in Name Only).

The feud between Brian Kemp, Mike Pence and Donald Trump

Mike Pence, the former Vice President of America, extended his support to Brian Kemp. Pence did this to defy his former boss as Brian Kemp is running against David Perdue who has been backed by Trump. “Brian Kemp is my friend, a man dedicated to faith, family and the people of Georgia,” Pence said in a statement. “I am proud to offer my full support for four more years to Brian Kemp as governor of the great state of Georgia,” said Mike Pence. Pence’s public appearance with Kemp sends a signal that the former vice president rejects the rampant theme of Trump’s political argument that he was robbed of re-election because of voter fraud.

Still infuriated over his 2020 loss to President Joe Biden, Trump has used his endorsements to reward loyalists in GOP primaries and punish those who defied him as he sought to undo legitimate election results in key battlegrounds. Kemp is arguably Trump’s biggest target in the Republican primaries this year. Georgia went blue in the presidential race for the first time since 1992, and Trump heckled Kemp to find a way to reverse those results to give the former president all of Georgia’s 16 Electoral College votes. Trump asked Kemp to call a special session of the state legislature to appoint a new slate of electors- a request Kemp refused. “Today, the worst ‘election Governor’ in the country, Brian Kemp, loaded the great state of Georgia with RINOs,” Trump said.

Brian Kemp, born on 2nd November 1952, is an American businessman and politician. Kemp is also the 83rd Governor of Georgia since 2019. Brian Kemp is a member of the Republican party and he also served as the 27th Secretary of state of Georgia for 7 years from 2010 to 2018.

After completing his education at the University of Georgia, Kemp began his career by owning several financial institutions, agribusinesses and real estate companies. Kemp later went on to join the world of politics in 2002. In 2002, Kemp was elected to the Georgia State Senate. Later he was appointed as the Secretary of State by then Governor of Georgia Sonny Perdue. In 2017, Kemp announced that he was contesting the Georgia Gubernational elections against Lieutenant Governor Casey Cagle.

Kemp later won the Georgia Gubernational elections with 408,595 votes. Brian Kemp became a supporter of Trump and adopted policies and themes akin to Trump. Once Kemp was appointed as the Governor of Georgia in 2019 he brought into being many policies regarding the economy, prohibiting abortion after six weeks of pregnancy, election laws and health care facilities. Kemp is now running for re-election with the support of Former Vice president Mike Pence. Trump and Kemp have now had a feud since the 2020 presidential elections. After Former President Trump lost in Georgia, he said that he was ashamed he ever extended his support to Brian Kemp.

Michael Richard Pence is an American politician, broadcaster, and lawyer. Pence served as the 48th Vice president of the United States of America during the presidency of Donald Trump. Pence was also the 50th Governor of Indiana and a member of the U.S. House of Representatives.

After graduating from Indiana University Robert H. McKinney School of Law, he began his career working for a private practising law firm. Pence did many other side jobs like acting and even did a few talk shows of his own The Mike Pence show etc.

Pence rejuvenated his political career by running for the U.S. House of Representatives again in 2000 and this time, he won a seat in Indiana’s 2nd congressional district. Pence ran for re-election four more times and won all of them. Pence later contested the 2012 gubernatorial elections and won. He brought into being many policies like the gun policy, education policy, energy and environment policy etc. Pence later in 2017 was appointed as the vice president of the United States of America under then-President Donald Trump.

Donald John Trump, born on 14th June 1946, is an American politician, media personality and businessman. Trump was also the 45th President of the US and the first American President without any previous government or military service. He also co-produced and hosted the reality TV show The Apprentice. After graduating from the Wharton School with a bachelor’s degree, he became the President of his father’s real estate company and renamed it The Trump Organization. He diversified the business by entering the construction industry, and also had many side ventures.

Trump later joined politics. In 2000, he tried running for the California and Michigan primaries but later dropped out. Trump even contemplated running for the presidency in 2011 against Barack Obama but later announced that he won’t run. Trump contested in the 2016 presidential elections and won against Democratic nominee Hillary Clinton. Trump served as the President till 2020 when he lost the 2020 presidential elections to Democratic nominee Joe Biden.

For those who wish to attend the rally but won’t be able to due to any reason, please keep checking our website for details. We here at The Conservative Nut will be live streaming the event for you on the day of the rally. Stay tuned!