Katie Stolark Arrington was born on December 6, 1970. She is an American businesswoman and politician. She served in the South Carolina House of Representatives from 2017 to 2019. She was preceded by Jenny Horne and was succeeded by Con Collins.

In June, she beat former South Carolina Governor and incumbent Congressman Mark Sanford in the Republican primary for South Carolina’s 1st congressional district, only to lose in the general election to Democrat Joe Cunningham in November.

She thus delivered the seat to Democrats. She then became the Office of the Under Secretary of Defense for Procurement and Sustainment’s top information security officer for acquisition.

The career of Katie Arrington

In 1995, Arrington and her husband filed for personal bankruptcy after filing for and receiving food assistance. They are no longer married. She utilized the funds from the sale of a company she founded, the Breakfast Club of America, to launch a career in real estate development. She was later employed by a small defense contracting firm. 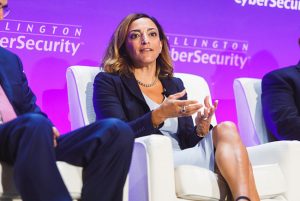 In the latest news, on February 8, 2022, Arrington declared that she will run for the 1st congressional district in South Carolina again, this time against incumbent Nancy Mace. On February 9, she earned former President Donald Trump’s support.

Going back in time, in 2019, Arrington began working for the United States Department of Defense as a “highly qualified expert” and then applied for and was accepted into the nonpartisan Senior Executive Service. She worked at the Office of the Under Secretary of Defense for Procurement and Sustainment as the top information security officer for acquisition. Due to charges of illegal sharing of sensitive material from a military intelligence agency and misuse of office, the Department placed her on leave and suspended her security clearance in 2021.

Arrington’s most controversial campaign was the 2018 US House Campaign. In the 2018 election cycle, Arrington declared she will run for Congress in South Carolina’s 1st congressional district, challenging Mark Sanford for his seat in the House. The Republican primary received national media interest because it was considered as a test of how independent a Republican representative might be from President Donald Trump. Sanford has been a vocal opponent of Trump since his inauguration.

Only four Republicans in the House voted against Trump’s agenda more frequently than Sanford. During the campaign, Arrington launched advertisements condemning Sanford for not being strong enough in his support for Trump.

Jenny Horne, her predecessor in the statehouse, had given up her position to run against Sanford in 2016 but lost. During the campaign, it was noted that Arrington, who made her pro-Trump sentiments a focal point of her campaign, looked to be critical of Trump in 2016.

She complimented Mitt Romney on the night he delivered a condemnation of then-candidate Trump, whom Romney branded “a phony, a fraud” and someone who was “playing the American public for suckers” in a March 2016 Facebook post. Arrington also backed Marco Rubio in the Republican presidential nomination race in 2016.

Arrington has three children with her first marriage. She later married RLA Associates’ owner, Rob Arrington. Arrington was critically injured in a car accident on June 22, 2018, when a drunk motorist traveling the wrong way on a highway hit her vehicle. Arrington had to have parts of her small intestine and colon removed after suffering a back fracture and damaged ribs. Arrington was born in the Virginia town of Fairfax. Her family relocated to Syracuse, New York when she was a youngster. Arrington went to Canisius College in Buffalo, New York after high school, but dropped out during her second year to marry her first husband, Doug Homrich.

This is exactly why when the aforementioned 2018 scandal happened, that support was threatened and hindered. However, Trump ultimately chose to back Katie.

Carrie Dann from NBC wrote, “In his second last-minute endorsement of the afternoon, President Donald Trump is backing Katie Arrington in her primary against his sometimes-critic incumbent Rep. Mark Sanford.

What’s more, Trump not endorsing Sanford includes an allusion to the “hiking the Appalachian Trail” scandal that rocked Sanford’s career and his marriage when he admitted to an extramarital affair with an Argentinian woman.”