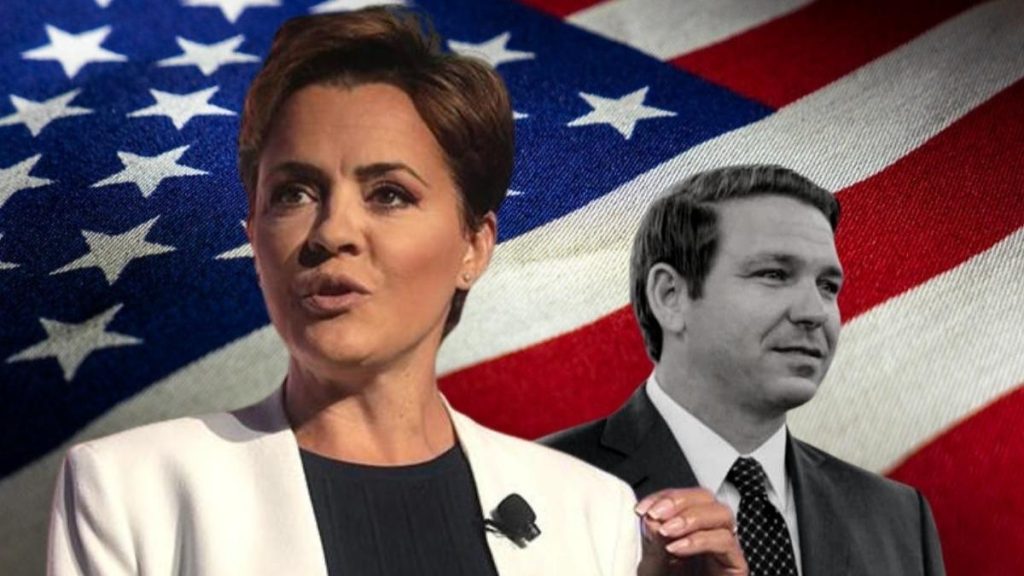 Kari Lake, Arizona’s Republican governor candidate, has been mocked for her comments at the Unite to Win rally in Phoenix. She claimed that former President Donald Trump and Florida Governor Ron DeSantis have “BDE.”

“I call it ‘big DeSantis energy,” Kari Lake faces ire over her comments

She called Mr DeSantis “gutsy”, before adding: “He has bigger – okay, wait let me think about how I want to word this. My staff always says, ‘Whatever you do, do not say balls.” The Arizona gubernatorial candidate continued saying, “That guy has a backbone made of steel. I’ll tell you what he’s got… I don’t know if you’ve heard of this but he’s got BDE. Everybody know what that means?”

“ Ask your kids about it later,” she added, saying, “I call it ‘big DeSantis energy.” The popular phrase is a general euphemism for hyper-masculinity.

The ‘BDE’ comment did not sit well with many, and soon, Twitter was flooded with backlash for Kari Lake over her comments. Her remark was quickly shared widely on social media, with many people mocking the Republican.

“The party of ‘family values’ strikes again,” California governor Gavin Newsom wrote in a post on Twitter, along with a video of Lake’s speech.

Daylin Leach, a former senator added, “These days, whenever I watch the news, I feel like I’ve taken too much acid.”

“This is of course so juvenile that it will be – as it should be – mocked and ridiculed,” said writer and commentator Bill Kristol. “But if I can make a serious if obvious point: The cult of the Leader isn’t just ludicrous. It’s dangerous. In a way, it can be particularly dangerous if it can be easily dismissed as ludicrous.”

Jenna Ellis, a former senior adviser and counsel to ex-president Donald Trump, also took offence to Lake’s remark at the Turning Points USA-sponsored event on Sunday. Ellis was a prominent member of former president Donald Trump’s legal team, led by Rudy Giuliani, that sought to overturn the results of the 2020 presidential election, which President Biden won by more than 7 million votes. For those efforts, legal advocacy groups filed ethics complaints against the Colorado attorney.

Uh-oh! Twitter is on fire because I said President Trump & Gov @RonDeSantisFL both have “BDE”

I stand by what I said. 🤷‍♀️ pic.twitter.com/eaJ1PhYAhA

Even amidst all the backlash, the former TV presenter seems unfazed by all of it. Lake said in a post on Twitter that she continued to stand by what she said. “Uh-oh! Twitter is on fire because I said President Trump & Gov @RonDeSantisFL both have “BDE” I stand by what I said,” read the Twitter post.

Florida Governor Ron DeSantis was also present at the rally alongside Lake. The Florida Governor’s visit to Phoenix came at the end of a week fraught with hassle in which the FBI raided former president Donald Trump’s private estate at Mar-a-Lago in Palm Beach, Florida. 11 sets of classified documents were seized during the raid. According to the unsealed search warrant, Mr. Trump is being investigated for destruction, removal, or destruction of records, obstruction of an investigation, and violating the Espionage Act provision related to gathering, transmitting, or losing defense information. While he did not explicitly mention Trump by name, the Florida Governor criticize the FBI’s search. He further said it is another example of agencies being “weaponized to be used against people that the government doesn’t like.”

“They’re enforcing the law based on who they like and who they don’t like. That is not a republic. Well, maybe it’s a banana republic when that happens,” he said, after referencing the FBI’s investigation of Democratic presidential candidate Hillary Clinton’s use of a private email server.

“Why has this been able to happen? It’s because Congress lets these agencies get away with it,” he said. “What I hope we see if Republicans take majorities, is use the power you have under the Constitution to bring accountability to a bureaucracy that’s totally off the rails.”