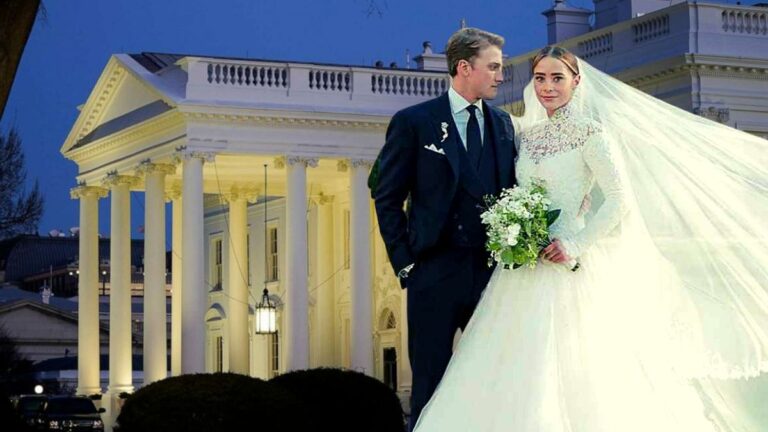 Naomi Biden, the oldest granddaughter of US President Joe Biden, married her fiancé, Peter Neal on the White House South Lawn. At 11:00 am on Saturday, Joe Biden’s granddaughter walked down the aisle dressed in an elegant, full-sleeved Ralph Lauren gown in front of approximately 250 guests. As invitees sat in rows, the grounds were appropriately decorated with white flowers.

“It has been a joy to watch Naomi grow, discover who she is, and carve out such an incredible life for herself,” the president and First Lady Jill Biden said in statement, adding, “Now, we are filled with pride to see her choose Peter as her husband and we’re honored to welcome him to our family. We wish them days full of laughter and a love that grows deeper with every passing year.”

The most recent was in 2013 for former President Barack Obama’s chief photographer, Peter Souza, who tied the knot in the Rose Garden. Jenna Bush’s wedding ceremony and main celebrations were held at her family’s ranch in Crawford, Texas, in 2008. However, her father, President George W. Bush, hosted a party at the White House with 600 guests for his daughter’s second reception.

Following the ceremony, there was a luncheon, followed by a reception with dancing. Close family members were present. The evening reception at the executive mansion concluded the series of wedding events, where dessert was served and guests shook a leg.

Last September, Neal proposed to Naomi Biden with an emerald-cut diamond set in the band of his grandmother’s engagement ring. Naomi and Peter announced their engagement in 2021 via an Instagram post. In the comments, they were greeted with congratulations and blessings.

Naomi Biden revealed the location of their wedding ceremony on in July through a Twitter post, writing that she was “not sure how best to update,” adding that she and Neal had “finally figured out where the ceremony will be… and much to the relief of the secret service and with the dogs’ endorsement… we’ll be getting married on the South Lawn! Couldn’t be more excited”.

Naomi Biden is a lawyer by profession while Peter Neal is a law student. Naomi is aged 28, and Peter, 24. Naomi and Neal met through a mutual friend in New York City about four years ago and have been together ever since, according to the White House.

Naomi is named after the Joe Biden’s first daughter, Naomi, who died as a baby in a car accident that also killed his first wife in 1972. According to US press reports, Naomi Biden plays an significant role in the president’s inner circle and has pressed him to run for president in 2020, for example.