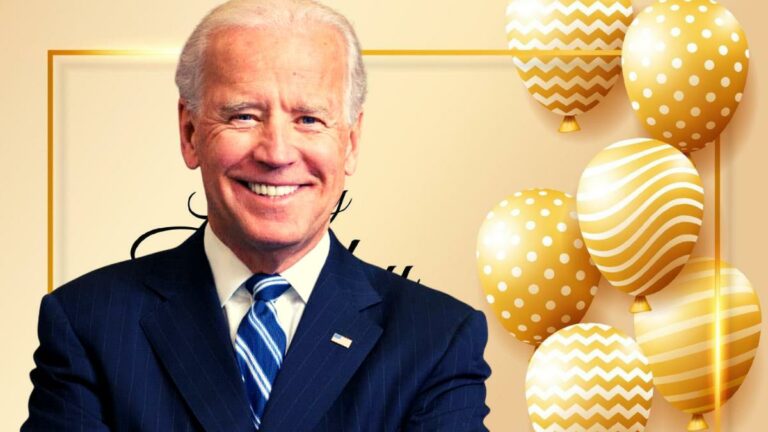 On Sunday, US President Joe Biden turned 80, becoming the first octogenarian to hold office as the president of the United States. President Biden’s birthday comes as he faces speculation about whether he will launch another White House bid and questions about whether he is too old to serve another term.

The 80-year-old Democrat president’s birthday celebrations took place in Washington along with a brunch organized by first lady Jill Biden, as described by White House press secretary Karine Jean-Pierre. Jill Biden shared a photo of the president blowing out a candle on top of a coconut cake, surrounded by balloons.

Jill Biden, President Biden’s wife and First Lady His wife wrote him a lovely birthday message on her official Twitter handle along with two pictures in which they are seen smiling and dancing. “A perfect birthday celebration filled with so much love – and Joe’s favorite coconut cake!”

A perfect birthday celebration filled with so much love — and Joe’s favorite coconut cake! pic.twitter.com/w7005Cdtqu

In another post, the first lady wrote, “There’s no one else I’d rather dance with than you. Happy Birthday, Joe! I love you.”

Former President Barack Obama also extended his best wishes to President Biden in a Tweet that read, “Happy birthday, @JoeBiden! There’s a lot to celebrate these days, and I couldn’t be more grateful that America has you sitting behind the desk.”

Birthday wishes aside, many are now concerned about the octogenarian President launching another White House bid. President Biden has failed to dispel voters’ concerns about his age, with increasingly frequent gaffes and literal stumbles at times reinforcing doubts about his health and mental acuity.

Polls show that voters, including those in his own party, are concerned about the president’s age. According to a November poll, 70% of voters agreed that the phrase “too old to work in government” described Biden strongly or slightly. 59% of Democrats agreed.

According to the same poll, 55% of all respondents believe former President Donald Trump is too old for public office. Trump, who announced his candidacy for president in 2024 on Tuesday, turned 76 in June. Florida Governor Ron DeSantis, the GOP primary voters’ second choice, is 44.

If he decides to run for president again and manages to win, President Biden would be an unprecedented 86 years old by the time he completes his second term. In comparison, some of the oldest living presidents were still years younger than Joe Biden. For instance, Donald Trump completed his term at the age of 74, while Ronald Reagan finished two terms by the time he reached 77.

For his part, the president insists that voters who are concerned about his age should look at his record of accomplishments since being elected.

“Well, they’re concerned about whether or not I can get anything done. Look what I’ve gotten done,” President Biden said in an interview last month. “Name me a president in recent history that’s gotten done as much as I have in their first two years.”

The 80 year old Democrat President said last month that while he has not yet made a formal decision about another White House bid, he does intend to do so. But he has long said that it is a decision that will be influenced by his family members.