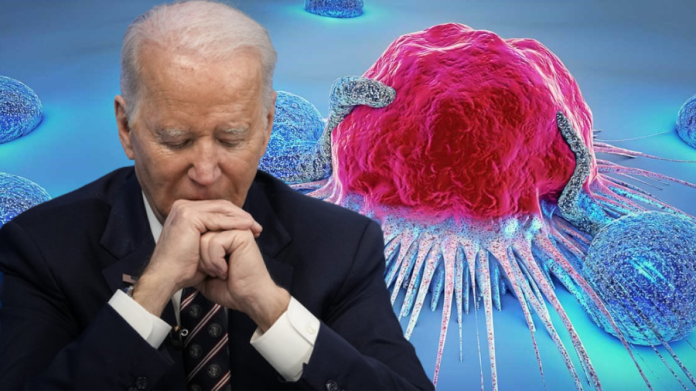 US President Joe Biden is no stranger to making gaffes in public. And unfortunately, these blunders have become even more frequent. And the most recent one, has made it pretty clear why the White House is always so keen on keeping the media away from him. It might also explain why President Joe Biden refrained from engaging in too many speaking engagements during the initial weeks  of his terms.

Does President Joe Biden have cancer?

It wasn’t long ago that Biden was reading teleprompter directions aloud. At this point, the White House has had numerous occasions to correct Biden and set the record straight on what he truly means. This time, the US President has revealed to the entire nation that he might be suffering from cancer. Speaking from Massachusetts about his favorite agenda, i.e., “clean energy”, Joe Biden revealed his plans to convert one of the defunct coal plants of the state into a clean energy program site. In an attempt to drive his point home, Biden started to draw in his personal experiences.

Referring to an anecdote from his childhood, the 79-year-old US president said,  “My mother drove us rather than us being able to walk and guess what? The first frost, you know what was happening? You had to put on your windshield wipers to get literally the oil slick off the window. That’s why I – and so damn many other people I grew up with – have cancer and why for the longest time, Delaware had the highest cancer rate in the nation.” “I grew up with…HAVE CANCER”. This stunningly casual statement by Joe Biden has the nation talking. But how much of it is an actual gaffe?

Biden says he has cancer – Gaffe or true?

A little while after President Joe Biden publicly declared he has cancer, White House officials set to work, to clarify what he actually meant.

Officials clarified that the president was referring to the skin cancer treatment that he taken last year. Skin cancer is generally not life-threatening, and is quite common among older adults who did not use sunscreen in their youth.

Joe Biden’s physician,  Dr. Kevin O’Connor, revealed in the President’s health report last year that he was not suffering from any current cancers. O’Connor’s report also attributed Biden’s skin cancer to excessive exposure to the sun, and not the chemicals used in the oil industry.

Also Read: Roe v. Wade was overturned; Biden called it ‘a sad day’ for the court and the nation

“America can be described in a single word-Asufutimaehaehfutbw”

Among all of his long list of blunders, President Joe Biden attempt to describe the United States of America in a single word is the funniest one yet, and has left netizens in splits.

A video of the US President and Vice President Kamala Harris went viral on the internet. In the video, Joe Biden could be heard saying, ““America is a nation that can be defined in a single word.” The single word came out like “Asufutimaehaehfutbw”.

America is a nation that can be defined in a single word:

Shaking hands with an invisible person

Biden just finished his speech and shook hands with nobody pic.twitter.com/XLndAZcHiD

Right after finishing his speech at a rally held at North Carolina Agricultural and Technical State University in Greensboro, Joe Biden turned away from the podium, and put out his hand. We’re all still trying to figure out who exactly he was attempting to shake hands with.