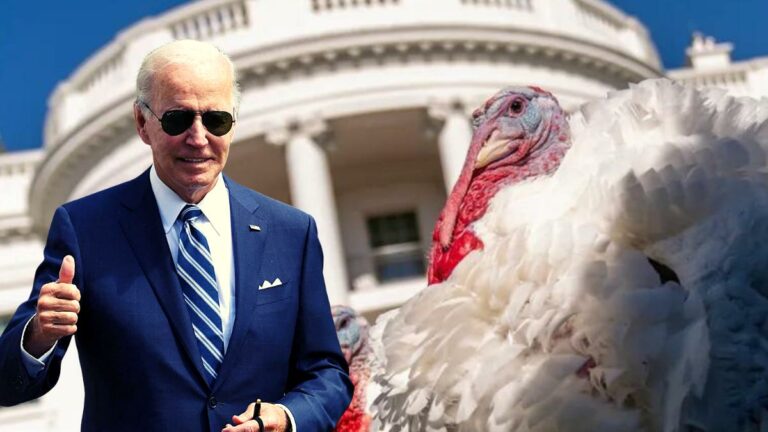 US President Joe Biden made the annual turkey pardon ceremony a fun event with a series of puns and witty remarks that brightened the mood on the White House’s South Lawn on Monday. In addition to pardoning the pair of Thanksgiving turkeys named Chocolate and Chip, Biden used his brief address to poke fun at Republicans.

Using Thanksgiving as an example, President Joe Biden joked about the GOP’s inability to occupy the United States with its “red wave.” “The only red wave this season will be if our German shepherd Commander knocks over the cranberry sauce at our table,” he said, as he granted clemency to the lucky duo of turkeys.

Throughout his remarks, the 80 year old Democrat President sprinkled Thanksgiving-themed puns besides mocking the right wing.

“It’s a wonderful Thanksgiving tradition here at the White House,” America’s first octogenarian president said as he welcomed the two turkeys named Chocolate and Chip out onto the South Lawn. “There’s a lot to say about it, but it’s chilly outside, so I’m going to keep this short. Nobody likes it when their turkey gets cold!”

While President Biden’s remarks began on a positive note, he went a little too far when he falsely claimed that Delaware, his home state, has the highest chicken population in the United States. “We have more chickens than anybody in the nation in Delaware, but we don’t have turkeys,” said the president.

The White House custom of issuing a presidential pardon to keep a pair of turkeys off the Thanksgiving dinner table dates back 75 years, almost as long as Biden himself. The turkey pardon ceremony was inaugurated by President George H.W. Bush in 1989, but the practice may date back to the Lincoln administration.

The gobblers were named Chocolate and Chip this time, after the president’s favorite ice cream flavor. According to the National Turkey Federation, which sponsors the turkey tradition that dates back to 1947 and President Harry Truman, Chocolate and Chip were born in July in Monroe, North Carolina.

The gobblers, each weighing nearly 50 pounds, arrived in Washington from North Carolina on Saturday night and checked into a room at the Willard hotel near the White House to await the presidential decree on Monday. They will both spend the rest of their natural lives on the North Carolina State University campus.

Chocolate and Chip gobbling and the president’s pet dog, Commander, barking from the Truman balcony punctuated the brief ceremony in bright sunshine where two of his young grandchildren were also watching the event.

“I was worried if he came down here with all of you, he’d just do nothing but kiss you and lick you,” the president said. “But he may go after the turkeys, so I kept him up there.”

The President concluded his remarks on a much serious note, encouraging Americans to get coronavirus and flu vaccines ahead of the holiday season.