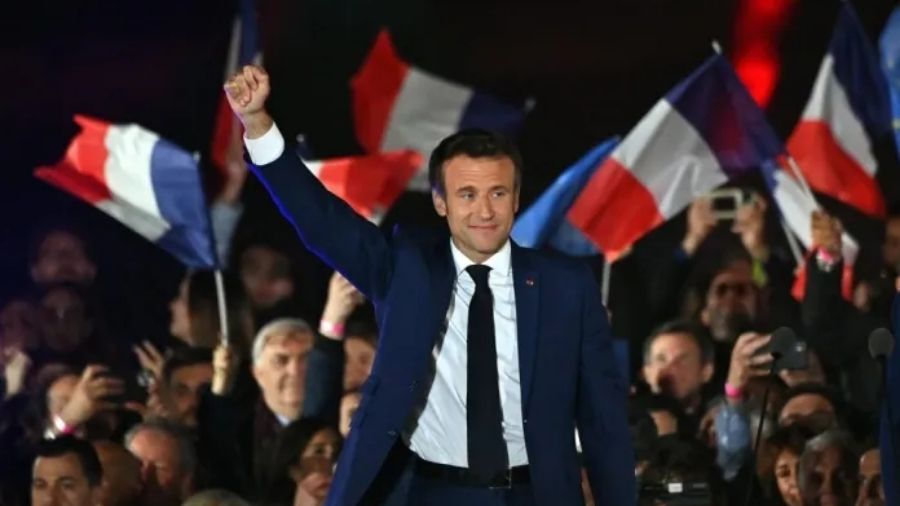 Emmanuel Macron has been re-elected as France’s president for another five years following a resounding victory over competitor Marine Le Pen, who received the extreme right’s largest vote percentage yet.

At the foot of the Eiffel Tower, the centrist leader assured exuberant supporters that now that the election was over, he would be a “president for all.”

He is the first sitting president to be re-elected in 20 years. In 2011, Marine Le Pen took over the party founded by her father, Jean-Marie Le Pen, in an attempt to achieve electability. On Sunday, she received more than 13 million votes on a platform that included tax cuts to combat rising living costs, a ban on wearing the Muslim headscarf in public, and a referendum on immigration curbs.

“An answer must be found to the anger and disagreements that led many of our compatriots to vote for the extreme right,” Mr Macron said in his victory speech. “It will be my responsibility and that of those around me.”

A third of voters indecisive

Over a third of voters did not cast a ballot for either candidate. Over three million voters submitted spoiled or blank votes, resulting in the lowest turnout in a presidential run-off since 1969.

Although much of France was on vacation on election day, the low turnout reflected voter apathy, as voters complained that neither candidate represented them. The BBC reported that voters who indicated they were casting blank ballots sought to punish the current president.

Macron “adrift in an ocean of contentions”

Anti-Macron protesters gathered in a number of towns, including Paris, Rennes, Toulouse, and Nantes, to reject the outcome.

Mr. Macron, 44, said in his speech that his administration would have to “answer their choice to refuse to choose.” Jean-Luc Mélenchon, the far-left leader who was narrowly defeated by Ms Le Pen in the first round of voting two weeks ago, was critical of both candidates.

While it was excellent news that France had rejected Marine Le Pen, he stated that Mr Macron had had a poorer election result than any prior president. “He floats in an ocean of abstentions, and blank and spoiled ballots.”

Reactions from the United States and Europe

European leaders were relieved by Mr Macron’s victory, as they had expected a far-right candidate who would propose a series of anti-EU policies.

The first to applaud him was German Chancellor Olaf Scholz, who highlighted their shared challenge in responding to Russia’s war on Ukraine. President Joe Biden of the United States also expressed his desire for “close cooperation,” including support for Ukraine.

While Mr. Macron has played an important diplomatic role in the fight, Marine Le Pen has been dogged by claims of ties to the Kremlin. Volodymyr Zelensky of Ukraine thanked him as a “genuine friend” and expressed his hope for a strong and unified Europe.

Boris Johnson, the Prime Minister of the United Kingdom, congratulated him on his triumph.

Congratulations to @EmmanuelMacron on your re-election as President of France. France is one of our closest and most important allies. I look forward to continuing to work together on the issues which matter most to our two countries and to the world.

For his victory address, Mr Macron chose the Champs de Mars, a hugely historic location from the French Revolution. He walked to the platform, flanked by his wife Brigitte and leading a group of children, to the tune of the EU song Ode to Joy, pledging supporters that “no one will be left by the wayside.” He said he would be thankful to voters who had backed him to keep the far-right out of power for years to come.

The cost-of-living crisis that millions of French citizens are experiencing became the election’s top issue, with the president’s opponents accusing him of arrogance and acting as a president of the wealthy.

Prime Minister Jean Castex, on the other hand, told French radio that the president’s re-election sent a strong message at a time when France was undergoing a significant crisis marked by “many differences and a lack of understanding.”

Mr Castex is expected to be replaced in the coming days, and Mr Macron may appoint Labour Minister Elisabeth Borne as his replacement. She refused to say whether she was being groomed to be the future prime minister, arguing that the priority should be to address people’s concerns about living standards. Clément Beaune, a cabinet colleague, said the president was very interested in having a female prime minister.

The next job for France’s political leaders is to reorganise and campaign for parliamentary elections in June. Mr Macron may have a majority for the time being, but defeated first-round candidates are already planning a new campaign, and according to one poll, 63 percent of voters want him to lose his majority.

If that happens, he will be compelled to “coexist” with a government run by other political groups. Mr. Mélenchon has previously stated that he believes he can beat the president’s centrist party and become Prime Minister.

Ms Le Pen told supporters in a rally on Sunday night that the “battle is not totally over” and that the risks of Mr Macron retaining complete authority were significant.

For the time being, there is no talk of a leadership transition in her National Rally party. “Everything will be rebuilt around her,” spokeswoman Laure Lavalette told French television. “She is at the forefront of this popular and social bloc.”