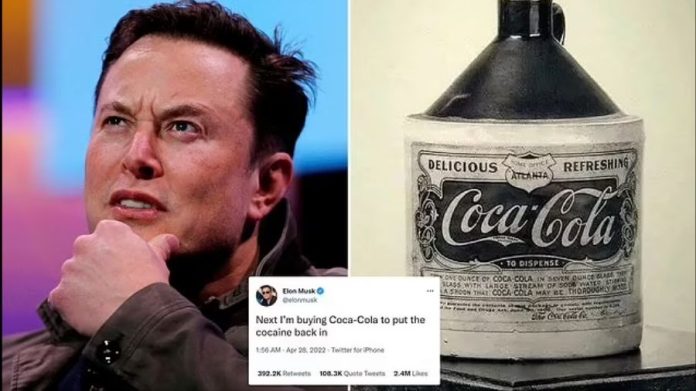 After finalising a multi-billion dollar takeover deal with big tech social media company Twitter a few days back, Tesla CEO Elon Musk tweeted that he now plans to acquire the soft drink brand Coca Cola to “put the cocaine back in”. Musk made the Tweet in the late hours of Wednesday that read, “Next I’m buying Coca-Cola to put the cocaine back in”. 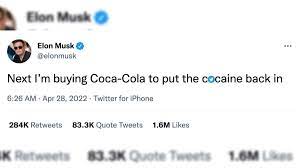 Elon Musk’s Coca Cola tweet sparked a flurry of humorous responses, including one that implored Elon to “bring it back” and shared an image of what appears to be one of the first publicly sold Coca-Cola bottles in 1894 – though this could not be verified and could be an image of a larger container used to serve the drink. 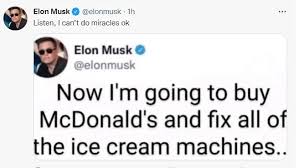 Another Twitter user doctored Musk’s tweet to what read as “Now I’m going to buy McDonald’s and fix all the ice cream machines…’’. The billionaire entrepreneur traded the joke and responded through his Tweet that read, “Listen, I can’t do miracles, ok.”

In a follow-up Tweet, Musk said, “Beats the hell out of Red Bull!”

Coca-Cola is one of the world’s most recognizable and beloved carbonated soft drink brands, and the refreshing, although unhealthy, fizzy brown beverage is consumed by millions of people all around the globe, every single day. However, when chemist John Stith Pemberton created the original Coca-Cola formula in 1886 in a pharmacy in Atlanta, Georgia, he referred to it as a “brain tonic.” Coca-first Cola’s advertisements positioned the beverage as a cure for ‘Morphine, Opium Habits, and Desire for Intoxicants.’ 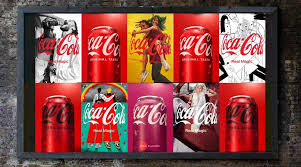 However, the two ingredients that gave Pemberton’s soda drink its name were highly addictive. Coca-early Cola’s versions contained kola nut powder to provide a caffeine boost, as well as coca leaf extract, which contained trace amounts of cocaine – around 3.5 milligrams per bottle until 1903 when it was removed. 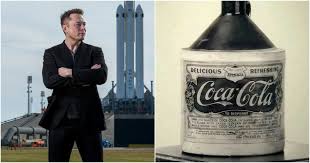 Sugar syrup spiced with citric acid, nutmeg, vanilla, and Chinese cinnamon oil were also included in the original recipe. However, the high caffeine levels in Coca-Cola persisted until the end of World War One. By 1908, anti-drug campaigners were criticizing America’s growing reliance on the drug and calling for a national ban. In 1909, a Texan politician stated, ‘The reason they put this dope in Coca-Cola is to create a constant craving for more and thus sell the drink.’ Coca-Cola remained steadfast and continued to caffeinate its beverages until World War I drove up prices due to scarcity. Coca-Cola cut the quotient in half in 1918, to today’s levels – a can now contains roughly half the caffeine of a shot of espresso.

Ever since Tesla CEO Elon Musk’s takeover deal worth $44 billion dollars with big tech Twitter got confirmed, the conservatives have been pushing Musk to reinstate several of the Republican leaders who were banned from the social media site in the past few years.

Conservatives have pointed out that Twitter is biased because it suppressed news about Hunter Biden’s laptop before the 2020 election and has de-platformed several prominent conservatives, including former President Donald Trump. Former President Donald Trump has decided not to re-join Twitter, despite Elon Musk’s takeover. The Bluebird company has become “too boring” according to the ex-president. He will stick to his own social media platform, Truth Social, which has recently been launched in February.

Facebook
Twitter
Pinterest
WhatsApp
Previous articleUS Economy shrinks by 1.4% in first quarter of 2022, making it the worst quarter in 2 years
Next articleOver 2 million signatures on a petition for Amber Heard to be removed from Aquaman 2