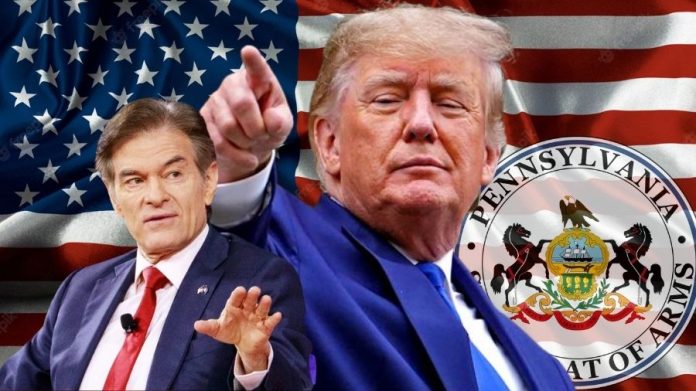 While Americans called it a night after watching the Pennsylvania election results with Dave McCormick leading Trump-endorsed candidate, Mehmet Oz 31.2% to 31.1% in the race to win the seat vacated by Pat Toomey in the Pennsylvania Senate, the following day did a 180-degree flip on the results.

Late yesterday, the results showed the complete opposite, with Oz receiving 31.2 per cent and McCormick receiving 31.1 per cent. According to the New York Times, the lead was just over 1200 votes. Thousands of votes are still outstanding — many of them mail-in ballots — and it could take weeks to count them, according to several reports. If the margin of victory is 0.5 per cent or less, Pennsylvania law requires an automatic recount. If there is a recount, the final results will be submitted to the Pennsylvania Department of State on June 8.

Following the turn in results, erstwhile President Donald Trump took to his social media platform Truth Social to bash the authorities in Pennsylvania, implying that they cannot count ballots efficiently.

“Here we go again! In Pennsylvania, they are unable to count the Mail-In Ballots. It is a BIG MESS,” Trump wrote on Truth Social.

Trump also called on the surgeon-turned-politician to just “declare victory” as he might not be able to do so later if “they found out”.

“Dr Oz should declare victory,” Trump wrote further in his post. “It makes it much harder for them to cheat with the ballots that they ‘just happened to find.”

Trump also targeted The Club for Growth, a powerful conservative interest group with which he has regular clashes. The club spent millions of dollars supporting conservative radio host Kathy Barnette, whose campaign appeared to be nearing its end. Barnette is currently in third place, far behind Oz and McCormick in terms of vote totals.

“The Club For Growth Candidate, who lost, took many votes away from Oz,” Trump continued. ‘Also, early Mail-In Ballots were sent without my having endorsed yet. Despite all of this, Oz won!”

Election Day votes are still being counted in some counties, according to MSNBC’s Steve Kornacki. It is also true that Oz is currently favouring better in mail-in voting from Lancaster County, which has the largest stack of uncounted GOP mail-in ballots, according to Kornacki. According to Decision Desk HQ, Oz has a.2-percentage-point lead over former hedge fund manager David McCormick, with an estimated 94 per cent of the vote in. If that margin holds, the race will be automatically recounted.

Trump thinks Oz is a “gentleman” but the crowd says otherwise

At a Save America rally in Pennsylvania a few weeks ago, the surgeon-turned-politician, who is running for the US Senate and does not even live in the state, walked on stage in front of thousands of Trump supporters, booing him and making it clear that they were not there to support him.

Oz’s remarks were brief and focused on pro-MAGA issues, such as praising Fox News host Sean Hannity and criticizing big pharma and Democrats for wanting people to be “sheeple.”

“The shocking reality is the Green New Deal – it’s a lie, it’s not real, it can’t be done the way they say it. I’m telling you as a scientist. But as a leader, I’m also going to be clear, we’re going to push back on that,’’ he said, taking aim at the progressive energy and environmental proposal.

‘’Republicans have been fighting,’ he continued, ‘you know, walking into this culture war knife fights with index cards. Index cards don’t work there, you’ve got to go in there with your fists sometimes – metaphorically,’’ Oz said.

Facebook
Twitter
Pinterest
WhatsApp
Previous articleTruth Social web version launched ahead of its May 31st deadline: What does this mean for the Truth Social brand?
Next articleRon DeSantis: ‘Nobody Has Done More to Help the Cartels than Biden’