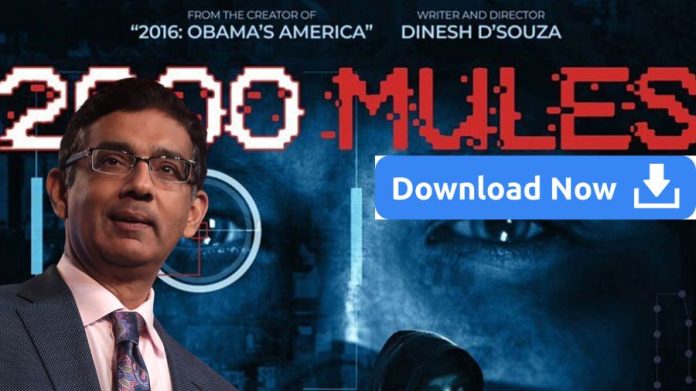 What’s this movie about?

The documentary 2000 Mules is about the alleged ballot trafficking and uncovering the truth of the 2020 presidential elections. This movie supports the claims of Former President Donald Trump that Joe Biden won the 2020 presidential elections by fraudulent means. The movie portrays the trail of ballot harvesting that facilitated Joe Biden’s victory. The malpractice of a particular electoral candidate accumulating votes from absentee voters is known as ballot harvesting.

Dinesh D’Souza claims that he has collected evidence regarding ballot harvesting during the election with the help of satellite cell phone tracking. The title of the film is 2000 Mules. The people who facilitate the malpractice of ballot harvesting have been referred to as Mules. Some mules were also caught on 4-minute long surveillance footage across the country while other Mules were caught in the act in 6 counties dropping off ballots at 27 different drop boxes. The resources have been researched and provided by a Texas organization called “True The Vote”. This organization pronounces itself as an anti-voter fraud organization.

“True the Vote” has said it found some 2,000 ballot harvesters by purchasing $2 million worth of anonymized cellphone geolocation data that track a person’s location based on app activity in various swing counties across five states. Later by drawing a virtual boundary around a county’s ballot drop boxes and various unnamed nonprofits, it identified cellphones that repeatedly went near both ahead of the 2020 election. Using satellite cell phone tracking, identified 242 mules in Atlanta that went to an average of 24 drop boxes.

You can visit the 2000 Mules official website and watch it online or download it. The movie 2000 Mules was released in only selected theatres on 2nd May and 4th May. The Film 2000 Mules was exclusively streamed on SalemNow on 8th May. We will keep you updated on any source that offers this movie 2000 Mules. Stay Tuned to The Conservative Nut.

Dinesh Joseph D’Souza born on 25th April 1961 is an Indian-American. He is a filmmaker, conspiracy theorist, a right-wing author and political commentator. D’Souza’s books are known to be New York Times bestsellers. Dinesh D’Souza has produced many controversial documentary films. Dinesh Born in Bombay, India came to America in a student exchange programme and graduated from Dartmouth University. He later got his citizenship in 1991.

He has produced films like Obama’s America, America: Imagine a world without her, Hillary’s America, Death of a Nation, Trump card and his latest film 2000 Mules. He also authored many successful books like The End of Racism, What’s so great about America, The Enemy at Home: The Cultural Left and its responsibility for 9/11, The roots of Obama’s rage and many more. All of Dinesh D’Souza’s movies and books have been controversial to them due to the promotion of controversy and falsehood.

After D’Souza finished college he worked as the editor of a monthly journal called The Prospect. This publication was financed by Princeton alumni. For 2 years Dinesh D’Souza worked for a conservative journal called Policy Review as their editor. In 1985, D’Souza wrote a journal titled “The Bishop as pawns.” In this journal is proposed the theory that the Catholic Bishops in the United States of America were being manipulated by the American Liberals.

An overview of the claims made about the 2020 Presidential elections

“Ever Since the 2020 elections, I have been almost completely silent on the topic because I’ve been frustrated by the fact that one on the one hand you have the pompous and absurd declaration by the left that this is ‘the most secure election in the history, that seems unlikely on the face of it just given how many rules were thrown out of the window in the COVID environment, but nevertheless, they insist it was. And on the other side, we’ve had a combination of suspicion and accusations and assertions but not the kind of proof that would satisfy even the conservative that is eager to believe that there was coordinated fraud”. – said Dinesh D’Souza in an interview.

True to Vote claims that At least 2,000 “mules” were paid to illegally collect ballots and deliver them to drop boxes in key swing states ahead of the 2020 presidential election. In Philadelphia alone, they identified 1,155 “mules” who illegally collected and dropped off ballots for money. The organization further goes on to make claims such as that if this large scale fraud of ballot harvesting had not happened, Donald Trump would have won the 2020 presidential elections.