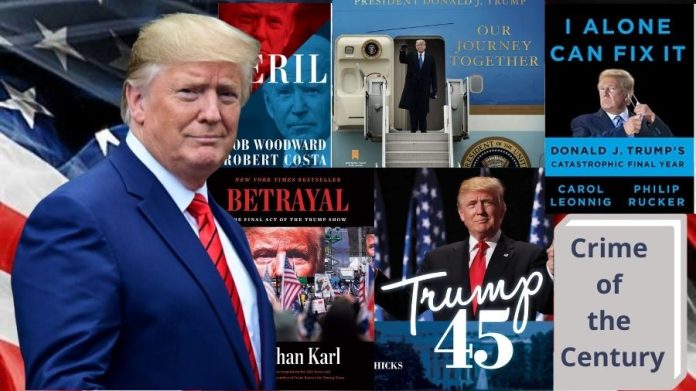 More than a year after Joe Biden’s victory in the 2020 presidential elections, former President Donald Trump is still determined to prove his claims that the 2020 election was rigged and Biden won by fraud.

Donald Trump has stated that he is working on a book based on his allegations of election fraud. And the book will be “depressing,” but the story has to be told for “historic reasons”, he claims. Trump called the 2020 presidential election “the crime of the century” and told a crowd of rallygoers in Austin, Texas, over the weekend that he was working on a book with the same title.

“I’m actually writing a book about it called The Crime of the Century,” he continued, according to Newsweek. “I don’t think you’ll enjoy it. You’ll be very depressed when you read it, but we want to have it down for historic reasons.”

Donald Trump’s upcoming book will be published by Winning Team Publishing, a publishing house co-founded by Donald Trump Jr. and other Trump allies that focuses on books by conservative authors, announced the book on Twitter as well.

“NEW BOOK ALERT: CRIME OF THE CENTURY by President Donald J. Trump!” the company tweeted, adding that more details will be coming soon.

“This is the greatest hoax, heist”

Two weeks ago at the Texas rally, Trump continued to attack the integrity of the election, implying that votes were tampered with, causing him to lose the presidency. “This is the greatest hoax, heist,” he said. “This is one of the greatest crimes in the history of our country. And sadly, the prosecutors don’t want to do anything about it.”

Trump was also joined by conservative filmmaker Dinesh D’Souza in the Texas rally whose latest documentary titled 2000 Mules also provides exclusive evidence that the 2020 presidential election was rigged and shows the stuffing of ballots.

Last week, Trump and D’Souza criticized two of the most reputed news outlets, Fox News and Newsmax for not covering the film, which both the networks denied.

The former president took to his brand new social media site, Truth Social to express his disappointment against Fox News. “Fox News is no longer Fox News,” -he wrote. “They won’t even show or discuss the greatest & most impactful documentary of our time, “2000 Mules.” The Radical Left Democrats are thrilled – They don’t want the TRUTH to get out.”

Trump’s disdain echoes that of Dinesh D’Souza who last week accused Fox News along with Newsmax of not providing coverage of his documentary. Earlier this week, D’Souza accused Tucker Carlson and Fox News of telling Catherine Engelbrecht, his 2000 Mules co-star and founder of the anti-voter fraud group True the Vote, not to talk about the film, and claimed Newsmax was also “blocking coverage.”

“I was booked on Grant Stinchfield’s Newsmax show and then the network cancelled on me. Criticise the move if you like, but why isn’t this a legitimate news story? How can so-called news networks pretend it doesn’t exist?” D’Souza tweeted from his official Twitter account last week.

Newsmax responded to D’Souza’s accusations saying that they have “covered 2000 Mules, including airing its trailer dozens of times, airing President Trump’s comments on it, and featuring 2000 Mules in our daily podcast.”