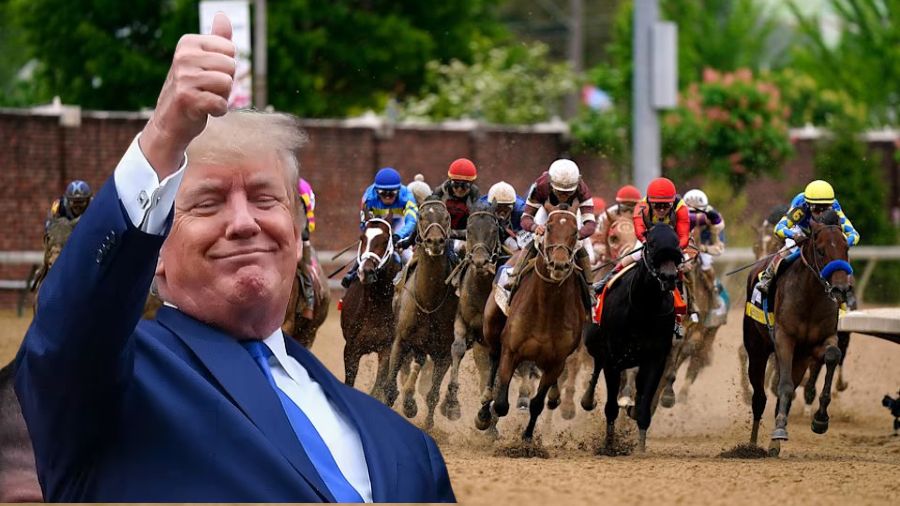 Trump arrived at Churchill Downs at 6 p.m. for his $75,000-per-person event. His arrival was concealed from the general public and the press. The event is part of his ongoing battle with his home state’s Senate Minority Leader, Mitch McConnell. He was led inside the track via a side hallway previously used by caterers and employees, where his entourage greeted him with an American flag and a Kentucky flag.

Before he came, the staff closed drapes to keep the press and public at bay, while FBI operatives in camouflage with automatic guns stood guard.

Whispers about Trump’s arrival circulated among the crowd, which had been backed up for twenty minutes. ‘Trump, Trump, Trump,’ some exclaimed. Others appeared to be upset by the wait.

About The Kentucky Derby

The Kentucky Derby is a horse race held annually in the American city of Louisville, Kentucky. This race is held almost always on the first Saturday in the month of May. The event is spanned over two weeks in the month of May. The tradition of the Kentucky Derby has been followed for 146 years. It started on May 17th 1875. This sport is also known in the United States as “The Most Exciting Two Minutes in Sports” or “The Fastest Two Minutes in Sports” because the race only spanned two minutes.

The Tradition of the Kentucky Derby had been uninterrupted since when it started in 1875. When all Professional sports leagues cancelled their events due to worldwide pandemics or the great depression or even during the world war the Kentucky Debry continued its tradition. It wasn’t even stopped for the worldwide COVID pandemic. The Kentucky Derby was merely rescheduled to be conducted in September 2020, never for this prestigious tradition to be broken. The Derby recently took place on 7th May 2022 and former President Donald Trump was in attendance.

Things you may not know about Trump

Donald John Trump Born on 14th June 1946 is an American politician and a businessman. Donald Trump was the 45th President of the United States of America and he is a member of the Republican party. Trump is also the founder of Trump Media & Technology Group a media and technology platform to give the Big Tech companies a run for their money. After graduating from the Wharton School with a bachelor’s degree he became the President of his father’s real estate company and renamed it The Trump Organization. He diversified the business by entering the construction industry, he also had many side ventures.

Donald Trump joined politics in the year 2000. This was when he tried running for the California and Michigan primaries but later dropped out. Donald Trump even considered running for the presidency in 2011 against then-President Barack Obama but later announced that he won’t contest the elections that year. Trump later contested in the 2016 presidential elections winning against Democrat Nominee Hillary Clinton. He served as the President till 2020 when he lost the 2020 presidential elections to Democrat Nominee Joe Biden.