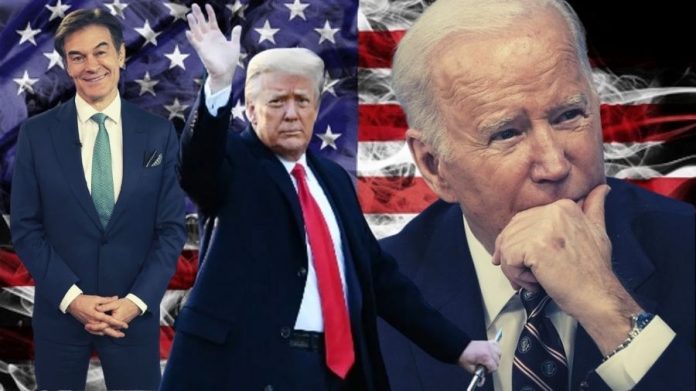 Speaking at another one of his Save America rallies from rainy and weather-beaten Greensburg on Friday, former President Donald Trump made it clear that dissolving President Joe Biden’s new Disinformation Governance Board will now be one of the top priorities in getting Republicans elected to Congress.

The board was announced by Biden’s Department of Homeland Security (DHS) last week, with the goal of combating misinformation about homeland security issues, particularly online. Republicans slammed the board as dystopian, comparing it to Orwell’s ‘Ministry of Truth.’ They also claimed that it would be yet another attempt by Democrats and the government to police what conservative voices say online.

At the rally in Pennsylvania on Friday, organised in support of endorsed candidate Dr Mehmet Oz for U.S. Senate, Donald Trump said, “One of our highest priorities will be to cut down on left-wing censorship and restore free speech in America. We don’t have free speech.”

‘We don’t have free speech and we have a totally crooked press, all of them back there.” Trump said, adding, “We will immediately terminate Joe Biden’s so-called disinformation governing board, how about that one? A chilling and un-American power grab that we will not allow to stand.”

Trump thinks Oz is a “gentleman” but the crowd says otherwise

At the Save America rally in Pennsylvania on Friday, the surgeon-turned politician who is running for the US Senate, and who doesn’t even live in the state, walked on stage amidst the crowd of thousands of Trump supporters, booing him, and making it clear that they were not there to support him.

Oz kept his remarks brief and focused on pro-MAGA topics, such as praising Fox News host Sean Hannity and criticising big pharma and Democrats for wanting people to be “sheeple.”

“The shocking reality is the Green New Deal – it’s a lie, it’s not real, it can’t be done the way they say it. I’m telling you as a scientist. But as a leader, I’m also going to be clear, we’re going to push back on that,’’ he said, taking aim at the progressive energy and environmental proposal.

“Republicans have been fighting,’ he continued, ‘you know, walking into this culture war knife fights with index cards. Index cards don’t work there, you’ve got to go in there with your fists sometimes – metaphorically,’’ Oz said.

Mr Oz has been dubbed a “Hollywood elite” because of the relationships he formed while working as a daytime TV host. Mr Trump, on the other hand, endorsed him and stressed his electability in the general election.

Trump said of Oz that he is a “great gentleman” and “has the best chances of winning” before calling him onstage.

“You know, we endorse a lot of people a little bit out of the box, you know, they said well, does he endorse front runners? No. JD was not leading – they put an unbelievable, an unbelievable amount of negative crap just like they’re doing with Oz, the same thing. They’re spending millions and millions and millions of dollars. And they’re trying to hurt him so badly. I just think he’s gonna win.” -Trump said.

“He’s a great gentleman. I’ve known him so long,’’ Trump said of Oz, adding that the celebrity surgeon has ‘’by far the best chance to win.”

“His show is great, he’s on that screen, he’s in the bedrooms of all those women. He’s taking a lot of horrible, unfair and untrue shots.”-Trump said further.